It’s been a while since my last book haul post – two months, in fact – which goes some way to explaining the number of books which appear in this one. Someone needs to put more hours in the day so I can actually get around to reading some of them… 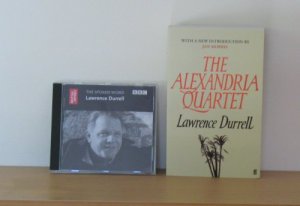 This year, of course, is the Durrell Centenary. So I’ll be rereading The Alexandria Quartet at some point, and I thought I’d buy myself the new paperback edition so I could do so. The CD is a collection of poetry readings, interviews and, er, Durrell singing.

Ballard is not a young man’s writer – not enough shit gets blown up, for a start; and then there’s that cynicism – so while I’ve read many of his stories and books over the years it’s only in the past few I’ve come to really appreciate his fiction. As a result, I’ve been building up a small paperback collection of his books – and they are attractively packaged paperbacks, these 4th Estate ones.

I am not, it has to be said, a particularly big fan of all the titles that have appeared in the SF Masterworks series, and most people don’t spend money on books they know they don’t especially like… but… they make a set. They’re packaged to look the same – or they were until they revamped the entire series. And some of them really are genre classics: Hyperion and The Fall of Hyperion, certainly; and much as I loathe Harlan Ellison and his works, I have to admit Dangerous Visions was an important anthology.

From my trawls through various charity shops some books from the would-like-to-read list. I’ve been working my way through Litt’s alphabetical oeuvre, though none have especially impressed me so far. McCarthy should only be read when you’re feeling unaccountably cheerful and would like to torpedo your good mood. The Satanic Verses is infamous, but I’ve never read it. The Mailer was a swap from readitswapit.co.uk, and I’m  not sure why I bought The Apple.

So Long A Letter is May’s book for this year’s reading challenge (see here). Cyclonopedia has been repeatedly recommended by Jonathan McAlmont, and Berit Ellingsen is one of the contributors to Rocket Science (plus, the cover art of The Empty City is the National Congress building in Brasilia – see later). 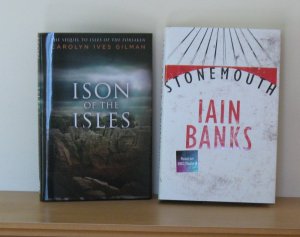 A pair of 2012 hardbacks: I pre-ordered Ison of the Isles as I was so impressed with its preceding volume, Isles of the Forsaken (see here). And Stonemouth is Banks. Enough said.

The Steerswoman’s Road is an omnibus of The Steerswoman and The Outskirter’s Secret. I’ve read the first, but not the second. The other three books are ones I want to read. Palimpsest was a charity shop find, The Godless Boys was from Richard Palmer in payment for a copy of Adrift on the Sea of Rains, and The Dervish House was from an unmentionable and unmentionably large online book retailer.

Three genre titles for the collection – both Remaking History and Moon Dogs are signed (and those two authors pretty much describe the two endpoints of the type of sf I like best). The Ice Monkey is really hard to find in hardback but I lucked out. 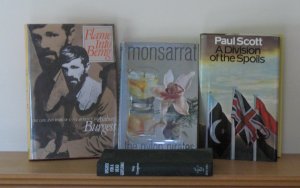 I collect first editions by Anthony Burgess, and I’m interested in the works of DH Lawrence, so Flame into Being neatly covers two of my literary interests. The Nylon Pirates is one of Nicholas Monsarrat’s potboilers – he managed to write potboilers and literary fiction with equal facility if somewhat variable results. A Division of the Spoils is the third book of the Raj Quartet, and Disguise for a Dead Gentleman is DG Compton in his initial guise as a crime writer. I expect good condition first editions of those early “Guy Compton” books are extremely difficult to find, so this tatty one will have to do.

I spotted mention of these chapbooks by Michael Swanwick from Dragonstairs Press somewhere and decided to take a punt on them.

If I ever visit Brazil, it won’t be for the carnival, the beaches, the cocktails, the culture… it’ll be to see the buildings in Brasilia. I love the fact that even unfinished, or badly weathered, they still embody the optimistic future past decades imagined we’d all share. The man chiefly responsible, of course, was Oscar Niemeyer. Eastmodern is more Warsaw Pact architecture, a collection of photographs of modernist buildings in Slovakia, and some of them really are quite skiffy.

The giant book on ekranoplans was research for a story, honest. Or it will be when I’ve thought of an idea for story which has ekranoplans in it. Well, I managed it for flying boats (see here), so anything’s possible. Besides, if Sebastian Faulks can include one in his 007 novel Devil May Care, why shouldn’t I? Marswalk One is one of several Mars book I now own and which I will use as research while writing the second book of the Apollo Quartet (I got it very cheap on eBay). Dark Moon is one of those fake Moon landing nutjob books, and I thought it might prove entertaining. The Fallacy of Fine-Tuning is also research for Apollo Quartet book 2.