This month’s book was somewhat delayed as I’ve been focusing on reading and writing about books related to Apollo 11 for my celebration of the 40th anniversary of the lunar landing. You can find those reviews on my Space Books blog here.

But on with the reading challenge…. My edition of James Blish’s Jack of Eagles is a 1977 Arrow paperback with cover art by Chris Foss. I suspect it was bought for me some time around then. So I must have been twelve or thirteen when I first read it. I actually have a number of Blish novels from that period – all with Foss cover art – as he was one of my favourite sf authors at the time. Which made rereading Jack of Eagles an interesting exercise. 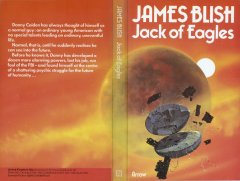 The novel is about Danny Caiden, a young man who develops psychic powers – precognition, telepathy, teleportation, telekinesis, etc. – and subsequently becomes embroiled in a secret war between two groups of powerful psychics, one of which is bent on taking over the world. With the help of a parapsychology professor at a local university, Caiden learns how to control his new-found powers… but it is only when he comes into conflict with the Brotherhood In Psi that he discovers he is the most powerful psi ever.

There’s a definite sense of time and place to Jack of Eagles. It was expanded from a 1949 novelette, ‘Let the Finder Beware’, and with its mention of the GI Bill and other details, it’s clearly set a few years after the end of World War 2. The book is also, like much of Blish’s fiction, well written. But. And this is a problem I had with his The Quincunx of Time when I read it at the end of last year. That too had originally been a short story – which I’d read – but Blish had not chosen to expand the plot, or provide more details of the setting. Instead, he’d used the greater wordcount to waffle on about the bogus science and philosophy which underpinned the book’s central idea – a faster-than-light communication device which allowed people to pick up signals from the future.

And I suspect the same thing happened in Jack of Eagles. The first half of the novel is a relatively straightforward action story – Caiden loses his job, and seeks to learn more about his burgeoning powers by visiting various “experts”. But there’s a long section in which the parapsychologist, Dr Todd, tries to explain the scientific basis of Caiden’s powers, referencing some mangled form of quantum mechanics and the Many Worlds Hypothesis. It’s pointless, implausible guff, and it slows down the story to a crawl.

Later, during Caiden’s battle with the Brotherhood, he escapes by travelling into alternative futures – explained once again by the bogus science of earlier. Each of the futures he visits is interesting, but Blish spends far too long trying to explaining the how of it and his explanations ring false and spoil the atmosphere.

I can’t remember what it is about Blish’s stories and novels that appealed to me when I was in my early teens. Rereading them now, thirty years later, it’s plain that Blish was a good writer. But he seems to have this bad tendency to pad out his novels with implausibly bogus science and philosophy. He should have just finessed it. The explanations interrupt the pace of the narrative and add little or nothing to the story. They probably seemed impressive to a naive thirteen-year-old. Perhaps that was the attraction of Blish’s novels. That and the Chris Foss cover art, of course.

I’m tempted to try reading or rereading a Blish novel that wasn’t expanded from a shorter piece, just to see if it’s the expansion process which led to him padding out the story with scientific bollocks. Perhaps he didn’t do that for stories which were originally planned to be novel-length. The only difficulty is finding such a novel in his oeuvre.

Jack of Eagles was certainly better than the other books I’ve read for this challenge. I’m not entirely sure what it is about the book which originally appealed to me all those years ago, but I doubt I’d have become a fan if I’d read it at my current age. All the same, I still think Blish is a pretty good sf writer, and I won’t be purging my shelves of his books…