So it’s the Worldcon in two and a bit weeks, and this year it’s in Dublin. And I’m going to be there. Last time I was in Ireland was around fifty years ago, so my memories of the trip are pretty much non-existent. Something else that happened fifty years is the Apollo 11 moon landing. And, somehow or other, I seem to have been put on a bunch of panels on that very subject…

Apollo at 50
16 Aug 2019, Friday 10:00 – 10:50, Second Stage (Liffey-B) (CCD)
Getting men on the Moon was certainly an achievement, but it is nearly 50 years since anyone was there and the Apollo launchers, unlike Soyuz, have been abandoned for years. Beyond the obvious spectacle, was Apollo all for nothing? Was the spectacle itself enough? Panellists consider the legacy of Apollo.
Jeanette Epps, Ian Sales (M), Dr David Stephenson, Geoffrey A Landis , Mary Robinette Kowal

Artemis: Apollo’s big sister
17 Aug 2019, Saturday 11:00 – 11:50, Second Stage (Liffey-B) (CCD)
Recently NASA selected three lunar landers for taking scientific instruments to the Moon. This is the start of many steps towards the goal of returning to the Moon in 2024. What needs to be done, what is planned, and how does this compare with initiatives from other countries?
Jeanette Epps, Becky Chambers, Alan Smale (M), Ian Sales, Geoffrey A Landis 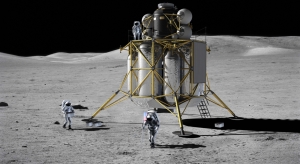 Alternate Apollos
17 Aug 2019, Saturday 13:00 – 13:50, Wicklow Hall-1 (CCD)
We know how the Apollo landings turned out, but it could have gone quite differently. Armstrong and Aldrin could have crashed, or landed safely but been unable to take off again. What might have happened if Apollo 18 and the Apollo Applications programme hadn’t failed? If the Soviet N1 launcher had succeeded, could they have reached the Moon first? Panellists consider alternate histories of Apollo.
Henry Spencer, Ian Sales (M), Dr Laura Woodney, Gillian Clinton

Shoot for the moon: lunar depictions in SFF
19 Aug 2019, Monday 11:00 – 11:50, Liffey Hall-2 (CCD)
For as long as there has been science fiction there has been a fascination with the moon. What role does the moon play in cultures around the world and how do those cultures incorporate it into their speculative fiction? Our panel will discuss why the moon holds such a powerful allure as a subject for writers and whether the discovery of more distant heavenly bodies has had an impact on lunar fiction.
Ian Sales (M), Ian McDonald, Joey Yu, Hester J Rook, Jeffery Reynolds

The good news – sort of – is I’m moderating three of the panels, which means I don’t have to say anything intelligent, just keep the discussion moving. Which is just as well since most of the other panellists are actual rocket scientists. On the one hand, the above are good meaty topics, ones that interest me – one of the reasons, of course, why I wrote the Apollo Quartet. On the other, actual rocket scientists.

The more observant among you will have spotted the names of some successful sf authors above, including a Hugo Award finalist. And, er, also a Guest of Honour. Coincidentally, I’ve read some of their books, although not necessarily the ones appropriate to any of the panels.