I’m not sure what the collective term for books by Anthony Burgess would be, but Burgessery seems to fit – even if it does sound a little rude. Still, it was Burgess who felt science fiction would be better called “futfic” – which sounds just as unwholesome – so I’m sticking with Burgessery.

in the early 1990s. He was another author I discovered via the Daly Community Library in Abu Dhabi. After A Dead Man in Deptford

, it was A Mouthful of Air

, The Kingdom of the Wicked

and Any Old Iron

– and that was just within six months.

Whenever I returned to the UK on leave, I’d hunt out Burgess paperbacks. At some point, I decided I wanted the books in hardback. And that included all the non-fiction he had written. My collection is by no means complete, and only one book – Any Old Iron

– is a signed copy. Burgess was a good deal more prolific than Lawrence Durrell or Nicholas Monsarrat.

Burgess has been described as a great writer who never wrote a great novel. Which is a bit unfair. Earthly Powers

is definitely a great novel. I prefer to think of him as a writer who made a career out of self-indulgence – much as Frank Zappa did in music. Both were extremely talented, so even their most self-indulgent works are interesting. But both also had a tendency to privilege displays of cleverness over accessibility. Who but Burgess, for example, would write a novel in three parts: the libretto of a Broadway musical about Trotsky visiting New York in 1917, the home life of Sigmund Freud, and a science fiction story about an asteroid called Lynx smashing into the earth and ending everything. The book is The End of the World News 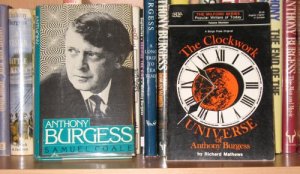