The four novellas which make up Starship Seasons, titled ‘Starship Summer’, ‘Starship Fall’, ‘Starship Winter’ and ‘Starship Spring’, were originally published individually by PS Publishing (of which Drugstore Indian Press is an imprint) and NewCon Press between 2007 and 2012. All four are set on Chalcedony, Delta Pavonis IV, in a future in which starship travel has been superseded by Telemass, interstellar teleportation. The novellas feature David Conway and the circle of close friends he makes when he moves to Magenta Bay on Chalcedony. While the stories share locale and cast, and each novella references events in the preceding stories, they can be read as standalones.

Conway has retired to Chalcedony, a move partly driven by the death of his daughter and the subsequent breakup of his marriage. While hunting for a suitable property on the shore of the idyllic Magenta Bay, he stumbles across a junkyard of starships, run by an ex-pilot called Hawk. Conway decides to use an old ship as a home, but the one he chooses is of mysterious provenance. He settles into a life of indolence – with a great deal of drinking – and makes friends with several of the locals, including Hawk, famous artist Matt, telempath Maddie, and Hawk’s alien lover, Kee (a native of Chalcedony). Conway soon discovers his starship home is “haunted”… by an avatar of the Yall, an advanced alien race who have long since vanished. The Yall admits his race built Chalcedony’s great marvel, the Golden Column, an impenetrable pillar one kilometre in diameter and thirty kilometres high, and of unknown purpose. Conway and his friends, with the help of the Yall ghost, make Conway’s starship operable and fly to the Column… and so discover the mysterious object’s true purpose.

‘Starship Fall’ is set five years later. The fuss over Conway’s discovery of the Golden Column’s purpose – it is, in fact, part of an instantaneous interstellar transport network – has died down. The appearance in Magenta Bay of holo superstar Carlotta Chakravorti-Luna, however, threatens to upset Conway’s life of indolence and drinking. And then Hawk’s alien companion, Kee, vanishes into the jungle to “smoke the bones”, an alien ritual which allows the smoker to snatch glimpses of the future but has a seventy percent fatality rate. Conway, Maddie and Hawk head off into the interior to “rescue” Kee, but unfortunately are too late to prevent her undergoing the ritual. What Kee sees of the future involves Chakravorti-Luna and also Hawk’s possible death. The holo superstar admits she is on Chalcedony to find an ex-husband who crashed on the planet decades before, and this has something to do with the smoking the bones ritual.

The plot of ‘Starship Winter’ is driven by Matt, the artist, who puts on an exhibition of works which use “empathy stones” from the world of Acrab IV. Visiting Magenta Bay is Darius Dortmund, an empath, who is not only unduly interested in Matt’s showing, but is also accompanied by an alien from Acrab IV. Dortmund is arrogant, secretive and a nasty sort. He annoys and upsets Conway and his friends, spoils the grand opening of Matt’s art show, but at a big party in his rented property later is found murdered. Suspicion immediately falls on Conway and his circle, who had stayed over at Dortmund’s house for the night. In this novella, Conway’s circle expands by one: Lieutenant Hannah van Harben of the local police, who becomes Conway’s love-interest.

The final book of the quartet is ‘Starship Spring’. It is six years later. Conway and van Harben are now living together in and have a young daughter, Ella. Their friends are busy off-planet – Matt and Maddie touring Matt’s latest art show, and Hawk and Kee flying rich tourists to some galactic wonder. But soon they will be returning, so all six arrange for a fortnight away at an expensive Chalcedony holiday spot called Tamara Falls. Part of the charm of the place is that it’s apparently haunted… and the ghost makes a number of appearances in front of the six friends and Ella. It also seems to be trying to tell them something. Matt admits that the holiday is being paid for by Dr Petronius, a famous art patron, who insisted on it as a condition of his offer to tour Matt’s art show. Millennia ago, the Yall fought and defeated an evil alien race, the Skeath, who managed to hide a vast army beneath Tamara Falls, ready to be awoken one day to conquer the galaxy. Petronius wants this to happen, and needs Conway and friends and family to be on-hand to trigger it…

There’s something very… comfortable about the stories in Starship Seasons. There’s nothing edgy or outrageous about the world described, nor about the concepts deployed in the stories. That the characters are well-drawn is a given – Brown has been writing sf since the mid-1980s, and he’s very good at it. But each of the central quintet has a secret, and that five damaged people should become such close friends occasionally feels somewhat banal. Except that feels like too harsh a judgement – these are four polished novellas, firmly located in genre heartland, thoughtful and considered in tone, and very much character-centred. They will not disappoint a dedicated science fiction reader even if, in these days of immersion and jump-cuts and “blowing shit up”, these four novellas do feel a little old-fashioned in affect. Entertaining, thoughtful and put-together well, certainly, but… The fate of the galaxy is several times put at risk, the lives of the central and supporting cast are frequently in danger; and yet once the dust has settled, Conway’s life returns to normal. There is progression – the Golden Column supersedes Telemass, Conway and Hannah have a child, the characters grow and heal over the years – yet the victories won in each of the novellas still feel small scale and personal. Sometimes, that’s all science fiction needs.

I’ve known both Keith Brooke and Eric Brown for a number of years – I may well have met them at the first convention I ever attended back in 1989. It’s been a long time, anyway. And throughout those many, many years I’ve also enjoyed their novels and short stories. My collection of both authors’ books is complete – except for their books for YA and younger readers.

Keith’s first three novels, published by Gollancz between 1990 and 1992. Head Shots (2001) is a collection, published by Cosmos Books, and one of the strongest short story collections I’ve read for a long time.

Lord of Stone is fantasy, published by Cosmos Books in 2001; it is very Orwellian and very good. Genetopia was published by Pyr in 2006. The Accord is Keith’s most recent novel from 2009, though he is currently working on a new one, alt.Human. Parallax View is a shared collection, with Eric Brown, of stories set on the same world. My edition is the Sarob Press one from 2000, although a revised edition was published by Immanion Press in 2007.

The Time-Lapsed Man is Eric’s first collection, and was originally published as a paperback in 1990 by Pan. The hardback edition was from Rog Peyton’s Drunken Dragon Press. (There was also a signed limited edition, but I don’t have it.) Deep Future (2001) and Blue Shifting (1995) are collections. Meridian Days (1992) was Eric’s first published novel. It was followed by Engineman (1994) and Penumbra (1999). 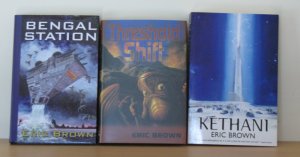 Bengal Station (2004), published by Five Star, is the novel on which the trilogy above was based. It didn’t sell many copies – probably because it was difficult to get hold of. Threshold Shift (2007) is a collection from Golden Gryphon. Kéthani (2008) is a fix-up, and one of Eric’s best books.

Some novellas from PS Publishing: A Writer’s Life (2001) is a supernatural story, rather than sf; The Extraordinary Voyage of Jules Verne (2005) and Gilbert and Edgar on Mars (2009) both feature famous writers as their protagonists.

Some more novellas: Approaching Omega (2005) is a sort of zombie cyborg generation ship story. Starship Summer (2007) and Starship Fall (2009) are set on the same world of Chalcedony and feature the same cast. There are, obviously, two more books to come in the series. Starship Winter is scheduled to appear from PS Publishing later this year.

The Fall of Tartarus (2005) is a another fix-up novel. Helix (2007) was Eric’s first novel for Solaris, and features a unique BDO. Engineman (2010) is a revised edition of the original novel, and also includes eight associated stories. I’ve yet to read Guardians of the Phoenix (2010) or The Kings of Eternity (2011), although Eric assures me the latter is the best thing he’s written.