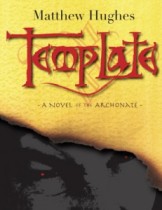 Comparisons between Matthew Hughes and Jack Vance are inevitable, because if any writer is a template for Hughes’ fiction then it is Vance. Hughes’ Archonate novels are set on an Earth not unlike the Dying Earth, or on the worlds of a formless galactic polity called The Spray which resembles the Alastor Cluster (in fact, hussade, from Vance’s Trullion: Alastor 2262, is mentioned in Template).

Like many of Vance’s novels, Template is a bildungsroman, and one in which the protagonist is involuntarily pitched into a quest for his true identity. Said protagonist is Conn Labro, a highly-skilled and indentured duellist on the world of Thrais. Despite his abilities, Labro is a naïf and Thrais, with its culture based on contracts and transactions, has given him poor social skills. So when a regular customer is murdered, leaves him a fortune and an encrypted bearer deed to a planet, and an attempt is made on his own life, Labro has no idea how to respond. Happily, there is a young woman at hand to help him. Labro buys out his indenture and determines to discover his origin and the location of the planet he apparently now owns. The young woman, Jenore Mordene, he “hires” as a guide.

It’s in the nature of such a story’s template that the naïf’s voyage of discovery is as much literal as it is metaphorical. Labro’s bearer deed has determined his destination, Earth, and so he must travel there. En route, he learns something of The Spray – which gives Hughes opportunity to discourse on various cultural templates for societies. For example, one character posits a theory of societies each built upon one of the seven deadly sins. Thrais, with its “transactionalism”, is of course Greed. Unfortunately, Hughes makes little of this idea, using it merely as the topic of conversation.

On Earth, Labro sees all social interactions as a form of transaction. Mordene, however, is from a region of Earth which eschews money, and sees something different. This provides some interesting repartee, but does not advance the plot as such. But it certainly sets the template for their relationship.

It’s only when Labro learns what he has inherited that the villain of the piece steps in to the story. Now the template is Gothic. Not only does the villain remain masked but, as is often the case in such fictions, there is a greater enemy hiding behind him. And this greater villain must be defeated if Labro is to win and keep knowledge of his origin, his legacy, and the girl. And yes, the book’s climax does reveal Labro’s origin. It also explains the story’s title – there is indeed a very real template in the story.

At some point reading Template, everyone is sure to ask why we need Hughes when we have Vance. And the answer is: because we can never have too much Vance. And providing it’s done with invention and wit, then it’s as enjoyable as the real thing. Happily, Hughes matches the wit and invention of Vance. He also brings slightly off-kilter philosophical musings to his stories, and they provide a depth Vance sometimes lacks. Having said that, the writing in Template is a little stilted. While clearly intentional, it’s not entirely successful. Further, Labro is somewhat stiff a character, and Mordene is under-written. Neither characteristic is unexpected – at that intersection of bildungsroman and travelogue, where both protagonist and world are mapped, there’s little room for immersion.