The SF Encyclopedia makes no real comment on the works of Dennis Feltham Jones, preferring instead to précis his novels. He is perhaps best known for his first novel, Colossus, which was filmed as Colossus – The Forbin Project. Implosion, from 1967, is his second novel. 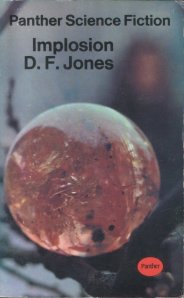 An unnamed Eastern Bloc country develops a substance which renders women sterile. Because the nation’s premier is the illegitimate son of a British diplomat, he chooses to use this powder on the UK. Two years later, fully eighty percent of British females can no longer ovulate. The country’s population begins to fall, and is calculated to hit around five million by the mid-1980s. A government with far-reaching powers and a mandate to fix the problem is voted into power. All the fertile women are put into camps to become baby machines. Children are put in National Schools, where they are kept safe from harm and educated to as high a level as possible. Villages are demolished, and towns abandoned, when their populations fall below sustainable levels.

In charge of all this is John Bart, the Minister for Health and Regeneration. His wife Julia proves to be one of the rare fertile women, and is packed off to a camp. Meanwhile, the government tightens its grip on the country. After a raid on the lab which developed the powder, the Brits reverse-engineer it but can find no cure. They publish the formula, so that now everyone has it. Naturally, other countries soon find themselves in the same situation.

Meanwhile, Julia has come to realise that the regime in the fertile women’s camps has turned nasty. Women are whipped for the slightest infraction, such as smoking (even when not pregnant). She escapes… and discovers that the world outside is very different to what she had been told. She finds her husband, who is still the number two man in the government, and likely soon to be the number one, and learns that he is now shacked up with her twin sister. The twins turn on one another, Julia gets sent back to the camp, and that’s that. Except Nature has one final trick up her sleeve…

There’s a very 1960s British po-faced earnestness to Implosion. The characters are exemplary – Bart himself is young and noble and brilliant at organisation and making decisions. His wife is beautiful and loving and a true soulmate. Or at least, she starts out like that. Even their lady who does is a treasure. The prime minister is a hearty man of the people, straight-talking and more than willing to do the necessary. The Britain of the story appears pretty much the same as the Britain of 1967. Even though it begins in the early 1970s, the currency is still pounds, shilling and pence.

Implosion reads like a novel in which the author had a good idea and then set out to show clever he was in solving it. Its politics are simplistic, as is its view of the British people. The Barts are very much the “right sort”, and what few working class people do make an appearance are viewed with all the patronising indulgence of the privileged. Implosion is not a cosy catastrophe – there’s more brandy drunk than tea, for one thing – but it is peculiarly English. Perhaps it could be called a “Mayfair catastrophe”. That’s what it feels like, a black and white 1960s television Play for Today with a cast speaking in cut-glass accents, while around them the world they don’t much care for slowly falls apart…

So, not a British sf masterwork, then.

(And no, I’ve no idea what that blobby thing on the cover of the book is supposed to represent.)