In my post on Dan Dare last week (see here), I mentioned I owned a copy of Dare by Grant Morrison and Rian Hughes, but seemed to have lost it. If you’ve seen my flat, this probably isn’t much of a surprise. Fortunately, while digging out some books for a post on bandes dessinées – which will appear later today – I stumbled across it. The cat hadn’t sold it on eBay, after all.

Anyway, here it is: 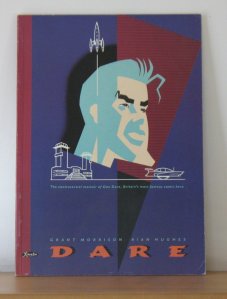 Dare was originally published in Revolver, from 1990 to 1991, but the comic folded before the last installment, so it was completed in Crisis, a 2000 AD spin-off. The trade paperback edition was published in 1991. Copies are not especially hard to find these days, and it’s worth getting.

One thought on “Who dares eventually finds it”