Something must be wrong with me. How else to explain it? It’s been over a month since my last book haul post, and look how few books I’ve bought since then. The mantlepiece, at least, is grateful, as its load was somewhat lighter as I was putting together this post. And the rate of increase in the TBR has decreased a little. You know you’re in trouble when you’re measuring the rate of change in the TBR rather than the actual number of books you own but have yet to read. So it goes.

Some non-fiction: Spacesuit I fancied the look of, chiefly because it includes spacesuits from fiction; but we’ll see how it stacks up against the other books on the topic I own. The Astronaut Wives Club is research for Apollo Quartet 4, and it’s nice when you decide on a topic to write about and someone then goes and publishes a factual work on that very subject. DH Lawrence: Triumph to Exile 1912 – 1922 is the second volume of a three-volume biography of the writer and belonged to my father. I have the first, but now I’m going to have to see if I can get hold of a hardback edition of the third book. 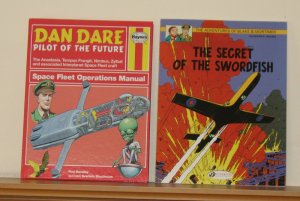 Haynes have branched out from car owners’ workshop manuals, and while I can understand them applying the same formula to various famous aircraft, such as the Avro Vulcan and Supermarine Spitfire, or even the Space Shuttle and Lunar Rover, some of the fictional “vehicles” they cover make less sense – like the U.S.S. Enterprise, the Millennium Falcon, or Gerry Anderson’s Thunderbirds. Still, I’ve been a fan of Dan Dare for years, so I thought the Space Fleet Operations Manual worth a go. It’s… okay. Cutaways of the various spacecraft, thumbnail sketches of the characters and alien races. There’s not much detail. Ah well. The Secret of the Swordfish, Part 1 is the fifteenth volume in the series, and there’s only a few to go before it’s all done. This is the first Blake and Mortimer story, originally published in 1950, and it shows. The artwork is Jacobs’ usual ligne claire style but the story is neither as complex nor as clever as much later volumes.

For the collections: Murder by the Book is Eric Brown branching out into crime, and I’m looking forward to reading it (especially since I know what one of its touchstone works was). I was kindly sent an ARC of The Lowest Heaven but after reading the first story by Sophia MacDougall I decided it was worth buying the limited edition. So I did. Review to follow shortly-ish. The Quarry I bought from Waterstones, and it’s not like I was never going to buy the book in hardback. Five Autobiographies and a Fiction I bought direct from Subterranean Press. Idiot HMRC decided to charge VAT on it, even though books are exempt. I have applied for a refund but it’ll be weeks before I get it. So, of course, they did it to the next book I ordered from the US. I’ve been buying books from publishers and eBay sellers in the US for years without a problem, and then twice in one month they wrongly stiff me for VAT. Stupid HMRC are stupid.

Some charity shop finds: Persepolis, a graphic novel about a woman growing up in Iran. I’ve been there, you know: Persepolis. It was in the early 1970s, we went on holiday to Iran, and stayed in Isfahan, Shiraz and Tehran. At one point, we went to see the ruins at Persepolis. I really ought to see about digitising the cine film my father shot when we were there. Beside the Ocean of Time was a lucky find – I’ve been interested in trying something by George Mackay Brown since seeing him mentioned on, I think, Eve’s Alexandria. Before I Go To Sleep I vaguely recall being one of those literary/mainstream novels based on a sf idea from a couple of years ago. I can’t actually remember what people said about it, however. I guess I’ll find out for myself. Skin of the Soul is a Women’s Press anthology of horror stories by women writers. I wavered on this one – I mean, it’s not sf so I can’t review it for SF Mistressworks; and I’m not a huge fan of horror, anyway. But then I saw Suzy McKee Charnas and Karen Joy Fowler on the TOC, and I decided to buy it.

Finally, two books I bought from Waterstones’ “buy one get one half price promotion”. Guess which one I got for half price: is it HHhH at £8.99 or A Possible Life at £12.99? I really wanted HHhH as I’d heard so many good things about it, but as is always the way with these promotions finding a second book proved difficult. Yes, I did want to read A Possible Life, but not enough that I’d pay near enough thirteen quid for the trade paperback. But there was nothing else that looked remotely interesting. I must have been in a good mood.