I didn’t think I’d bought that many books since my last book haul post back in early June, but when I came to take photos of my recent purchases… Well, there you go. It appears I have bought rather a lot. No wonder my postie just cards me and runs away. 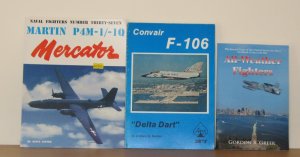 Some aeroplane books to start. I have two or three of Steve Ginter’s Naval Fighter Aircraft series now, but only for the aircraft I actually find interesting, like the Martin P4M-1/-1Q Mercator. The books are well put-together, with lots of photographs and information. Convair F-106 “Delta Dart” and All-Weather Fighters were bought chiefly for research for my moon base novella.

Some sf novels by women writers. Kaaron Warren’s Mistification is one of the few books I kept from the big box of Angry Robot releases I won in the alt.fiction raffle. Jane Palmer’s The Watcher goes with the other Women’s Press sf novels I own, as does Sue Thomas’s Correspondence. Melissa Scott’s Shadow Man is for the 2011 Reading Challenge, and Lyda Morehouse’s Resurrection Code I think was recommended to me by Amazon after I bought Kameron Hurley’s God’s War. I’ll be writing about it here soon.

Some first editions – well, okay, Medium For Murder by Guy Compton, AKA DG Compton, is actually a Mystery Book Guild edition. Selected Poems is signed; as is At First Sight, Nicholas Monsarrat’s second novel, from 1935. Both were lucky eBay finds. First editions of The Bridge are typically expensive, but I managed to find one for a reasonable price.

Some sf paperbacks. I read Gibson’s Sprawl trilogy years ago, but never owned copies. Now I have all three books, I’ll be giving it a reread sometime. I’ve also been picking up Ballard’s books, as I find them far more appealing now than I used to. Embedded is another book from the alt.fiction raffle prize. And finally, two from the relaunched SF Masterworks series – I’m fairly sure I read Simak’s City many, many, many years ago (I was a big Simak fan in my mid-teens); I know I’ve certainly not read Wells’s The Food of the Gods.

Heaven’s Shadow I swapped for my Interzone review copy of Daniel H Wilson’s Robopocalypse with Robert Grant of Sci-Fi London (ta, Robert). I want to read Heaven’s Shadow because it features near-future space exploration; I expect to hate it because it’s a mega-hyped techno-thriller type sf novel. DH Lawrence’s The Lost Girl and Iain Pears’ Stone’s Fall are both charity shop finds. City of Veils is the second of Zoë Ferraris’ crime novels set in Saudi Arabia. I’ve already read it and thought it much better than her first novel, The Night of the Mi’raj.

Some first editions. I have about a dozen of Pulphouse Author’s Choice Monthly mini-collections, and am trying to complete the set. But only the signed, numbered editions. I’ll have to read Newton’s City of Ruin before I tackle the third book in the series, The Book of Transformations. I read American Adulterer earlier this year and liked it enough to buy a cheap copy of the hardback.

I didn’t know Modernism Rediscovered was going to be so bloody big when I ordered it from Amazon. It was only about £13 (and I put part of a voucher toward it as well). It’s an abridged edition of the three-volume set, which costs… £200. Contains lots of lovely photos of California Modernist houses. Red Planets I’m looking forward to reading. I really should read more criticism, and this looks like an interesting set of essays.