Owning books can be more fun than simply reading them. At least that’s what I tell myself when I eye the double-stacked book-shelves and piles of books on the floor of my house. Which is not to say that I plan to keep every one of the books mentioned in these book haul posts. Some of them will go to charity shops once I’ve read them, some of them will go elsewhere. But until I actually start reading more books each month than I buy, the piles are only going to get higher…

New science fiction: Wool I’m reviewing for Interzone. It has come close to being hurled at the wall a couple of times. The Disestablishment of Paradise is a new book by a favourite author, who hasn’t had anything published for a good many years. I should probably have hung on for the UK edition of Rapture, but I do like my trilogies to all match and I already have the Night Shade editions of the first two books. Puck Aleshire’s Abecedary is a small press chapbook I bought on eBay. Helix Wars was sent me by Eric, and In Other Worlds I picked up for £3.99 in a discount bookshop in Wetherby.

These six paperbacks I bought from Cold Tonnage. I may slag off van Vogt a lot, but some of his books transcend their chaotic bonkersness and I find them weirdly appealling. I don’t know if More Than Superhuman, Children of Tomorrow or The Silkie fit that bill. I guess I’ll find out. Colin Kapp is forgotten and under-rated Brit sf author who, like many of his 1960s and 1970s contemporaries, was chiefly published in the US. The Chaos Weapon and The Survival Game are among the last few of his I didn’t own. And Moonstar Odyssey I’ve been looking for a decent copy of for ages, though I can’t remember exactly why…

Some secondhand sf. Pirates of the Universe I’ve been after for a while. The last time I bought a copy, I received a refund instead as the book had apparently suffered a “scissors accident” while the buyer was packing it to send. I know nothing about Endless Voyage, but the new Ace special series from the mid-1970s contains some odd books among its eleven titles. I’ve decided to collect them. 334 is a genre classic which I’ve never read, and The Days of Glory is the first book of Stableford’s Dies Irae trilogy. Both the last were charity shop finds.

Vertigo was a birthday present, but all the rest were charity shop finds. I enjoyed the The Jane Austen Book Club, so I expect I’ll also enjoy The Sweetheart Season. Fowler’s genre work, of course, is excellent. Galatea 2.2 is literary-but-it’s-really-sf novel, which Powers has apparently done a couple of times. Nourishment is  Woodward’s latest; I enjoyed his first, August (see here). I’ve been meaning to try Ronald Frame’s fiction, but it’s taken me a while to find one of his books. And I’ve not checked The Prussian Officer and Other Stories yet, but I suspect I’ve already about half of its contents. But at least that’s half I’ve not read. 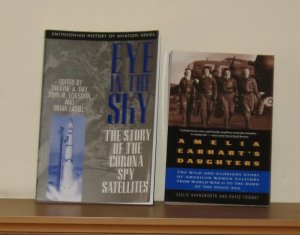 These are research books for the next book of the Apollo Quartet. They might give a clue as to its story. 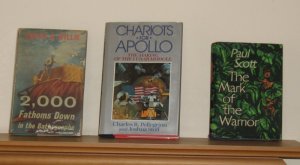 Three books for three collections: The Mark Of The Warrior is a first edition, to go with my other Paul Scott first editions; Chariots for Apollo is for the space books collection; and 2,000 Fathoms Down in the Bathyscape joins my (currently very small) collection of books on bathyscaphes and deep sea exploration.