Yes, I know, Easter is over. And I don’t think they have parades at Easter, anyway. At least not in this country. But it’s still April, and here is a parade of books wot I have recently added to the collection.

This is the third set of novellas from NewCon Press – I didn’t bother with the second set as it was horror – and, as you can see, the covers form a single piece of art. By Jim Burns. I’ve already read The Martian Job (see here), and The Martian Simulacra and The Greatest Story Ever Told (see here), but have yet to read Phosphorus.

Three new-ish science fiction books. Well, A Thorn in the Bush is not really new – it was written decades ago but never published – and it’s not actually science fiction either, as Herbert initially set out to be a writer of thrillers. But never mind. Songs of Leaving was the only book I bought in the dealers’ room at Follycon 2. I’m a big fan of Duchamp’s writing, so I’ve been after a copy of The Waterdancer’s World for a while. 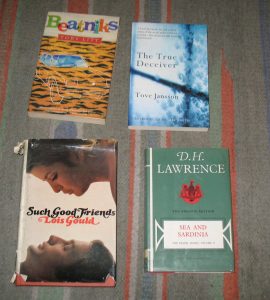 I started reading Litt’s novels several years ago – although not in alphabetical order, as I started with Journey into Space (Litt has titled each of his books alphabetically; he’s currently up to N). I thought I ought to fill in some of the gaps, hence Beatniks. The True Deceiver was a charity shop find. Sea and Sardinia is another for the DH Lawrence Phoenix Edition collection. Such Good Friends was the consequence of drunk eBaying, bought after seeing Preminger’s not very good film adaptation, reading up about it on Wikipedia, and thinking the original novel sounded mildly interesting… 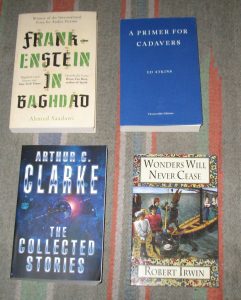 Some birthday presents from last month from my sisters. I’ve heard good things about Frankenstein in Baghdad. A Primer for Cadavers I’ve already read (see here). I’ve always wanted to work my way through Clarke’s short fiction, so I’m glad I now have The Collected Stories. And I’ve been a fan of Irwin’s writing since reading his book on classical Arabic literature years ago, and Wonders Will Never Cease is his latest novel. 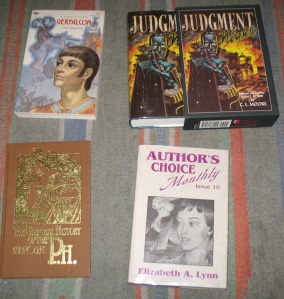 Some collectibles. The Elizabeth A Lynn is actually titled Tales from a Vanished Country, although none of the books in the 29-volume Author’s Choice Monthly series from Pulphouse Publications actually put the titles on the cover. Anyway, I’m slowly completing the set. The Natural History of the P.H. is an essay by Roberts on something that drove his fiction in his later years. It was published by Kerosina. Judgment Night is a facsimile edition of the first edition, published by Red Jacket Press. Gerfalcon, is from the Newcastle Forgotten Fantasy Library, although annoyingly I don’t think it’s the original cover art for the book.