I have been mostly very good of late and have managed not to add more books to the TBR than I read per month, so it is slowly – very slowly – dwindling. This doesn’t however, prevent me from buying better editions of books I’ve already read – because, of course, they don’t count. There have also been a couple of lucky finds in local charity shops since my last book haul post.

The aforementioned charity shop finds: Rites of Passage and The Inheritors I’ve always fancied reading, but had never come across copies before. And the Sword of Honour trilogy was another on my wants list that I’d never expected to find. (Yes, yes, I know; I could have bought the books new from a bookshop, but there are some books you fancy reading but not enough to buy them new.) I stopped reading Gibson after Virtual Light, but I really ought to read him again, so The Peripheral was a fortunate find. Tor double No. 24 Elegy for Angels and Dogs / The Graveyeard Heart was, unlike the others, an eBay purchase. Four more and I’ll have all 36 of the series.

And speaking of series… Now that I have The Submarine Alliance, I only need one more and I’ll have all of the Anatomy of the Ship books (all, that is, of the twentieth century ships; I’ve not bothered with the sailing ship ones). The University of Toronto Press collected all of Malcolm Lowry’s letters in two volumes, under the title Sursum Corda! (it means “lift up your hearts”, but I don’t know – yet – what the Lowry link is). This is volume 1, found on eBay. Both books are pretty scarce, so I’m still trying to track down a copy of the second volume. Science Fiction is an actual new book, bought at whatever price it was the (online) retailer had set. I’m mentioned in it too! It’s only in passing and in reference to SF Mistressworks, but it’s my first appearance in an actual critical work on science fiction in book format. 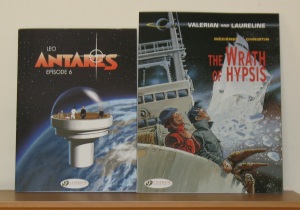 A pair of bandes dessinées from series I’ve been reading: The Wrath of Hypsis is the twelfth volume in the Valerian and Laureline series (there are 23 in print so far in French). Antares Episode 6, however, is the latest volume in both French and English in the Antares series. I wrote about both of these here.

Mention of Delany somewhere recently reminded me that I wanted a copy of Through the Valley of the Nest of Spiders, which I’d negelcted to buy when it was published… and wow, copies are dear now. I eventually found one on eBay for a reasonable price. It’s a surprisingly fat book. A couple of weeks ago, I was chatting on Twitter with Steve Savile about collecting books, and mentioned I had all of Banks’s in first edition (some signed) except his debut, The Wasp Factory, which had always been too expensive. To prove the point, I searched on eBay… and found a copy going for much less than I’d expected (roughly half of what it had been the last time I checked). Reader, I bought it. The Caryatids I reviewed for Interzone – and interviewed Sterling as well – back in 2009, so I only had an ARC. But I always fancied a proper first edition, and when a signed one popped up on eBay for $15, I snapped it up. I also wanted the slipcased edition of Globalhead… and when a copy popped up on eBay for $30, I snapped it up. It’s even shrinkwrapped! Results all round.