This post’s box-set bingeing has been Morden i Sandhamn, a murder-mystery series set in the Stockholm archipelago, mostly in the village of Sandhamn on an island some 60 km due east of central Stockholm. It’s all a bit chocolate box and heavy with the clichés – they even did that one where a person drowns, and the person giving them CPR gives up, and then gets angry and thumps them on the chest… and brings them back to life – but it’s entertaining enough and a good way to improve my Swedish. Also Miss Truth, a Chinese series set in Tang Dynasty Suzhou, about a young woman who is a forensic examiner and helps an assistant minister in the Ministry of Penalties solve puzzling murders, and who also happens to be affianced to an assassin. It’s got it all: sword-fights and kung fu, cleverly worked out solutions to the murders, colourful costumes, a good-looking cast, and good production values. The subtitles can be a little… creative, however. And, finally, Unforgettable, a US series about a cop with hyperthymesia, who uses her photographic memory to solve murders for the NYPD. It’s entertaining enough, and the gimmick is well-used, but the lead character is just a little bit too good to be plausible. And, unfortunately, they introduced a “kooky” computer forensics technician in episode 11 – going for an Abby Sciuto – and she’s really annoying (she also talks complete bollocks).

I did try watching Mutant X as well, but it was fucking terrible, a knock-off X-Men that still managed to feel more like one of those bad straight-to-VHS sf movies from the late 1980s. Best avoided.

X: The Unknown, Leslie Norman (1956, UK). This is one of the films that helped established Hammer Films as a maker of horror and science fiction movies, and it’s pretty much an exemplar of the sf films they made. A platoon of soldiers are training  to use Geiger counters, in case of nuclear war, in a gravel pit of course, when they discover evidence of a radioactive creature beneath the earth. And, er, that’s pretty much the plot. Radioactive blob from underground wreaks havoc. Hammer Films didn’t get complicated – it was one of their strengths. The US lead here is Dean Jagger, because all UK films of course had to have US leads in order to appeal to the parochial US market. X: The Unknown doesn’t do anything a number of similar films, including later Hammer Films, haven’t done, but one of the advantages of the brand was you always knew pretty much what you were getting. Which was mid-twentieth-century British budget horror. And that was actually a good thing. 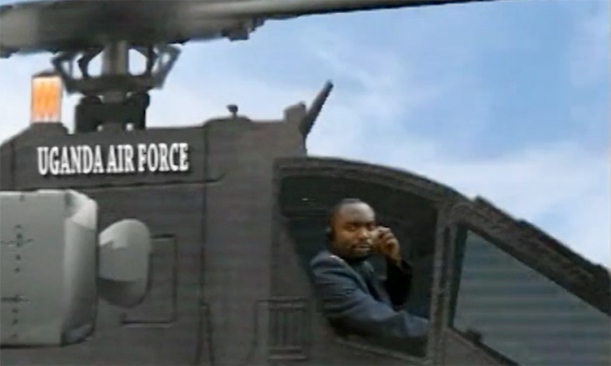 Who Killed Captain Alex?, Nabwana IGG (2010, Uganda). My first Ugandan film. And it was reportedly made on a budget of under $200. Unfortunately, the director – who edited the film, and added the special effects, on his cobbled-together desktop PC – wiped his hard-disk to make room for his second feature film. But then a power surge wiped that, so he had to start over again from scratch. Fortunately, DVD copies of Who Killed Captain Alex? survived. Unfortunately, they were “VJ copies”, apparently a thing in Ugandan cinema – films are accompanied by a “video jockey” or “video joker” voiceover, who comments and jokes about what’s happening on screen. Who Killed Captain Alex? is a pretty ordinary overly-violent and overly-cheap thriller about a clash between local police and the Tiger Mafia. The acting is terrible, the special effects are cheap and obvious, but the fight choreography is surprisingly good. There’s also a good musical interlude. Given the budget, and the complete absence of film-making experience in Wakaliga, a suburb of Kampala, Who Killed Captain Alex? is surprisingly watchable. Nabwana IGG apparently went on to make a couple of other films and I’d actually like to see them.

Where’s that Fire?, Marcel Varnel (1940, UK). Will Hay was a big comedy star in the UK from the 1920s through to the 1940s, and inspired a number of comedians I remember from my childhood years. But until watching Where’s that Fire? I don’t actually recall watching a Will Hay movie. It’s not a lack that’s ever bothered me, and after watching this film I don’t think it’s a lack I should ever be bothered about. Which is not to say it’s a bad film. It’s funny. The slapstick is cleverly done, and some of the set-pieces are hilarious. But it posits a village fire brigade with a horse-drawn appliance at a time – WWII, basically – when everywhere else had motorised decades before – see Humphrey Jennings, for example. It feels likes it’s trying too hard for comic effect. I would have preferred a film that was more of its time and not one that tried to pretend everywhere outside London was two decades behind.

The Court-Martial of Billy Mitchell, Otto Preminger (1955, USA). Yes, that Billy Mitchell. The one who’s referred to as “the father of the US Air Force”. And even had a bomber, the B-25, named after him during WWII. Apparently, he wasn’t so well-regarded initially. After WWI, which the US entered late, as usual, and claimed all the credit, as usual, Mitchell was vocal in his desire for a US air force. Unfortunately, his superiors were not so convinced. They set him a test – to sink a battleship with bombs – and he cheated because their conditions made it impossible for him to succeed. So they demoted him, and he spent years on a letter writing campaign. Mitchell is a fascinating subject. Unfortunately, this is not a fascinating film. Gary Cooper plays Mitchell like a teenager, which is really weird, and Preminger’s direction is unobtrusive at best. I suspect Preminger made it because Mitchell continued to be a controversial figure even in the 1950s, but this is far from his best work. An uninspiring biopic.

The Diamond Mercenaries, Val Guest (1976, Ireland). This is one of those films that seems to have been made strictly as a cash investment, and if it returned anything more than a small a profit I’d be very surprised. A handful of big names can’t disguise the cheapness of the film, or the parochial nature of its story. A group of men plan to rob a profitable diamond mine in South Africa – actually, they plan to smuggle out the diamonds collected by a plant inside the mine. They’re up against security chief Telly Savalas. Peter Fonda, a security guard, is persuaded to infiltrate the robbers, but things are not what they seem. An entertaining thriller, with amusingly low production values, that thirty years ago would have been shown on a Sunday afternoon on some cable channel no one watched. And, er, still would be now.

Airplane!, Jim Abrahams, David Zucker & Jerry Zucker (1980, USA). I probably don’t need to describe the plot of this film. Not that it really has one. I’d seen it before – several times – of course, but before I started recording my film-watching. A lot of it is, surprisingly, still funny. It’s aged a good deal better than I’d have expected. I mean, yes, it’s explicitly a spoof of 1970s disaster movies, and in terms of pastiching those it certainly hits its targets, and it’s still very much a late 1970s/early 1980s film, with all that period’s sensibilities, but it’s light on the sorts of those sensibilities and still entertaining viewing in 2020. Which surprised me. Not a great film, and not one that belongs on the 1001 Movies you Must See Before You Die list, but good fun with a few beers on a weekend night.

Love and Other Cults, Eiji Uchida (2017, Japan). A young Japanese woman is left at a weird religious cult by her mother, but then the leader of the cult is arrested, and she floats from family to family looking for somewhere to belong and for an identity. The film is nominally told from the point of view of a schoolboy, something of an outsider himself, who meets Ai at school, and then bumps into her at various points during her life. Ai’s life goes from cult member to dutiful schoolgirl to school drop-out to Japanese counter-culture and, to be honest, I have no idea what this movie was trying to say. I enjoyed it, but it felt like it was making a point that completely opaque. The director is not a name I know, and his other films are also unknown to me.