Maybe I should make it a New Year’s Resolution or something. I did recently go chasing down my teen years by buying role-playing magazines and supplements from the 1980s that I remembered fondly, which at least are not books… But that’s no solution. And actually a little bit depressing, when you think about it. Anyway, the following book-shaped objects containing many thousands of words landed chez moi during the past month or so.

I’m so shallow I’ll buy anything if you make it look like a set. And get unreasonably enraged when you stop making it a set – like publishers who completely change the cover design of a trilogy when they publish the last book. Argh. I shall be forever grateful to Gollancz for not numbering their relaunched SF Masterworks series. Because if they were numbered, I would have to buy them, even the ones I already have in the old series. OTOH, Gollancz: Alastair Reynolds’s Poseidon’s Children trilogy. Argh. This is perfectly normal behaviour, of course. Anyway, NewCon Press, an excellent small press, have over the last couple of years been publishing quartets of novellas which share a single piece of cover art split across the four books. This is the fourth such quartet, subtitled “Strange Tales” – The Land of Somewhere Safe, Matryoshka, The Lake Boy and Ghost Frequencies – and I’ve enjoyed those I’ve read so far. 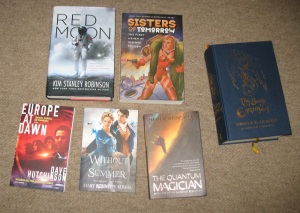 Some recent, and not so recent, genre fiction. Europe at Dawn is the fourth book of the excellent Fractured Europe series. I don’t know if this is the last book. I hope not. Kim Stanley Robinson is an author whose books I buy in hardback; hence, Red Moon. A desire to reread Le Guin’s Earthsea books came over me when I saw The Books of Earthsea advertised, so I got myself a copy. It’s a humongous book, and not a comfortable size to read, but the contents are definitely worth it. Yaszek’s name I already know from Galactic Suburbia, which I read as research for All That Outer Space Allows. Recently, she’s been involved in a couple of projects to signal-boost early sf by women writers, much as SF Mistressworks has done, and Sisters of Tomorrow, an anthology, is one of them. Ignore the copy of Without A Summer, which sneaked its way into the photo. I thought I’d bought it recently, but I actually purchased it about three months ago. The Quantum Magician I have to review for Interzone.

Here we have a couple of bandes dessinées. Distant Worlds Episode 1 is another, er, episode in Léo’s long-running science fiction story which began with Aldebaran (see here). I admit I’m not entirely sure on the chronology of Léo’s series, given there are half a dozen or so separate stories, and no real indication of which follows which. But this one appears to have been written by someone else, Icar, although I still think it’s set in the same universe. Inside Moebius, Part 3 is, er, the third volume of Inside Moebius, containing books 5 and 6 of the original French edition. It’s one for fans of Moebius – and who isn’t one? – and not much use without the two earlier volumes.

I’ve been a fan of Shariann Lewitt’s fiction since finding a copy of her debut novel, Angel at Apogee, in a remainder book shop in Abu Dhabi. I subsequently hunted down copies of her other novels. Initially, she was SN Lewitt (see what I did there?), but with Memento Mori, her fifth novel, she became Shariann Lewitt. I bought a paperback copy back when it was published in 1995, but always fancied upgrading it to a hardback. Sadly, her seventh novel, Rebel Sutra, published in 2000, appears to have been her last. Cherryh is another author I’ve upgraded to hardback– Actually, no, that’s not strictly true. I read a lot of Cherryh during the 1980s, back when she was pretty much ubiquitous on the sf shelves of UK high street book shops. And then in the 1990s, when I was living in the UAE, I started buying her books in hardback as soon as they appeared. But when I returned to the UK, I stopped doing that… And then I discovered eBay, and started picked up hardback copies of her back-catalogue. Some of which were published in signed limited editions by Phantasia Press, like this one: Forty Thousand in Gehenna.

A copy of The History of American Deep Submersible Operations popped up on eBay for kof kof £95. And even though I fancied it, that was too much. But then I discovered that all the other copies I could find were £400+ and, well, then it suddenly turned into a bargain. So I, er, bought it. Owner’s Workshop Manual: NASA Mercury is one of a range of excellent books on spacecraft by Haynes, who have branched out from cars to covering everything from the Death Star to Pies. Yes, honestly. I admire Delany a great deal. He’s probably one of the cleverest writers and critics the genre has produced, and while I probably like the idea of his fiction more than I actually like his fiction – although Dhalgren remains a favourite novel – I suspect I also like the idea of Delany more than I do reading his non-fiction. But I’m determined to give it a go. Hence, In Search of Silence: The Journals of Samuel R. Delany Volume 1 1957 – 1969. Which had sat on my wishlist for over a year before finally shaming me into putting it into my basket. I’ve no idea when volume 2 will appear, or if indeed it ever will (Delany is not very good at producing sequels). And yes, I’ve read The Motion of Light in Water. And I have a copy Times Square Red, Times Square Blue on its way to me…

Some secondhand books. The Lung is not an easy book to find – or, at least, those few copies that can be found are not cheap, especially not for a 1970s paperback. But this one was more reasonably-priced than other copies I’ve seen. And in really good condition. A Trick of the Light, which is Faulks’s first novel, on the other hand… I’ve seen copies on eBay priced between £300 and £400, which is way more than I’d pay for a book I’m not desperate to own. So I was pretty chuffed when I found this copy for £35 from a US-based seller on abebooks.co.uk. Bargain. How to be Both and A Handful of Dust were charity shop finds. (The part of the city where I live, by the way, has around a dozen charity shops. In fact, my local high street is charity shops, discount food shops and cash converters. Welcome to Tory Britain.)

I asked my mother, who is a regular browser in charity shops, to keep an eye open for books by William Golding or Evelyn Waugh. The only Golding she could find was Lord of the Flies, which I already have. But she did find a bunch of Waugh: The Loved One, Vile Bodies, Scoop, Put Out More Flags, Work Suspended and Black Mischief. I should ask her to look for some female writers for me, like Manning, Taylor, Lehman, West, Bowen, Ertz, Frankau and so on.

On my way back from Leeds last week, I caught a black cab home from the station. The route goes along Shalesmoor, a road I’ve travelled along hundreds of times – and walked it many times too on my way from the tram stop to the Shakespeare pub. This time I noticed a new shop, the Kelham Island Bookshop. So the next day I went and checked it out. And found Decline and Fall and When the Going was Good, and The Pyramid and Pincher Martin. The shop has an excellent selection of secondhand books. And they sell vinyl too. I asked how long they’d been open. Since last July I was told. I’ve been along that road I don’t know how many times in the past five months, and never spotted the shop. Shows how observant I am. Sigh. 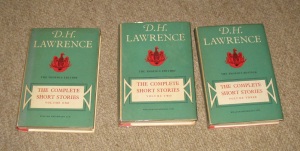 I nearly forgot. Three more of the Heinmann Phoenix Edition DH Lawrence Books: The Complete Short Stories Volume 1, Volume 2 and Volume 3. I already had two of them, but these came as a set and the two I already owned aren’t in as good condition as these. That means I now have twenty-one of, I think, twenty-six books. Why collect these when I have a full set of the white Penguin paperbacks? Well, aside from the fact it’s a set, the Phoenix Edition does include some books not in the white Penguiun editions, and vice versa.