No, not me, but Lawrence Durrell. To celebrate his centenary this year, the Durrell School of Corfu have published a previously-unpublished novel by Durrell, Judith. It was originally written as a vehicle for the 1966 film of the same title, but after being rewritten in 1970 still never saw the light of day. Until now. A limited number of 500 copies have been published. I have one of them. See: 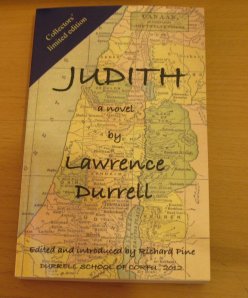