Things must be bad – I’ve not done one of these posts for a couple of months, and yet there only seems to be about a month’s worth of book purchases to document. Of course, this has resulted in a small victory in reducing the TBR, although it’s still somewhat mountainous… I’d actually planned to keep my purchasing at low levels for a couple of months but, of course, as is the way of things, several authors whose books I read all had new works out – August and September seems to be a popular time to release books. Unless you’re Whippleshield Books, that is…

Some new first editions and an old one. Research is Philip Kerr’s latest, and about a James Patterson-like writer who’s framed for the murder of his wife. Let’s hope it’s not a James Patterson-like book… Dark Lightning is the fourth in Varley’s Thunder and Lightning series, following on from Red Thunder, Red Lightning and Rolling Thunder. I initially thought these were YA, but I don’t think they actually are. All Those Vanished Engines is a new novel by a favourite writer, and the first from him since the Princess of Roumania quartet back in 2005 – 2008. I am excited about this book. Finally, Rubicon by Agnar Mykle is one by mother found for me. I looked it up and it sounded interesting so she got it for me. Mykle seems to be Norway’s answer to DH Lawrence – his Sangen om den røde rubin (1956, The Song of the Red Ruby) was confiscated as immoral and obscene. Rubicon is the third book in a loose trilogy begun with The Song of the Red Ruby. If Rubicon is any good, I might track down Mykle’s other works.

Some recent paperback purchases: We Are All Completely Beside Ourselves I bought because Karen Joy Fowler. I’ve been following Kinsey Millhone’s career for a couple of decades and W is for Wasted is the most recent installment. Grafton has kept the series’ internal chronology consistent, which means this one is actually set in 1988. Which sort of makes it historical crime fiction. Milton In America was a charity shop find. And Eric sent me a copy of his latest, a steampunk set in India, Jani and the Greater Game.

Now this is very annoying. I’d been impressed by Léo’s Aldebaran and Betelgeuse series, so I was keen to read Antares. From Wikipedia, I learnt there were five episodes in Antares, so I waited until the final volume was published in English by Cinebook… and then bought all five books. But it ends on a cliff-hanger! Argh. It’s not finished. So now I’m going to have to wait to find out what happens.

The DH Lawrence collection continues to grow. My father had the first two volumes of the Cambridge biography of DH Lawrence – The Early Years 1885-1912 and Triumph to Exile 1912-1922 – and I hung onto them. But I hadn’t realised it was a trilogy, and when I started looking for a copy of the final volume, Dying Game 1922-1930, I discovered that hardback editions were hard to find. But I found one. I also have a couple more 1970s Penguin paperbacks to add to the collection: St Mawr / The Virgin and the Gypsy (a pair of novellas) and England, My England (a collection). I probably have their contents in other books, but I’m trying to build up a set of these particular paperback editions.

Some critical works on women science fiction writers. The Feminine Eye, edited by Tom Staicar, includes essays on Tiptree, Brackett, Moore, Norton, Cherryh and others. Magic Mommas, Trembling Sisters, Puritans and Perverts is a collection of Joanna Russ’s essays on feminism. And The Battle of the Sexes in Science Fiction is a study of, from the back cover blurb, “the role of women and feminism in the development of American science fiction” and I really need to read it for Apollo Quartet 4… 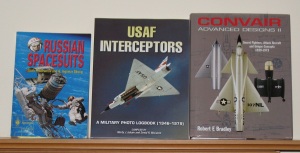 More books for the aviation collection. USAF Interceptors is a collection of black and white photos of, er, interceptor jet aircraft from the Cold War. Not as useful as I’d hoped. Convair Advanced Designs II is the follow-on volume to, um, Convair Advanced Designs, this time focusing on fighters and attack aircraft. And for the space books collection, Russian Spacesuits, which I used for research for my Gagarin on Mars story – and will likely use again at some point.

Finally, more books for the underwater collection. The Greatest Depths by Gardner Soule is a quick and not especially, er, deep study of underwater exploration and exploitation. It covers the main points, including the Trieste’s descent to Challenger Deep and the Ben Franklin’s journey along the Gulf Stream. A Pictorial History of Oceanographic Submersibles does exactly what it says on the cover. It was cheap on eBay (although I demanded, and received, a partial refund because it turned out to be a bit tatty). And The Deep Sea is a glossy coffee-table book containing some nice photos of things at the bottom of the sea.