One rule I always try to follow is to not buy more books each month than I read. That way, the TBR gradually reduces. Unfortunately, I’ve been failing more often than not so far this year – plus one in April, plus three in May, plus two in June… On the other hand, I’m four books ahead of schedule in my Goodreads reading challenge of 140 books in 2018.

Anyway, below are the latest additions to the collection, not all of which will stay on my shelves once read. 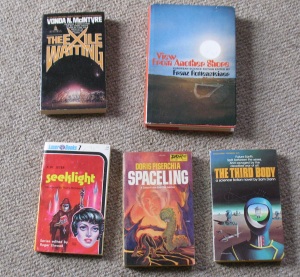 The last couple of years, Swecon has had a better dealers’ room than the Eastercon. In respect to secondhand books, that is. Secondhand book dealers no longer seem to have tables at Eastercons anymore, but the Alvarfonden (and there’s that “the the” again) is always present at Swecon. I am, of course, loath to buy too many books at Swecon, because of carrying them back from Stockholm in my cabin baggage… but half a dozen paperbacks – or in this case: four paperbacks and one hardback – is more than manageable. Spaceling and The Exile Waiting I bought to review for SF Mistressworks, although I’ve enjoyed work I’ve previously read by both authors. The Third Body I purchased after reading the blurb: “The conflict between men and women begun in the nineteenth and twentieth centuries long since had flowered into naked hatred and complete separation. Now both sexes had their own nations, each a passionate enemy of the other. Now sexual pleasure was taboo, and the act of coupling for reproduction was part of a contest for domination, with death to the loser”. Um, yes. I usually pick up Jeter’s novels when I find them, and Seeklight, an early work, is hard to find in good condition and for a reasonable price. This copy was both. The View from Another Shore is a 1973 anthology of non-Anglophone science fiction. I read it way back in the early 1990s, a paperback copy lent by a friend, but when I saw it in the Alvarfonden I thought it worth having a copy of my own. 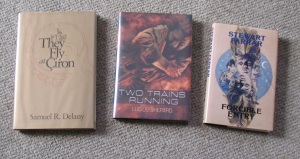 Three for the collectibles. They Fly at Çiron I found on eBay for a good price. Two Trains Running is a not an especially hard book to find, but I wanted a signed copy… and eventually found one on Abebooks. And Forcible Entry I’ve been after for years, but it seems it never made it to paperback and the hardback was published by Robert Hale, the bulk of whose sales were to libraries, making copies of their books really hard to find. (There’s currently a copy of Forcible Entry on Amazon priced at £590!) But a few weeks ago three books by Farrar popped up on eBay from a single seller. I ended up in a bidding war for Forcible Entry, but then discovered a copy had also appeared on Abebooks – from a different seller, obviously – so I bought that one… and the one on eBay went for more than I’d paid for my copy. One of the other Farrar novels looked quite interesting, but I was sniped on that too. Bah. 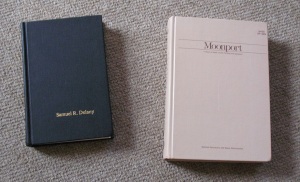 The Delany is The Jewel-Hinged Jaw. I already have this in a tatty paperback, but I couldn’t resist a nice hardback edition. Nasa has been churning out histories of its various programmes for years, and I have several of them – This New Ocean (Mercury), On the Shoulders of Titans (Gemini), Apollo Expeditions to the Moon (Apollo), Living and Working in Space (Skylab), Stages to Saturn (Saturn V) and now Moonport, about the launch facilities at Cape Canaveral. Most of the books are now available as POD paperbacks but, of course, I want the original hardback editions. Some aren’t that difficult to find in hardback, but Moonport is one of the really difficult ones. Previous copies I’ve seen were priced around $400 or $500. This one I bought on eBay for… £25, from a charity shop somewhere on the south coast. Result.

Three collections. I don’t have much time for Kevin J Anderson’s fiction, but under the imprint WordFire Press he has over the last few years published a bunch of stuff by Frank Herbert that was previously unpublished. I’ve no idea what the stories in Unpublished Stories are like, or if any of them are also included in the comprehensive Herbert collection published by Tor four years ago (which I own and have yet to read). Ad Statum Perspicuum by F Paul Wilson and Legacy of Fire by Nina Kiriki Hoffman, volumes 13 and 14 in Pulphouse Publications Author’s Choice Monthly, bring the total I now own up to twenty. Only nine more to go.

Some new releases. It seems Mézières and Christin have allowed someone else to continue their Valerian and Laureline series, and Shingouzlooz Inc is, I hope, the first in a new series. I liked it (see here). Buying Time is a pseudonymous work by Eric Brown, although plans to keep his identity a secret pretty much fell at the first hurdle when the publisher plastered his real name all over the publicity material. I forget why I had Levels: The Host on my wishlist, althuogh I bought it because the price had dropped below £2. I believe it’s a rewritten version of an early nineties sf novel,  republished by a small press, perhaps even Emshwiller’s own imprint. Emshwiller is the son of Ed and Carol Emshwiller, both well-known names in twentieth-century science fiction.

One thought on “Summer bounty”