Christmas comes but once a year, but you can click on the “buy” button or wander into a bookstore on any day of the year…

To start, some Christmas presents. Having been impressed by Charnock’s other novels, especially Dreams Before the Start of Time (see here), I’m looking forward to reading her debut, A Calculated Life. I “discovered” Henry Green only a year or two, but I’m steadily working my way through his oeuvre; Pack My Bag is an autobiography, written because Green didn’t think he’d survive WWII (he did). I bought the first book of the Broken Earth trilogy, The Fifth Season, because it was on offer for £2.00, and thought it quite good; so I bunged The Obelisk Gate on my wish list.

Further additions to some bandes dessinées series I’ve been reading for several years. Volume 20 The Order of the Stones and Volume 21 The Time Opener are actually the end of the Valerian and Laureline series; there’s a volume 22, but it looks more like a B-sides sort of collection. Orbital 7: Implosion is the start of a new two-part story, although it does follow on from Orbital 6: Resistance.

Some recent science fiction. I’ve been a fan of Matthews’s Under Jurisdiction series since reading the first one, An Exchange of Hostages, so I was pleased when they started again recently; Fleet Insurgent is a collection of short stories and novelettes set in the universe. Not every novella tor.com has published has been to my taste – in fact, most of them haven’t been – but Acadie is good solid contemporary sf, with a neat twist; also, the author is a friend and I like his writing. The Smoke is Simon Ings’s last novel, and I’m reviewing it for Interzone.

A selection of first editions. A few years ago I started reading some examples of post-war fiction by British women writers, and I’ve been a fan of the writing of both Olivia Manning and Elizabeth Taylor for several years, but I’ve always wanted to try something beyond the handful of writers I read back then – hence, Devices & Desires by E Arnot Robertson, not to be confused with, er, Devices & Desires by Susan Ertz (see here). Many years ago I read a handful of novels by Philip Boast – they were all very similar, with plots based around secret histories of the UK, chiefly secret religious histories, but I really liked them and fancied reading more by him; The Assassinators is his debut novel and was a lucky, and cheap, find on eBay. Eye Among the Blind was Rob Holdstock’s first novel, and I’ve been intending to pick up a first edition copy for ages… so I was especially happy to find a signed one. The Two of Them I found cheap on eBay from a UK-based seller. 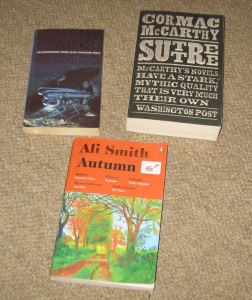 Some charity shop finds. I’ve never read any Ali Smith, although I’ve heard many people speak approvingly of her work; Autumn even looks like it might be genre. I keep an eye open for McCarthy’s novels when I find them, so Suttree was a happy find. And while I can take or leave Clarke, The Ghost from the Grand Banks is about underwater exporation, so it’ll be interesting seeing what Sir Arthur made of it.

I’m not sure how to describe this one. I found it on eBay, from a German seller, and since I’m a fan of James Benning’s films I couldn’t resist it. Although titled (FC) Two Cabins by JB, it seems to include essays on other works by Benning and not just that one. I didn’t pay anywhere near the price currently being asked on Amazon…