As Alfred Hitchcock famously said, “the length of a film should be directly related to the endurance of the human bladder”, but some of the films below stretch that endurance somewhat – happily, not as much Béla Tarr’s Sátántangó… which is 432 minutes long! Of course, these are DVDs and Blu-rays, so there’s always the pause button, a boon to the bladder…. 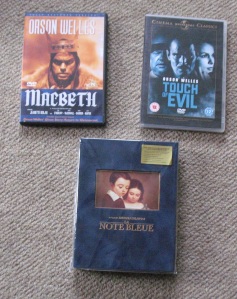 I’ve started to become a bit of an Orson Welles fan, even though I’ve had a DVD of Citizen Kane for a couple of decades… but it’s his other stuff I’m now finding more interesting. Macbeth was cheap on eBay and and Touch of Evil was a charity shop find. La note bleue, on the other hand, is the latest Mondo Vision release of an Andrzej Żuławski film, and I ordered it from their website.

I liked Pakeezah so much (see here), I wanted my own copy. It wasn’t expensive (I see it has now gone up in price). And the rental copy of Mughal-e-Azam I watched (see here) was the original black and white, but I wanted to see it in its colourised version. Which I now have done. And my eyes are still burning. Ran was a charity shop find. I’m not a big Kurosawa fan, so maybe I need to watch some of his films again. 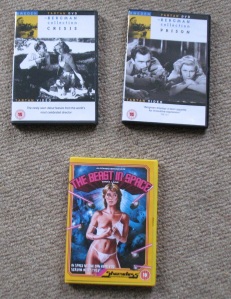 I’ve been trying to complete my Bergman collection – hence, Crisis and Prison. I’m still nine short, although seven of them don’t appear to have ever been released on sell-through… The Beast in Space (see here) was a whim purchase – I’d enjoyed a couple of other Shameless releases, so I chucked this one onto an order.

I pre-ordered the new Metropolis 90th anniversary edition from Eureka’s own website. It arrived recently. The  Loneliness of the Long Distance Runner was a charity shop find. A Brighter Summer Day I bought because it’s on the 1001 Movies You Must See Before You Die list and wasn’t available for rental. I seem to have picked up a few Edward Yang films now. And Oedipus Rex, well, 2017 has been the Year of Pasolini for me…