Not all of the authors whose books I collect in first edition are science fiction or postwar British literature. One or two of them are non-genre and more recent. Like Philip Kerr – who could, I suppose, be classified as a genre author as most of his books have been crime novels featuring the historical twentieth-century detective/policeman, Bernhard Gunther. I’m not sure why I decided to collect Kerr’s novels – there are other authors I read with as much enjoyment and anticipation, but I don’t generally hang onto their books once I’ve read them. Perhaps he was just easier to collect when I started tracking down first editions…

Whatever the reason, here are all of Kerr’s books to date. There’s a new one – a Bernie Gunther novel, of course – due out in March this year: A Man Without Breath. It’s on my wishlist. 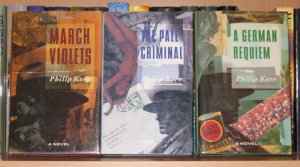 The original Bernie Gunther trilogy, now available as an omnibus edition, Berlin Noir. A German Requiem is signed. (I see on Amazon that first edition copies of A German Requiem start at £120…) 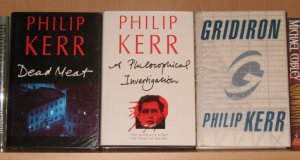 Dead Meat, a police procedural set in the Moscow, was televised in the mid-1990s under the title Gruschko, but I’ve never seen it. It doesn’t appear to have ever been released on DVD. When I first read A Philosophical Investigation, I was extremely suspicious of its philosophical underpinnings, and that was twenty years ago. I should think I’d be even more sceptical now. Gridiron, about a computerised building which starts killing its inhabitants, is probably Kerr’s worst book – yes, it’s such a hoary plot even The X-Files used it. My copy is signed. 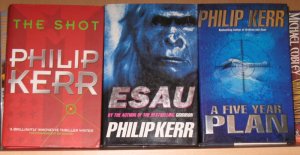 Three more thrillers. None especially stand out. My copy of the The Shot is signed.

The Second Angel is actually a superb science fiction novel, and probably my favourite of all Kerr’s books. Dark Matter is an historical crime novel, with Isaac Newton as the detective. Hitler’s Peace is about the Tehran meeting between Hitler, Stalin, Churchill and Roosevelt. 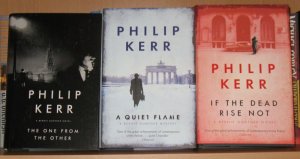 After a decade and a half, Kerr returned to Bernie Gunther, though now covering his activities since the end of World War II. The One From The Other is set in postwar Germany, but then moves to Palestine. In A Quiet Flame, Gunther is in Argentina, involved with the Perons and high-ranking Nazis who escaped capture by the allies. If the Dead Rise Not sees Gunther living in Cuba, with a second narrative set in Berlin in 1935 as the Germans set about building a venue for the 1936 Olympics. 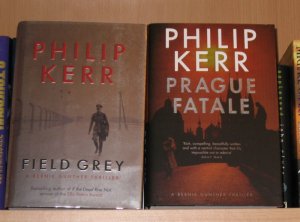 These two I have yet to read. They’re the seventh and eighth Gunther books.

Kerr has also written children’s books under the name PB Kerr – a series of seven Arabian fantasy novels, Children of the Lamp, and a YA novel about a boy who accompanies two chimpanzees to the Moon, One Small Step. I reviewed the latter here.