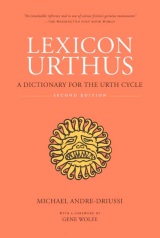 Lexicon Urthus – a compendium and dictionary of words and concepts from Gene Wolfe’s The Book of the New Sun – The Shadow of the Torturer, The Claw of the Conciliator, The Sword of the Lictor, The Citadel of the Autarch, The Urth of the New Sun, and ancillary and additional short fiction and essays. Lexicon Urthus contains definitions/explanations, a note on origin, and often a commentary, on all the unfamiliar words and terms, the characters and places, in the five books, from ABACINATION to ZOETIC.

History: A “lexicon” is “the vocabulary used by or known to an individual” (Wiktionary); “Urthus” is a bogus Latin genitive form derived from “Urth” – which is actually a Norse word, and the name of the eldest of the Norns (see Skuld and Verthandi), and not a corruption of “Earth”.

Commentary: the reputation of The Book of the New Sun rests in part on the word-games – the obscure and obscuring vocabulary – used by Wolfe in telling his story. Hidden beneath and within these unfamiliar terms are additional elements of the story. They also add to the flavour of Wolfe’s world-building. Using invented or unfamiliar terms is not a unique achievement, but Wolfe does not provide a glossary – unlike, say, Frank Herbert in Dune. Lexicon Urthus in part fills that role – it is subtitled “A dictionary for the Urth Cycle” – but it is also much more. Words are not simply glossed, but characters’ names are also explained – their origins and any connection between a historical person bearing that name and the character in the book, and a further commentary on each term. There is also a synopsis of all five books, and several maps of varying usefulness.

Some of the terms glossed are not so obscure:

History: (variant of “muraena”) in early use applied vaguely as the name of a kind of eel mentioned by ancient writers.

Lexicon Urthus‘s usefulness is specific. As is its appeal. It is for those interested in learning more about, and understanding more of, The Book of the New Sun. It is not an analysis of the story – as is, say, Robert Borski’s Solar Labyrinth – but it is a tool to aid in solving the Urth Cycle’s riddles. Its scholarship is impressive – as, one must assume, was Wolfe’s when he wrote The Book of the New Sun. This second edition corrects many of the errors and omissions discovered in the first edition and subsequently published in Errata & Corrigenda chapbooks.