When you look at the Hugo Award fiction category nominees of the last few years, it seems like the same names keep on cropping up. Only an idiot would deny the Hugo nominees are more diverse than they were twenty years ago, but shouldn’t that mean the award now selects from a wider pool of authors? You’d assume so, given the existence of the internet. True, in recent years, the short fiction categories have been dominated by fiction published on tor.com or Clarkesworld; but in the 1980s and 1990s, the short fiction categories were dominated by fiction published in Analog, Asimov’s and F&SF.

Has anything really changed? I decided to have a look. (I was bored last weekend, obviously.)

There’s little point in comparing the representation of gender, race, nationality, etc, of nominees over the decades, as the awards are clearly far more inclusive. I was interested only in the number of writers considered by Hugo Award voters.

big fish in a small pond

In total, over 67 years, 397 authors have been nominated for a Hugo fiction award – on average, five each in novel, novella, novelette and short story. For 1,256 nominations… 397 is a surprisingly low number. It gets even weirder when you look at how many times individual authors have been nominated. Almost half of those 397 have only a single nomination. Among the others…

The most-nominated author is Mike Resnick, with 30 nominations. The top ten looks like this:

The years are first nomination to last nomination. The writers’ careers typically lasted much longer.

That’s a lot of old white men. Interestingly, the only author nominated in all three cohorts is Ursula K Le Guin, who had nominations dating from 1970 to 2003.

Among authors who have been nominated only since the turn of the century, the highest number of nominations is for Charles Stross, who managed 15 nominations in 12 years. Seanan McGuire, who has had 13 in just eight years, will likely end up beating his record.

Digging into the Hugo Award nominations for each year, it was surprising how often authors achieve multiple nominations in the same year. Seanan McGuire managed four in 2013, as did Michael Swanwick in 2003. (John C Wright also had four in 2015, but that was entirely due to Sad Puppy bloc voting.)

In early years, it was even more prevalent, with several authors appearing three times across all the fiction shortlists. John Varley even managed an unbroken six-year run, from 1977 to 1982, of two nominations per year.

The one thing the numbers do show clearly is that authors “have their day”. They will be nominated for half a dozen years on the trot, and then disappear. Some pop up a few years later, but most don’t. In some cases, it’s because their career has ended – either retirement or death – but others continue to be published but are never nominated, perhaps because they’re out of fashion or their fans no longer vote for the Hugo. Everything, as they say, shall pass.

But I set off down this rabbit hole to understand if the size of the pool of writers nominated for the Hugo Awards has changed. Overall, 49% of nominees are “one-hit wonders” (a statistic slightly thrown out by the Sad Puppy campaigns of 2014 and 2015), and 16% have had only two nominations. 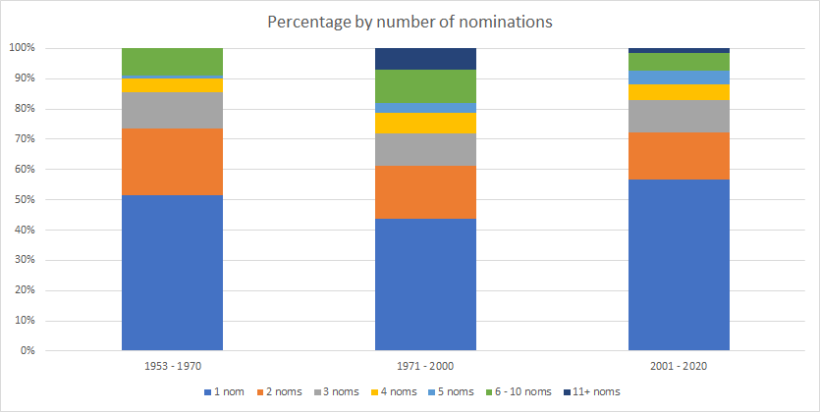 And when you look at the one-hit wonders, it’s clear present-day voters read much wider: from 1953 to 1970, 51% of nominees appeared only once; from 1971 to 2000, 44% of nominees appeared only once; and from 2001 to 2020, fully 57% of nominees appeared only once (without the Sad Puppies, it would probably be a couple of percentage points lower, but still better than earlier cohorts). I had not expected that. The second cohort, 1971 to 2000, also shows more authors being repeatedly nominated. There were indeed some authors very popular among Hugo voters during this period, such as Connie Willis and Ursula Le Guin, but also Silverberg, Resnick, Varley, Niven and Card. (Lois McMaster Bujold’s success stretched across two cohorts, so she doesn’t score so highly here.)

One other question occurred to me. Present day Hugo voters, it seems to me, like debut novels. Certainly, the industry has changed and debut novels are pushed much harder than they used to be, sometimes even more so than new works by established authors. The whole concept of “building a career” has gone, killed by the need for a quick profit. Best-selling series of the past, like the Wheel of Time or Malazan Books of the Fallen, took several volumes to build up to best-seller levels. That wouldn’t happen now. Instead, we get instant best-sellers, like the Kingkiller Chronicles, followed by a decade-long wait for a sequel. If this is meant to be an improvement, it’s hard to understand how.

But, Hugo nominations can at least show – for best novel, specifically – which nominated novels over the years were debut novels. Popular perception – based on changes in the industry – suggest this is a recent phenomenon. So I went through every best novel shortlist, marking off those which were debuts – as in, the first book the author had published, also including collections. It’s a little difficult to be sure for the first cohort, since novels were often serialised in magazines, and it wasn’t always the serialised version that was nominated but a later hardcover/paperback release, and sometimes even both versions – ‘Dune World’, for example, was nominated two years before Dune, which was a joint-winner in 1966.

The results were… interesting.

I’d have expected a few more debuts in this cohort, given the genre was relatively young. But magazines had been serialising novels from the very beginning, so most well-known authors likely had plenty of novel-length works under their belts by 1953.

There’s considerable overlap between the earlier cohort and this one, and it takes a good fifteen years to fade away. (Perhaps I should have defined my cohorts differently – 1953 to 1965, 1966 to 1985, 1986 to 2015, and 2016 to 2020?) Aside from a blip in the early 1980s, debut novels were not that popular, appearing in only seven of the years. Interestingly, one of the two debuts on the 1985 shortlist was Neuromancer by William Gibson; the other was Emergence by David R Palmer, a fix-up of two novellas nominated for the Hugo in previous years. Palmer published one more novel and then vanished.

Again, there’s overlap from the preceding cohort, and it too takes around fifteen years to fade away. But debuts are also clearly more popular, appearing on the shortlists of eleven of the twenty years, and even making up half of the shortlist in 2020. On the other hand, the one debut novel on the 2004 shortlist was Charles Stross’s Singularity Sky – and he was then nominated each year for further five years. The debut novels nominated in 2011, 2012, 2013 and 2014 were by, respectively, NK Jemisin, James SA Corey (technically not a debut as one of the two authors who write under that name had been previously published), Saladin Ahmed (who has published no novels since), and Ann Leckie. At least two novels I’d thought were debuts – by Paolo Bacigalupi and Yoon Ha Lee – proved not to be, as both had published collections earlier.

While recent years have seen several authors nominated multiple times, or for several years on the trot, it’s to a lesser degree than was the case in the decades before the turn of the millennium. So it may seem like the same names keep on appearing, but it was much worse in the past. On the other hand, it’s true debut novels are now more prevalent on the Best Novel shortlist than they were previously. I suspect this is a result of both social media and changes in the industry. Sf fandom has always been tribal – does anyone seriously believe Mike Resnick was the absolute best genre author of the 1990s and 2000s? – although I wouldn’t be surprised if a number of writers in twentieth-century Hugo Award shortlists owed their many nominations to logrolling…

Tribalism still plays a major role, of course, with lists of eligible works posted by influential authors, fans basically providing unpaid marketing for their favourites, and authors branding themselves as personalities separate from their novels (rather than “the death of the author”, it’s privileging the author over the work). But this is the world in which the Hugo Award now operates, and it too will likely change over the next decade or two.

The most popular middle initial for Hugo nominees is apparently “M”.

The author with the most works published before their first Hugo nomination is Kevin J Anderson, with over one hundred novels or collections. A number of authors had published at least twenty books before their first nomination – Jim Butcher, Neil Gaiman, Frederik Pohl, Bob Shaw, Sheri S Tepper, Philip José Farmer, Michael Bishop, Robert Silverberg, Andre Norton and John Brunner.

Only Robert Silverberg has managed more than one novel on the shortlist – two in 1972 (A Time of Changes and The World Inside) and two in 1973 (The Book of Skulls and Dying Inside). He was obviously very popular then. Of course, there was also Blackout and All Clear by Connie Willis, which were published as two books, but the Hugo administrator decided to combine their votes, so giving Willis a win in 2011. As I remember, it was not a popular decision.

Only three people have been nominated for a Hugo posthumously for novel-length works. Both Edgar Rice Burroughs (died 1950) and EE Doc Smith (died 1965) were nominated for Best All-Time Series in 1966. Robert Jordan (died 2007) was, with Brandon Sanderson, nominated for Best Novel for The Wheel of Time series. And no, I can’t remember how they managed to swing that, either.

2 thoughts on “How have the Hugos changed?”