Christmas is over for another year, and life can now return to what passes for normal. Once again, I was in Denmark for the festivities, but this year it was wet and windy rather than the usual deep snow. There was a lot of eating involved, and a lot of walking. The day after Boxing Day, we went to see David Fincher’s The Girl with the Dragon Tattoo at the cinema (English with Danish subtitles, fortunately). Though I’ve not read the book, I have seen the Swedish version of the film. To be honest, I’m not sure which of the two versions is the better.

The flight back from Denmark was… interesting. On the approach to Manchester Airport, the plane was thrown around by turbulence and we almost touched down… before the captain decided to abort and up we went for another go around. Fortunately, the second attempt was much smoother and we landed in one piece. I first flew in 1968 and I’ve flown at least once a year since, and that was the first time I’ve ever been in an aircraft that took more than one attempt to land. Having said that, I’ve never been a big fan of air travel – and less so these days than I used to be. All that “security theatre” is just unnecessary palaver – how many terrorists has it actually caught? We certainly know it failed to catch two bombers… And while airlines seem to want us to believe that air travel has become easier and more convenient, the reverse is actually true. Also, budget airlines appear to hold their customers in complete contempt. They ask you to queue at the boarding-gate for an hour but don’t provide anywhere to sit. Aircraft are not buses – and given all the hoops passengers are forced to jump through before boarding at present, they never will be. The entire industry needs over-hauling.

Santa brought me some books and some DVDs: William Tenn’s Of Men and Monsters and Tariq Ali’s Shadows Of The Pomegranate Tree, the first book of the Islam Quintet; and Twin Peaks: Definitive Gold Box Edition, Fringe Season 3 and Caprica Season 1 Volume 2. I read the two books before returning to the UK. Of Men and Monsters was better than I expected, though I’m in two minds whether it belongs in the SF Masterwork series. Shadows Of The Pomegranate Tree is set in Moorish Spain in 1500 CE, and chronicles the Spanish Catholics’ campaign to wipe out Islam and its practitioners on the peninsula. It’s strong stuff, though Ali’s frequently inelegant prose didn’t do the book any favours. I’ll probably read the rest of the Quintet at some point, but I’m not going to dash out and buy them immediately.

I’ll also read a number of books during the holiday – in fact, I was averaging one a day. The books were Engleby, Sebastian Faulks (2007), which was a definite improvement on the longeur-packed On Green Dolphin Street. A working-class scholar at Oxford University fancies a female student from afar, but one day she disappears and is never found. It’s not difficult to work out what happened to her, though it’s hard to tell if Faulks thought the reveal was an actual plot twist. The final third of the book is a character-study of the narrator, which not only means Engleby is not a murder-mystery novel but also means it’s unsatisfactory as either murder-mystery or literary fiction.

The Manual of Detection, Jedediah Berry (2009), I remember seeing an approving review of in the Guardian by Michael Moorcock when the book was published. As a result, I’ve kept an eye open for a copy in charity shops ever since. It is… an odd beast. The story seems better-suited to a comic or graphic novel and, as a result, doesn’t work all that well as prose. A clerk for the Agency, a huge detective agency which seems to be the most important company in a 1950s-style city, is promoted to detective when the detective whose reports he files disappears. He soon ends up out of his depth in some weird conspiracy between the Agency and a villain based in a carnival, and it’s all to do with the way the Agency actually operates. The missing detective is called Travis S Sivart, but nothing is actually made of the fact that the name is a palindrome. It makes you wonder why the author bothered.

Black Swan Green, David Mitchell (2006), is Mitchell’s fourth novel, and is told entirely in the voice of a thirteen-year-old boy living in the eponymous Worcestershire village in 1982. He’s being bullied at school, his parents’ marriage is on the rocks, and an act of petty revenge leads to a tragedy. Everything in the book struck me as a little clichéd, but perhaps that’s because I remember the early eighties quite well. Mitchell handles his narrator’s voice with skill and it’s a very readable story, but it all felt a bit soap-opera-ish in places. It’s not as successful as Cloud Atlas, though it is better than his first two novels, Ghostwritten and number9dream.

Of course, in the weeks leading up to Christmas the postie was also busy. Since my last book haul post, the following books have landed on the mat:

These are the aforementioned Christmas goodies.

Some first editions: White Eagle Over Serbia is for the Lawrence Durrell collection. The Dragons of Springplace and Impact Parameter I bought in the recent Golden Gryphon 50% off sale.

A few sf paperbacks. I used to correspond with Mike Shupp, and I’ve always wanted to read his Destiny Makers quintet, but it’s taken me a while to find decent copies. Now that I have the first book in the series, With Fate Conspire, I can make a start, although I still need to find a copy of the third book, Soldier of Another Fortune. Eye of Terror is Barrington Bayley’s only Warhammer 40K novel, and by all accounts is especially mad – even for him. The Chessmen of Mars almost completes my set of 1970s NEL editions of the John Carter books – because, of course, I have to have a set that all looks the same, and the ones I already had were NEL paperbacks from the 1970s. City of Pearl is November’s belated read for the reading challenge. I doubt I’ll read it before the end of the year, but never mind.

My father owned quite a large collection of Penguin paperbacks. I found an invoice in one, and discovered that he’d actually ordered them direct from the publisher. This was back in the mid-1960s. Though he read and admired all the Penguin books he bought, for the past few decades his reading had mostly been thrillers. Some of his books I want to read myself so I’ve started bringing them home a few at a time, and so… Le Grand Meaulnes, Alain-Fournier; Hear Us O Lord from Heaven Thy Dwelling Place, a short story collection by Malcolm Lowry; Clock Without Hands, The Member of the Wedding and The Heart is a Lonely Hunter, all by Carson McCullers; Albert Camus’ The Plague; Raymond Chandler’s The Little Sister; and The Sound And The Fury by William Faulkner.

The Revenge for Love and Radon Daughters I found in charity shops. Journey to the Centre of the Earth was a swap from readitswapit.co.uk. With Luck Lasting is Bernard Spencer’s second poetry collection, and while it’s an ex-library book it’s in excellent condition and doesn’t appear to have ever been booked out. 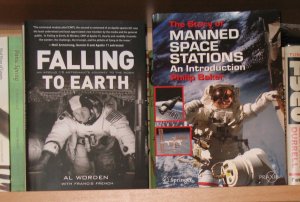 Finally, two books for the space books collection. Falling to Earth is the autobiography of Apollo 15 astronaut Al Worden. It’s signed. The Story of Manned Space Stations was ridiculously cheap on eBay – about £3.50 compared to £18.99 on Amazon.

One thought on “Festive activities”