Well, 2017 was a crap year in reading terms. I managed only 123 books, my worst showing since 2005’s 110 books read. I’d expected 2017 to be lower than the previous year, and had even reduced by Goodreads Reading Challenge target from 150 to 140… And still failed to achieve it. Oh well.

If 2017 failed in terms of quantity, it certainly didn’t for quality. I read a number of excellent books – and was hard-pressed to pick my favourites for the year (see here). I think I’m better at choosing what to read now than I used to be, and it’s not always turning to the same favourite authors. I have them, of course; who doesn’t. And I plan to read all they’ve written… but I also like to read stuff that’s unlike my usual reading material – and I’ve found some new favourites by doing that. 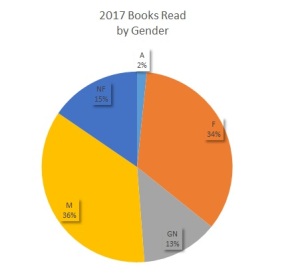 I’ve made an effort in the past few years to balance my reading between male and female writers of fiction. Men just pipped women this year. I suspect that’s because I read a bunch of novellas and I just happen to own more novellas by male writers than female writers. “A”, incidentally, stands for anthologies, “NF” for non-fiction, and “GN” for graphic novels (although, to be honest, they were pretty much all bandes dessinées). 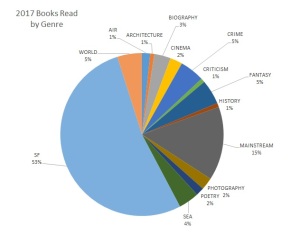 I’ve yet to work out if I’m still a science fiction fan – I mean, I write it, and I still read it, but I have a low opinion of much of the genre’s output. And then I tot up the books read by genre at the end of the year, and it seems science fiction forms almost half of my reading. So I guess I must still be a sf fan. My mainstream reading is down too – even if you add in “world” (which would be translated non-genre fiction), it’s still less than last year’s 27%. Checking back, my sf reading was 40% last year… but I’ve no idea why I read so much more sf in 2017. Was it a good year for science fiction? Not that I read novels as soon as they’re published all that often – sometimes it can take me up to a decade to get around to reading a book I bought when it was first published. I don’t know. There were several sf novellas published in 2017 by writers whose fiction I like. Perhaps that accounts for it. 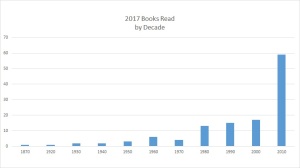 Despite my comment above – and yes, there are books that have sat on my shelves for more than a decade before I finally got around to reading them – it always surprises me to learn the bulk of my reading is from the current decade. I don’t actively seek out the New Shiny – often, I avoid it. So that’s a bit weird. The 1920s and 1930s are probably due to some DH Lawrence I read. The 1870s was, I think, a couple of Jules Verne books. 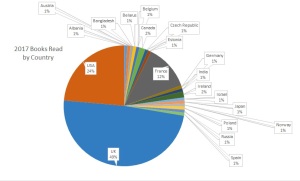 In 2016, I started to track the country of origin of the writers I read, and was surprised how much of my reading is by UK writers. That apparently hasn’t changed – although it has risen from 39% to 49% (and the US has dropped from 35% to 24%). But in 2017, I read further afield – twenty countries compared to seventeen. And some of 2017’s countries were new to me: Albania, Belarus, Bangladesh, Estonia and Norway. Several years ago, I challenged myself to read a book each month from a different country, but I got bogged down in an Orhan Pamuk novel and never finished it. I might have another go at the challenge in 2018.