In 2017, I watched 532 films – well, some were seasons of television series, which, thinking about it, I don’t know why I track as I only do so for those I watched on DVD or Blu-ray. Anyway, I watched 532 “films”, some of them more than once. Some I’d seen before, in previous years. In fact… 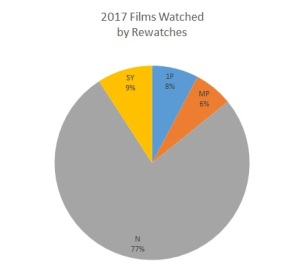 … over three-quarters of what I watched I saw for the first time in 2017. Some of them I rewatched a second, or even third, time during the year (SY). Others I had seen once previously in an earlier year (1P) and some I’d seen several times in previous years (MP).

Nearly half of the films I watched were ones I owned. LoveFilm, which closed at the end of September, was the next biggest source; followed by Cinema Paradiso, another DVD rental service (and the only one left, I think). The only streaming service I have is Amazon Prime, which throws up the occasional good film. I might subscribe to MUBI or Curzon in 2018. I haven’t decided yet. There are a couple of Netflix TV series I’d like to see but I’m not sure if they’re worth paying the subscription. Annoyingly, Amazon are apparently dropping the Youtube app from their service – too much of a competitor for out-of-copyright material, I guess. Monoplistic bastards.

During 2017, I decided to track the gender of the directors of the films I was watching. The film industry is even more of a sausage-fest than book publishing. I made an effort to seek out films by female directors – and even found some I intend to follow, like Claudia Llosa and Lucía Puenzo (both South American) – but I did stick to the sort of films I like, and while women do make them, they’re a small percentage of the total. I hope that changes. In the chart above, “P” means two or more directors, which can be anything from a pair, like the Archers, Powell and Pressburger, to an anthology film by half a dozen directors. And “S” is TV series.

I’m not very good with film genres. I tend to classify most films as “drama”. I’m not convinced there’s a good way to categorise film genres. Okay, so SF, horror, fantasy… those are quite obvious. But what’s the difference between a thriller movie and an action movie? When is a drama a rom com? What the fuck is “action comedy”? I cheated a bit – I’m not sure if the 007 films are thrillers or action films, so I made them their own genre, “Bond”. Chiefly because I bought the complete films box set on Blu-ray on Black Friday. And “Disney” is its own genre, irrespective of whether the films were cartoon or live action. I watched a bunch of Elvis Presely films, so he got his own genre too.

I like to think I watch a wide spread of films, so it always comes as a surprise at the end of the year to discover that the most popular decade among the films I watched was… the current one. Oh well.

In 2017, I made an effort to seek otu films from countries I’d not seen films from before, and managed to add another 14 to the list: Thailand, Kazakhstan, Lithuania, Venezuela, Mongolia, Georgia, Vietnam, Peru, Singapore, Jordan, Jamaica, Estonia, Cuba and Romania. I also managed to keep the US films I watched to around a quarter of my total viewing. As a result of expanding the countries from which I watch films, I’ve become a fan of China’s Sixth Generation directors, and am keen to watch more movies from Cuba, Peru, Chile and the Baltic states. In total, I watched films in 2017 from the countries in the map below.