As a species, we have little experience with naturally hostile environments, a century’s worth perhaps. By “hostile”, I don’t mean environments such as the Arctic, which are uncomfortable, or could prove fatal without basic survival tools. I mean environments which are pretty much instantly lethal without complex technological assistance. Human beings have to date visited two: space (including the lunar surface) and the sea deeper than 200 metres below the surface (it’s actually shallower than that, but the depth record for free diving currently stands at 214 m). 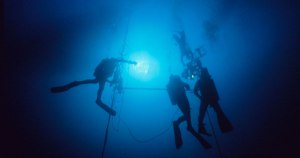 A scene from Luc Besson’s The Big Blue

Science fiction has covered the first of these in countless stories and novels, with varying degrees of accuracy. But no reader of sf doubts the hazardous nature of outer space. While all too many science fictions present magical technology allowing human beings to live and work and make war in space, there’s still a background of ever-present danger. In fact, it’s almost become a cliché.

But what of the opposite extreme? High atmospheric pressure rather than vacuum? Certainly the former have been covered in science fictions, though the genre tends to treat it as much the same as the latter – ie, both are survivable when wearing a spacesuit. But spacesuits are actually just personal spacecraft, designed for the same environment as spacecraft – ie, space. (If that’s not belabouring the point a bit much.) They provide a self-contained atmosphere and protection from radiation. A spacesuit wouldn’t work on a planetary surface with a datum pressure of, say, 50 atmospheres. It would be unwearable, constricted by the gas pressing against every square centimetre, its joints locked since they are designed to maintain a constant internal volume. When submarines get squished when they sink too deep in the sea? That’s what would happen to a spacesuit… and the person inside it. 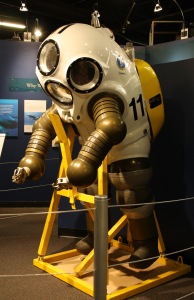 Which doesn’t mean hyperbaric environments would necessarily be out of reach. One solution would be to use an Atmospheric Diving Suit, which is much like a spacesuit but designed to keep pressure out rather than in. The current depth record in an ADS is 610 m (2000 ft), which is 61 atmospheres. Perhaps with the advent of new and stronger materials, or some sort of force-field, environments with much higher pressures would be accessible to someone in an ADS.

The only recent example that comes to mind of a sf novel set (partly) on a world with a hyperbaric environment is Alastair Reynolds’ On the Steel Breeze (2013), the second book of his Poseidon’s Children trilogy. Several chapters take place on the surface of Venus, which, as well as a mean surface temperature of 462° C, has a surface pressure of 92 to 95 atmospheres. In the novel, some of the characters go EVA on the surface, an apparently not uncommon pasttime, in “surface suits”:

The suits were essentially ambulatory tanks. They were glossy white, like lobsters dipped in milk. They had no faceplates, just camera apertures. Instead of hands, they had claws. Their cooling systems were multiply redundant. That was the critical safety measure, Chiku learned in the briefing. Death by pressure was so rare that it had only happened a few times in the entire history of Venus exploration. (p 128)

Clearly – refrigeration aside – Reynolds’ surface suit is much like a beefed-up ADS, and in no way resembles a spacesuit. Which is as it should be.

But what if a closer interaction with the environment is required? Perhaps there’s a need for something more dextrous than “claws”? Or human beings must be as unencumbered as possible in order to live and work in this hyperbaric environment. Obviously not the surface of Venus, but perhaps somewhere less extreme… 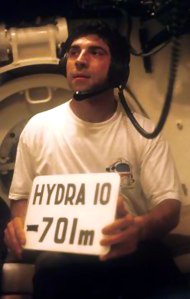 Theo Mavrostomos at a simulated depth of 701 m

You can saturate a human body up to pressures around 70 atmospheres – that’s the current record, set during a simulated saturation dive by Theo Mavrostomos in 1992. He spent two hours at a depth equivalent to 701 metres (2300 feet). The term “saturation” means the person’s tissues have absorbed the maximum possible partial pressure of gas. A sudden return to normal atmospheric pressure would result in explosive decompression. A too-quick return would cause the absorbed gas to bubble out of the person’s tissues – the “bends”, or decompression sickness, which can be fatal. There are other hazards associated with hyperbaric environments. At pressures above 5 atmospheres, nitrogen causes nitrogen narcosis, or “the rapture of the deep”; and at pressures higher than 15 atmospheres High Pressure Nervous Syndrome can affect people breathing helium-oxygen mixtures. 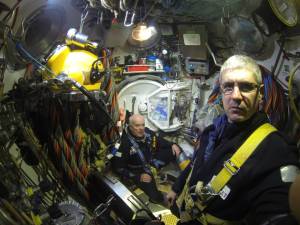 High pressure air is extremely difficult to breathe – not just the physical act of drawing it into the lungs, but also the lungs diffusing it into the blood. By using a less dense gas, such as helium, to maintain the correct partial pressure of oxygen (too much oxygen is poisonous), the human body can handle greater pressures. But this also presents its own set of problems – there’s HPNS, but also helium’s excellent conductivity of heat, not to mention the shortening of sound wavelengths resulting in the infamous “Donald Duck” voice (at the limit of saturation diving, this can make divers pretty much unintelligible). HPNS can be mitigated by adding some nitrogen back into the mix, and “unscramblers” are used on the radio links to divers but these are not wholly effective. There is no solution to helium’s conductivity other than bloody great heaters scattered throughout the saturation system.

At present, we’ve about reached the limit possible with saturation diving. In the oil industry, working at depths of 100 to 250 metres (320 to 820 ft) is routine. Deeper than 450 metres (1500 ft), ROVs are used. Greater pressures than 70 atmospheres may be possible – perhaps by using hydrogen, which has half the atomic weight of helium. Unfortunately, hydrogen is extremely flammable, although some helium could be added to render it safe. French diving company Comex consider it possible to reach depths of 1000 metres (3281 ft), or 100 atmospheres, using a hydrogen mix, but no one has tried and there’s currently no impetus to do so.

A still from Ridley Scott’s Alien

Where this gets interesting is that, as far as I know, no one has used this in science fiction. While hyperbaric environments, or dense atmospheres on high-gravity planets, perhaps even gas giants, have undoubtedly been used, it’s either been with some science-fictional equivalent of a ROV, or magical spacesuits which operate as well in 100 atmospheres as they do in a vacuum, or perhaps even a kind of armoured suit capable of withstanding great pressure like a souped-up ADS. Dense atmospheres seem mostly to appear in science fiction only as settings for winged aliens or humans, such as in Vonda N McIntyre’s ‘Fireflood’ (1979) or Wings’ (1973; see here). Gas giants are quite common in sf, though mostly the action takes place in their upper atmosphere. One that doesn’t is Poul Anderson ‘Call Me Joe’ (1957), in which a disabled operator “drives” a ROV on Jupiter’s surface – James Cameron used a similar idea in Avatar (2009).

But sf typically treats alien worlds – what we now call exoplanets – as either extensions of space, or Earth-like, or near enough Earth-like not to make any difference. Those hardy explorers of countless science fictions often have little more to deal with than inclement weather, although perhaps one or two might need a breathing mask… No one has ever thought of the Earth’s surface as remotely like space – it’s an environment entirely distinct, and although it covers a wide range of conditions they’re all survivable. So why no variety in alien worlds? Ignorance initially, almost certainly; but then it becomes about the story, about some “alien” aspect of the exoplanet which drives the plot, as in Marion Zimmer Bradley’s Endless Voyage (1975; see here). Yet, allegedly, science fiction is about science and technology, and how we use it…

Surely it would be more interesting to explore the techniques and technology that might be used to explore, or perhaps even colonise, an environment that is neither Earth-like nor vacuum? A saturation system strikes me as a perfectly suitable method to use in a hyperbaric environment; and one that is filled with dramatic possibilities. Just think, you could murder someone by knocking them out and them putting them in a balloon’s gondola… Too much science fiction, to my mind, fails to get across the true experience of the strange environments in which it takes place. It’s passed off as “setting” using a few incidental details, but in all other respects treated as if it were, say, middle America, or the Wild West. A more rigorous approach to such things would be far more interesting.

Of course, it’s not just exoplanetary environments. There’s certainly science fiction set underwater at great depth (see my earlier blog post on the topic here), but most such sf imagines that human beings have been physiologically engineered to survive in that environment. But, as far as I’m aware, no one in sf has made the mental leap from deep sea to hyperbaric planetary surface.

4 thoughts on “Science fiction under pressure”