Reading about deep sea exploration, it struck me that the bottom of the ocean is a much scarier place than outer space. Humans cannot survive in either, of course, without technological intervention; but the sea is a more deceptive environment. It should be safe, it nurtured us after all – before birth, and back when life on Earth began. But we can’t breathe H2O, and the pressure can kills us in lots of sneaky and interesting ways long before it’s strong enough to squish us flat. And yet science fiction has treated the difficulties and dangers of the deep ocean with much the same disregard as it has for space.

Getting off a planet is costly and dangerous, and requires the expenditure of a great deal of energy. Sf pretends it has a magic way of doing this, one that mitigates the difficulty and danger. Getting to the bottom of the ocean may be much simpler – you just sink – but it’s equally dangerous. And living down there requires much the same level of assistance and engineering as living in space. Science fiction has its space stations and O’Neill cylinders and hollowed-out asteroids and orbitals, and they allegedly make living in space as mundane as living on this planet. Likewise, the genre posits underwater cities and humans genetically-engineered to live underwater, or submarines capable of reaching fantastical depths. But it’s all glib and unconvincing, just like sf is in its treatment of any place off-Earth. 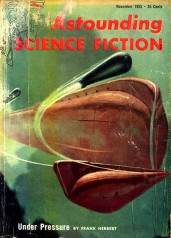 I’ve not read a great deal of watery sf. For some reason, it seems to have passed me by. It’s not been as popular a subject in genre writing as outer space, which may explain how I’ve managed to miss it. I’ve certainly read Twenty Thousand Leagues Under the Sea (1870), whose Nautilus marks one of the first depictions of a submarine in fiction, if not the actual first. At one point in the novel, Nemo stops off at a “submarine forest”, and leads a party including Aronnax to “a narrow valley, between high perpendicular walls, situated about seventy-five fathoms deep”. Or about 450 ft. Which would be about 13.8 atmospheres, and would require compression and decompression – neither of which are mentioned. Another famous science-fictional submarine is the “subtug” in Frank Herbert’s first novel, The Dragon in the Sea (1956, AKA Under Pressure). The story focuses on the mental pressure suffered by the crews of such submarines, as they sneak into enemy territory and pump oil from secret oilfields. The actual physical pressure of the deeps on the submarine itself is mostly ignored. Both The Deep Range (1957) and The Ghost From The Grand Banks (1990) by Arthur C Clarke, neither of which I’ve read, feature submarines. The first is apparently about undersea farming, and the second the raising of the wreck of the Titanic (also the subject of a thriller by Clive Cussler, titled – obviously – Raise the Titanic).

Still in the 1950s, Frederik Pohl and Jack Williamson wrote a trilogy of novels set in and around the underwater city of Marinia: Undersea Quest (1954), Undersea Fleet (1956) and Undersea City (1958). I don’t believe I’ve ever seen copies of these, but from the cover art on Wikipedia they look like juveniles. James Blish and Norman L Knight’s A Torrent of Faces (1967), a novel which proved a better read than I had expected, features a semi-submerged hotel which sinks. Also in the novel are people genetically-engineered to be semi-aquatic, and much of the shallower regions of the oceans are farmed by them to feed the Earth’s tens of billions. A sf novel about which I know nothing is Hal Clement’s Ocean On Top (1973), and I mention it only because the cover art of the UK paperback features what looks like the bathyscaphe Trieste. In Marta Randall’s Islands (1976), the narrator joins an expedition to dive on sunken Hawaii to hunt for artefacts and treasure. The narrative doesn’t go into much detail on the diving. In 2000, Allen Steele swapped outer space for underwater in Oceanspace. According to the blurb on Amazon, it’s set in 2011 and depicts an undersea research station which encounters some sort of sea monster. Harriet Klausner gives it, of course, five stars, but another reviewer complains with a straight face of the characters’ lack of depth. Peter Watts Rifter series – Starfish (1999), Maelstrom(2001), Behemoth: ß-Max (2004) and Behemoth: Seppuku (2005) – is about humans modified to live and work in the deep ocean, but you have to wonder why he named one book after an obsolete videocassette format. Most recently, Carolyn Ives Gilman’s novella Arkfall is set in the world-ocean of a Europa-like moon – see my review on Daughters of Prometheus here.

I mentioned Clive Cussler earlier. His novels often feature submersibles and diving. I’ll admit I’ve not read any of them for over a decade. The first seven or eight were fun thrillers, but their quality began to plummet with the publication of Treasure (1988) and by Shock Wave (1996) they were all but unreadable. These days, Cussler runs a writing sweatshop much like James Patterson. Lincoln Child’s Deep Storm (2007) is a technothriller set in a secret military deep sea habitat, but judging by the plot précis given on Wikipedia, it seems little different to Crichton’s The Andromeda Strain.

For more underwater science fiction, see these two posts on the topic, part one and part two, on Joachim Boaz’s Science Fiction and Other Ruminations.

In the cinema, the topic again seems less popular than outer space. 1989 must have been a good year for underwater epics, however, as it saw the release of The Abyss, Leviathan and Deep Star Six. All three are set in habitats in the bottom of the sea. In The Abyss, it’s an oil rig – and they have a close encounter of the third kind. It’s been praised for its accuracy, but the liquid-breathing diving suit is pure invention. See here for photographs of the abandoned movie set, built in an uncompleted nuclear power plant. In Leviathan, they’re building an undersea missile base – so that would be just like a nuclear ballistic missile submarine then, that doesn’t move – and they stumble across the wreck of a Soviet ship which was apparently carrying a biological weapon. It infects the crew of the habitat, and the film turns into a soggy Alien. In Deep Star Six, they’re mining the ocean floor, and accidentally open a cave that has been sealed for millions of years, so releasing a monster. Which finds its way into the habitat… and the film turns into a soggy Alien.

I’ve yet to buy a copy of The Neptune Factor (1973) on DVD, but from the plot summary on Wikipedia it sounds a bit daft. That may be a real submersible on the poster – DSV-2 Alvin, by the looks of it – and the underwater habitat in which the scientists live and work is called Sealab… But when an earthquake causes Sealab to fall into an oceanic trench, and the DSV is sent to rescue them, it encounters giant monster fish. Voyage to the Bottom of the Sea (1961) is just as silly. Seaview is a state-of-the-art nuclear submarine, with ballistic missiles… and giant windows in the bow. While it is on trials, a meteor shower causes the Van Allen Radiation Belt to catch fire (um, right…), and the Earth has three weeks before everyone dies. The admiral in command of Seaview saves the day by firing a nuclear missile into the Van Allen Belt. 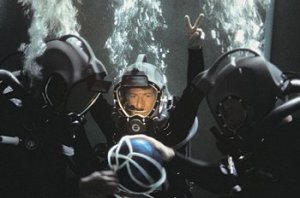 Sphere (1998) has all the ingredients for a good story but somehow manages to be a rubbish film. A giant mysterious craft is discovered deep on the ocean bed (just like that one in the Baltic Sea), and a team of scientists are sent down to investigate. That first shot of the alien craft as the divers approach it is impressive… but it’s all downhill from there. Dark Descent (2002) is set in Challenger Deep. It’s a straight-to-DVD film and stars Dean Cain, which should tell you all you need to know. It’s basically Outland at the bottom of the ocean, with Cain in the Connery role.

Voyage to the Bottom of the Sea spawned a television series which ran for 110 episodes from 1964 to 1968. It’s been shown on British television several times, but I only vaguely remember watching it. The programme also featured a Flying Sub, which appears to have been based on Jacques-Yves Cousteau’s Diving Saucer. I also vaguely remember seeing episodes of Primus, a US series which ran for only a single season in 1971 and 1972. It was about a diver and his various adventures. I must have seen it on Dubai television later that same decade. In the 1990s, there was seaQuest DSV. I only saw the first season in 1993, and fled the country before the second and thirds seasons were broadcast. I left for reasons other than to avoid seaQuest DSV, but missing them was an unintended bonus. I also reviewed the novelisation of the pilot episode for Paperback Inferno, and can remember only that the book was terrible and I filled the review with nautical and marine puns (as you do). More recently, in 2010, the BBC broadcast The Deep, a serial of five episodes starring Minnie Driver and James Nesbitt. Bits of it were interesting, but much of it was rubbish. Nuclear reactors, for example, do not explode. 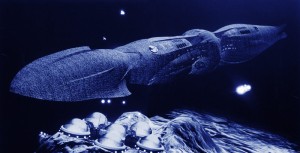 I’ve probably missed out loads of genre books, films or television series which were, if only partly, set underwater. There are, of course, lots of films about naval submarines – from Das Boot to The Hunt For Red October – and no doubt far more technothrillers which feature submersibles or divers than those written by Clive Cussler… but it’s not a genre I read. I’m tempted to try some of them but, while you don’t read technothrillers for the prose, I do hope they’re a good deal better than the crap Cussler’s sweatshop churns out these days…

7 thoughts on “Warm below the storm, part 2”