Brain Thief is Jablokov’s first novel after a ten-year hiatus. When a pop singer or rock star disappears for a decade, they’re retrenching, or “charging their creative batteries”, and there’s an expectation their new material will be a significant improvement over their last. When a writer – especially a genre writer – vanishes for ten years, it’s usually because real life has intervened. And so it was with Alexander Jablokov, whose previous novel, Deepdrive, was published in 1998. Jablokov has made no secret of that fact that he stopped writing novels “to raise a family and make a living”.

If there’s a fear attached to the return to writing of novelists after a lengthy period, it’s that they’ve failed to keep progress with their chosen genre and their new book reads like one that could have been written before they dropped from sight. Admittedly, Jablokov had shown a wide facility within the genre, from knowing interplanetary adventure to cyberpunk to new space opera. Happily, Brain Thief is very much a late noughties sf novel and – if this doesn’t sound too much like jacket copy – is almost the novel Bruce Sterling might have written if he hadn’t written The Caryatids.

While there are clear likenesses to Sterling’s fiction, Jablokov does not spin off ideas with the same frequency or outrageousness. Nor does he need to – Brain Thief is, after all, not a science fictional novel, but a mystery novel told in science fiction mode. Initially, this collision of modes makes for an annoying read – in science fiction, there is a world to be laid out before the reader; in a mystery novel, much has to be withheld. So while Jablokov happily explains the world of his story, he’s less open about the plot which drives it.

Bernal Haydon-Rumi is personal assistant to Muriel Inglis, a wealthy widow who finances oddball projects. One of these projects is Hesketh, an AI-controlled interplanetary probe under development by lone researcher Madeline Ungaro. On his return from a business trip, Bernal discovers that both Muriel and Hesketh have disappeared. And their disappearances are linked. He finds himself following a trail of clues – some generated by Muriel herself, some discovered on his own. Both disappearances, of course, have a single solution – not only the nature of the Artificial Intelligence which drives Hesketh, but also the one thread which binds all the characters into a single narrative.

Brain Thief is populated with a well-drawn, entertaining cast of characters. Bernal himself might be a tabula rasa, as is required by the story, but the rest might well populate an oddball comedy-drama set somewhere in one the USA’s more oddball corners. This is not a criticism – Brain Thief‘s characters are one of its strengths. Another is its writing. Its biggest strength is perhaps the fact that it isn’t trying to be a science fiction novel and a mystery novel. The sf permeates the mystery story, it’s not continually fighting it for dominance. Which means the resolution satisifies because it doesn’t need to do more than resolve the story. Jablokov has judged his plot, and integrated his world, to a nicety.

I wouldn’t surprised to see Brain Thief on a few shortlists in 2011.

(Yet more evidence that sf awards are completely out of touch, irrelevant and no longer serve a useful purpose – Brain Thief, an excellent novel, appeared on only the Locus SF Novel list (as 16th of 18 titles). The big winner in 2011 was the bloated monstrosity that is Connie Willis’ Blackout/All Clear. Why bother, eh?)

It’s been over a month since my last book haul post, but if I leave it any longer, it’ll take me an entire weekend to photograph my purchases. So herewith approximately five to six weeks worth of slippery “bid”, “buy it now” and “place order” buttons, and the results thereof. 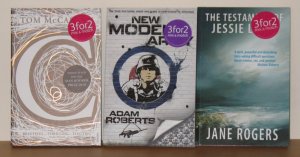 Some time this month, we say goodbye to Waterstone’s 3-for-2 offer, so I felt obliged to go out and have one last go on it. C I’m told is very, very good; I haven’t quite found the right way to read Adam Roberts yet, but I’m reliably informed New Model Army is very good; and The Testament of Jessie Lamb is a literary-but-it’s-really-sf novel and was on this year’s Booker long list.

A trio for the SF Mistressworks collection: The Planet Dweller, We Who Are About To…, and How To Suppress Women’s Writing.

Some charity shop finds. I went off McEwan after Saturday, but I might as well give Solar a go. Engleby is the only Faulks I’ve not got, but I really need to get cracking on reading them. Out of Sheer Rage is about DH Lawrence – sort of – and I’ve heard it’s good. The HE Bates boxed set was a surprise find. It contains: Fair Stood the Wind for France, Dulcima, Seven by Five, The Four Beauties, The Wild Cherry Tree and The Triple Echo.

Some science fiction, which I do of course still read every now and again. Three SF Masterworks: Greybeard and The Body Snatchers I’ve never read; Hellstrom’s Hive I’m looking forward to rereading. Debris I have to review for Interzone. A Fighting Man of Mars… well, I’m looking forward to the film due out later this year – I may even go to see it at the cinema. The books I’m less keen on, but never mind.

First editions: Final Days and Leviathan Wakes are both science fiction (much thanks to Gary for the former, and Sharon for the latter). Isles of the Forsaken is fantasy – and yes, that’s the signed, numbered edition. Dark Tangos is, well, it’s by Lewis Shiner. And it’s also the signed edition.

First editions for the collection. Yes, that really is Demons by John Shirley and, er, Demons by John Shirley. The one with the red cover is a novella from Cemetery Dance, and the other is a novel, of which the novella forms the first half. Both are signed. As is Brain Thief, which I reviewed for Interzone last year (but was only sent an ARC). The Player of Games is hard to find for a reasonable price in first edition, but I managed it. 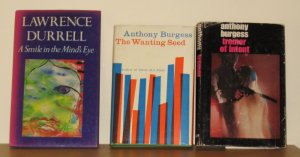 A Smile in the Mind’s Eye is signed and goes on the shelves dedicated to Lawrence Durrell and his works. The Wanting Seed and Tremor of Intent are difficult to find in first edition. 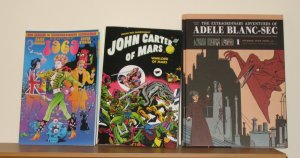 Graphic novels: the latest in The League of Extraordinary Gentlemen, the fab and groovy Century 1969. I have fond memories of Marvel’s John Carter of Mars comic from the 1970s, and a few years ago tracked down all 28 issues and three “king size” annuals. But a trade paperback is so much more convenient – except the artwork in it is black and white, and not colour as in the original comics. The Extraordinary Adventures of Adéle Blank-Sec 1 I bought after enjoying Tardi’s The Arctic Marauder. 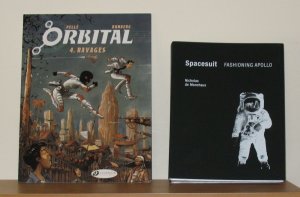 Finally, Ravages, the last, I think, of the Orbital graphic novels, and a book about, er spacesuits titled Spacesuit: Fashioning Apollo. I don’t know what the cover of the latter is made from but it has a similar texture to rubber matting and is quite strange.