Do I really need to say who, what book and the specifics of his argument?

Naturally, he was roundly condemned by science fiction writers, critics and readers – some more than others – but, just as naturally, their condemnation was as damaging and misguided as said literary author’s misguided, but likely entirely self-serving, remarks had been.

As genre fans, we’ve been there before, perhaps too often to count:

The literary author who uses a science fiction trope but claims it is not science fiction:
I don’t have a problem with this. I don’t even think of them as “tourists”, as some do. They’re approaching genre tropes from an entirely different direction, they don’t have the history, they don’t have the context; and, sometimes, that’s exactly what the trope needs to shine new light on it, to view it from a fresh perspective.

The literary author who uses a science fiction trope but claims it is entirely their own invention:
This one is pretty much indefensible. Who these days would write a story without bothering to research it? “Hey, I’ve just written a novel about artificial people and no one else has ever done that before” is just so lacking in self-awareness, it makes its utterer a perfectly legitimate target of every critic and pundit in existence. 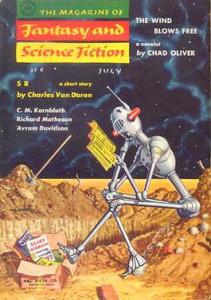 It could be argued any such complaints about either of the above points are invalid unless the critic has read the book in question. Which is bollocks. It’s not the work itself being criticised, it’s the trope’s origin or history, as given by the literary author, that’s under discussion. And you don’t need to read through 100,000 words of jewel-like, or whatever, prose to know that.

I actually like it when literary authors make use of genre tropes in their fiction. They have a tendency to deconstruct the trope because they’re not invested in its history and prior usage. Sometimes, that manifests as “re-inventing the wheel”, but even so they frequently bring a new approach to something that has probably been deployed uncritically in genre circles for decades. And most genre tropes need a critical re-appraisal. All those fucking robots… I mean, it’s the twenty-first century and we’re still writing uncritically about a metaphor for slavery?

Which neatly brings us back to the not-so-cunningly disguised novel which kicked off this blog post. I freely admit I’ve not read Ian McEwan’s Machines Like Us, and have no plans to do so. I gave up on his fiction after 2005’s Saturday, although I did mistakenly read Solar (2010) some years later. I probably should have given up on his fiction back in 1997 or 1998. I don’t need to read Machines Like Us. There’s been an extensive publicity machine promoting the book. Because McEwan is a writer who gets that treatment, whether or not his books deserve it. A cynic might even suggest the whole “I’ve done AI better than the entire corpus of science fiction” thing is just part of the marketing strategy.

I have also read other genre works by literary authors who claimed not to write genre, or were reluctant to accept the label when called out on it, and I admire their books: Lawrence Durrell’s Tunc and Nunquam, John Fowles’s A Maggot, Jed Mercurio’s Ascent, Jenny Erpenbeck’s The End of Days, Kate Atkinson’s Life After Life, Katie Ward’s Girl Reading, David Mitchell’s The Bone Clocks… But then it’s not like I need to reel off titles as there are no end of highly-regarded novels which make use of genre tropes but are never identified with the genre.

As I said, I don’t have a problem with that.

It’s nice when they give the nod to genre – as Michael Chabon has done, as Margaret Atwood eventually did, as Doris Lessing has done, as Michel Faber has done… There are some blindingly good genre works available from those four names alone, none of which were published as genre. Genre is not a private club, it just has some members who are a little more… invested in it than others, and they can be somewhat over-protective.

But then the publicity machine for Machines Like Us comes along, and it’s like we’re back in the 1950s or 1960s. It’s like genre is still a ghetto of its own making, but this time it’s someone outside who’s shoring up the walls. It feels like a step backwards because it is a step backwards. Genre writers are forever handicapped by being seen as genre writers.

But literary fiction is just a genre, I hear you cry. Except, well, it’s not. No one really sees it as that. True, it often doesn’t sell as well as actual genre fiction – science fiction and fantasy. It has the prestige genre fiction lacks (and any claims that genre fiction doesn’t need that prestige are just reverse snobbery), and occasionally there’s a break-out literary fiction novel which knocks an author up a level, like McEwan’s Atonement, not that advocates of literary fiction would use anything as crass as units sold as a metric of quality…

There is genre fiction, there is category genre fiction, there is fiction written within the tradition that is genre. There is also fiction that might look like any one of those three, but has only a passing knowledge of them. That neither invalidates it nor makes it inferior. It is what is in the fiction which defines it. But it is also the ur-text which defines it. And ur-text has as much loyalty to genre as any individual trope does.

Having been so in the past does not make it so now or in the future. Which is a horribly vague way of saying that some tropes have actually been handled better by non-genre writers. Alternate history is an excellent example. Jenny Erpenbeck’s The End of Days is a superior example. But even populist novels, such as Len Deighton’s SS-GB, often seem more exemplary of the sub-genre than alternate history novels published as category science fiction.

We should be applauding how genre tropes are used, not where they are used. Had McEwan written something truly groundbreaking with Machines Like Us, then yes, fold it into the genre conversation. It seems he hasn’t, so that’s pretty much academic. But when the genre can co-opt, for example, The Underground Railroad, and even include it on genre award shortlists, what’s the problem with the genre conversation incorporating non-category genre works?

Fault them for their quality, as you would a genre work. Not for their choice to use genre tropes.