I’ve already posted my best for for the first six months of 2017 (well, obviously, not really six months – more like, “up to June”), and you can find it here. But what I usually do is also is work out what I’ve been reading and watching in terms of gender, genre and nationality.

books
Since 1 January, I’ve read forty-nine books, which is down on previous years. In fact, I’m running aroundna dozen books behind on reading challenge this year, and I set my target at 140 books despite managing 150 books last year. 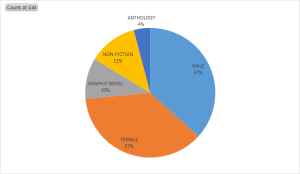 In terms of gender, I’ve done quite well, as male and female authors are running neck-and-neck. I’ve not always alternated, which is what I try to do, but if I read a run of books by male authors, then I follow it with a run of female authors. I only track this for fiction, incidentally.

Genre-wise, I self-identify as a science fiction fan, but in recent years I’ve found myself reading less sf… Or so I thought. As you can see from the chart above, science fiction has accounted for 59% of my reading in 2017 so far, and mainstream only 13% (although if you add in the world fiction, a new category, it rises to 19% – and yes, I dislike the term “world cinema” but I wanted to track the books I’d read my non-Anglophone writers and “world fiction” seemed the easiest way to do it). 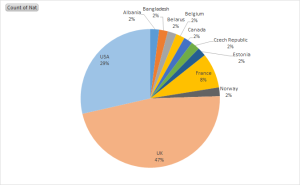 And speaking of “world fiction”, this year I’ve been tracking the nation of origin of the authors whose books I read. I’d imagined that since I read a lot of sf, most of my reading would compromise US authors, but it seems I actually read more UK sf than US. Quite a bit more, in fact. I’ve also made an effort this year to read fiction from other countries – hence the presence of Albania, Belarus, and Estonia. The Norwegian book was one I’d had my shelves for several years, the Bangladeshi one was the novel from which a favourite film was adapted, the Czech was an author whose books I like and have read previously, and the French ones are all bandes dessinées. 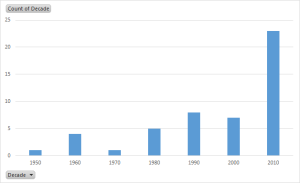 Finally, the decades in which the books I’ve read were published… I never think of myself as someone who always go for the new shiny, so it came as a surprise to see how much books of the last seven years dominate my reading. The 1990s was the decade in which I first became active in sf, so perhaps that accounts for its high showing.

films
I started recording the films I watched back in 2001, although I didn’t bother tracking rewatches of films I’d already seen until a year or two later. And it wasn’t until 2010 that I began noting down the country of origin of the movies. In the last few years, I’ve made an effort to watch more films from non-Anglophone countries – or, at the very least, to reduce the percentage of films I watch that are from the US. 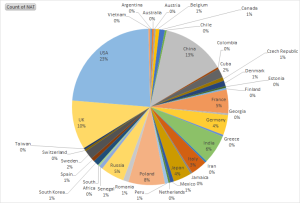 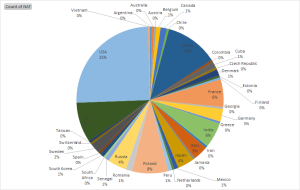 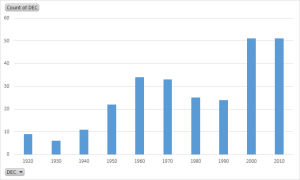 I also prefer to spread my viewing across the decades, and not just watch the latest films. But then, I do like me some 1950s cinema… although this year I seem to have watched more 1960s movies. And it’s weird that both the current decade and the last decade score exactly the same at 51 films each. 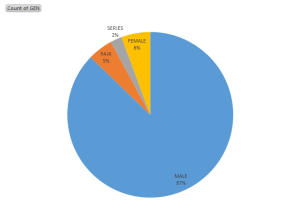 This year, I’ve also started tracking the gender of the directors of the films I watch. I know that most of the films I watch are made by men, but I was a little dismayed at how low the percentage of women director was, even though this year I’ve discovered some new female directors whose oeuvres I’d like to explore, such as Claudia Llosa and Lucía Puenzo. (Incidentally, “pair” means two or more directors, and “series” means television programmes.) Discounting rewatches and other films by the same director, I’ve actually watched films by 176 directors, but only a dozen of them were women. I need to improve that. 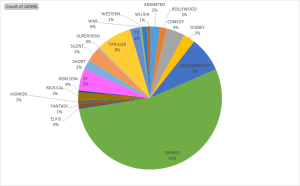 The genre of the films I watch: I tend to think of most films as “drama”, which is why that category is so big. And “animated” includes anime films, but not Disney ones, which, for some reason I decided to split out into a category of its own. Also, “wu xia” is a bit of a cheat, as not all of the films I classified as that are actually fantasy – some were big Chinese historial epic films. Oh, and I watched a few Elvis movies, so I felt he deserved his own genre too. But only 5% of the movies I’ve watched so far in 2017 were science fiction films… but then I’ve never been that big a fan of sf cinema, although I do rate a handful of sf films pretty highly.

Finally, I’ve been working my way through the 1001 Movies You Must See Before You Die list (the 2013 edition) for a couple of years, and so far in 2017, I’ve watched twenty-six films new to me from that list. The results have been… mixed. Some were good, some were merely okay, but none turned me into a fan of the director, as has happened in previous years. To date, I’ve watched 867 films on the list (some of them before I even started recording my film-watching), so that’s 33 to go… I’m unlikely to complete the list this year – I may never complete it, as some of the films are near-impossible to find. But we’ll see.