I’ve been using the 1001 Movies You Must See Before You Die list (2013 edition) to direct my film-viewing for a couple of years now, and I thought it might be worth having a look at how it’s been going… Before starting to use the list, I’d watched some 407 of the movies. My total is currently standing at 823 films seen, so I’ve watched slightly more as a result of following the list than I had before I even knew of it. What I find especially interesting, however, is the number of films I’ve subsequently bought on DVD or Blu-ray after watching them on rental only because they were on the list. Of course, there were films – by, for instance, Hitchcock, Tarkovsky, Kieślowski, Kubrick, the Archers – I already owned as I’ve been a fan of their work for many years… 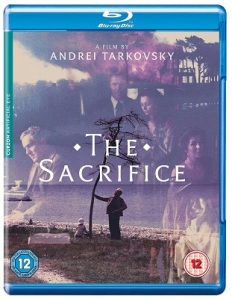 After watching Lola and Les Demoiselles de Rochefort, I bought a Jaques Demy collection, which also included The Umbrellas of Cherbourg. On the other hand, much as I enjoyed Les vacances de M Hulot, it wasn’t until I’d seen Playtime, and loved it, that I decided to invest in a collection of Jacques Tati’s films. Carl Theodor Dreyer is another such director – I’d seen Ordet, I forget why I rented it, but not been especially taken with it; but after watching Gertrud I purchased everything by Dreyer currently available on DVD – which was, fortunately, pretty much his entire oeuvre (thank you, BFI). He became a favourite director. After buying a copy of James Benning’s Deseret – because it was on the list but wasn’t available for rental – I became a huge fan of his work, and bought every other DVD of his films released by Österechisches Filmmuseum. I am eagerly awaiting more being released. It also turned me into a fan of video installations, as I discovered recently when I visited the Hafnarhús branch of the Reykjavik Art Museum and saw Richard Mosse’s ‘The Enclave’ (I did like Örn Alexander Amundáson’s ‘A New Work’ too, although it’s not video, because it reminded me of my own approach to writing fiction).

There were also a number of movies I watched on rental because they were on 1001 Movies You Must See Before You Die list, and then promptly bought copies of my own, like Le mépris, The Adventures of Robin Hood, 2 or 3 Things I Know About Her, F for Fake, Shane, Spring in a Small Town, Shock Corridor, Häxan and Lucía. I liked Cocteau’s Orphée so much, I tracked down a copy of the Criterion collection which included it, The Blood of a Poet and Testament of Orpheus (not to be confused with the Studiocanal box set, which only has the latter two films in it). I loved Glauber Rocha’s Earth Entranced so much, I bought it, Black God White Devil and Antonio das Mortes, the only films by Rocha available on DVD in the UK. And since the I couldn’t rent the third part of Godfrey Reggio’s Qatsi trilogy, Naqoyqatsi, I bought the trilogy – although I still think the first film, Koyaanisqatsi, is easily the best.

There are also a number of films I’ve added to my wishlist because I might at some point buy them… or I might not. Such as Henry V, The Hired Hand, Easy Rider, Man with a Movie Camera, The Great Silence, Babette’s Feast… not to mention further films by directors who appear on the list… which is why I have picked up films by Guru Dutt,  Yasujiro Ozu, Ken Loach and Satyajit Ray…

There are also a number of films I only got to watch because I bought a DVD copy of my own – they just weren’t available for rental. Not all have been especially good. Stella Dallas is on the list, but is not available for rental, or indeed for purchase on DVD, in the UK. I ended up buying Spanish release… and the film proved to be entirely forgettable. There’s also streaming TV these days, and I found a few, surprisingly, streamed for free on Amazon Prime – like The Gospel According to St Matthew and Salt of the Earth. However, Amazon Prime has not been an especially good source of films from the list – either free, as previously mentioned, or for “rental”, such as Sergeant York and Housekeeping, both of which cost me £3.49 for 48 hours.

One very real consequence of using the 1001 Movies you Must See Before You Die list has been that my film collection has become much more varied. Not only have I bought films previously unknown to me by Brazilian directors (Glauber Rocha and Nelson Pereira dos Santos), Cuban directors (Humberto Solás), Indian directors (Ritwik Ghatak, Guru Dutt), but I’ve also been encouraged to further explore the oeuvres of directors I had previously tried, such as Yasujiro Ozu, Federico Fellini or Jean-Luc Godard… and have since bought films by all three.

I don’t think the 1001 Movies you Must See Before You Die list is perfect. Far from it. It includes way too many US films, and some nations’ cinemas are almost totally ignored. Albania, for example, apparently has a thriving film industry but, to be fair, I can’t find any films from the country readily available on DVD with English subtitles. And yet Greenland, with almost no film industry to speak of… there are DVDs of Greenlandic films with multiple-language subtitles, like Nuummioq, which is very good.

Having said that using the list has resulted in me owning a much more varied collection of films – most of the Hollywood blockbusters went to local charity shops, and I no longer buy them – it has also shown me that some particular cinemas, not just present-day Hollywood, don’t work for me. I’m not especially taken with French films, although I like some of them a great deal. Godard, mentioned earlier, is a good example – some of his films I like a lot, some of them I just can’t understand the appeal. I like the movies of Renoir and Vigo, but not Bresson or Carné or Malle or Chabron. And Buñuel I find a bit hit and miss.

When it comes to movie genres… Well, there are remarkably few classic sf films. Given the number of sf films produced since the beginning of cinema – and one of the earliest classics, La voyage dans le lune, is an actual sf movie based on an actual sf novel – the genre’s hit-rate has been pretty low. There are a lot of westerns on 1001 Movies you Must See Before You Die list, and I will admit that I don’t see the appeal of the genre. It’s a peculiarly American mythology, I get that, but too many of the westerns on the list seemed ordinary, and it was only the ones which broke the mould, or bent the formula, like The Hired Hand, which for me stood out. Speaking of US films, there are a number of movies by American indie directors also on the list, and those too I failed to see why they should make the list.

Part of the problem, of course, has to do with whether a film can be considered seminal or germinal in some way. It’s evident enough with a silent movie. Watch Dziga Vertov’s Man with a Movie Camera, and you can’t help but understand how historically important it is. And some silent movies, which normally I’d never bother to seek out, and I’ve seen solely because they’re on the 1001 Movies You Must See Before You Die list, they’ve proven to be excellent entertainment – not just Storm Over Asia from Russia, but even early Hollywood works like The Phantom of the Opera.

The 1001 Movies you Must See Before You Die list is a deeply-flawed list, but it has still enriched my film-watching. I don’t agree with many of the choices made for the list, but it has at least prompted me to watch those films. And then seek out other films similar to those I liked. My DVD collection is, I like to think, much more diverse as a result. I’ve still some way to go before I complete the list – in fact, some of the movies are so hard to find I may never get to see everything on it. And, of course, the list is updated each year, although I’m more likely to have seen recent additions. But there is still the cinematic traditions of a huge number of nations, USA not included, to explore…