I’ve been working my way through Figures of Paradox, a study of Aleksandr Sokurov’s films by Jeremi Szaniakawski, and at one point he references the Kantian sublime, “the feeling that is so great it inspires neither love nor hate”, and it struck me that science fiction, in its own small way, is forever striving for that moment of the sublime. It’s not an actual objective of the genre, just something its readers look for in the texts they read. But they call it “sense of wonder” (please let’s not use “sensawunda”, which sounds like a brand of margarine). However, sense of wonder isn’t the same as the sublime. It’s a small version of it, the B-movie version – more colourful certainly, lots of bright primary colours in fact, but less actually awe-inspiring.

I think that difference in intensity may be simply a lack of physicality. Mountains are, famously, there. But the sublime doesn’t require an actual physicality. When NASA published the photographs of the surface of Vesta back in 2011, the asteroid was 188 million kilometres from Earth – and no one in my lifetime will ever visit the asteroid in person – but the fact of Vestia’s existence, its realness, the knowledge that it shares this universe with us, still prompted a moment of the sublime. 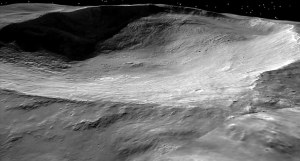 And against that, all science fiction can do is… manipulation of scale. When Stephen Baxter casually drops a billion-year history into the plot of his novel, when Alastair Reynolds writes of a journey across the width of a galaxy in his story, when Ann Leckie mentions in passing that the Radchh live in a Dyson Sphere… Because the story is focused on individuals, the sudden realisation – carefully stage-managed by the author, of course – that the story encompasses so much more, at a scale so much greater than the merely human, evokes sense of wonder. Admittedly, suspension of disbelief relies on a degree of plausibility. The universe is fifteen billion years old – that’s not only plausible, it’s a scientific fact. But a Dyson Sphere is not, on the face of it, an especially plausible idea… but it was proposed in scientific literature, and has since become part of science fiction to such an extent its plausibility no longer seems relevant: it has a form of virtual plausibility.

Of course, not all science fiction makes use of sense of wonder. Not every science fiction story takes place over billions of years or across millions of planets. On the contrary, some forms of science fiction deliberately downplay the sense of scale in order to suggest a more homogenous setting for the story – such as space opera. I mean, seriously, no one thinks there are zillions of human-habitable worlds out there just waiting to be settled, or that there’s a Kuhnian Paradigm Shift waiting somewhere in history’s wings to turn reduce the distance between these worlds to journeys of hours, days or weeks instead of centuries and millennia. But then it’s not like space operas are intended to be plausible in any way. They’re just adventure stories, and they use a language all their own.

In a mode of fiction which offers “idea” on one axis and “sense of wonder” on the other, there will always be works which score low, or even zero, on one axis. And too, the popularity of regions of such a graph will shift with time and fashion. We’ve had New Space Opera and we’re now living through the tail-end of it. Space opera has returned to its roots; the space operas being published today are no different in sensibilities to those of the 1970s (although the style of prose may well have changed). One sub-genre which seems to be flowering at present is military sf. Just look at the thousands of self-published titles available on Kindle. And as subgenres of science fiction go, mil sf is probably the least sophisticated. It is war stories told in the language of science fiction. It relies on an insultingly simplified worldview; it is the pulp sf of our times.

I gave this post the title “La petite mort de sf” not because I think science fiction is dead. (Again…) I used the expression “la petite mort” because of its meanings – including “fainting fit”, “nervous spasm”, or, more recently, “post-orgasmic unconsciousness”. While I’m not suggesting science fiction – good or bad – should inspire such states, it seemed like a good fit for an analogy of the gap between sense of wonder and the Kantian sublime. Paul Kincaid once wrote a critical work titled What it is We Do When We Read Science Fiction – and a very good critical works it is too – but I wonder if a more important question is: What It is We Want When We Read Science Fiction. And what I find interesting is the tools built into the genre which address those wants; and a) how those tools have come into being, and b) how the tools are deployed to generate specific effects. For “tool”, you might as well read “trope”… although I think of tropes as the manifestation of deep-seated ideas, sort of like how three-dimensional figures appear in two-dimensional space…

Like manipulation of scale, sf is also open to manipulation of affect. The cheapest way to do this is through language – choosing the right words, essentially. This is not something unique to sf, by any means. Nor is it a technique used all that much in the genre. For much of science fiction’s history, prose has been seen as merely the transmission vector for story. Some sf writers have declared prose should be “beige” or “transparent”, the idea being it should not be a barrier to understanding the story or plot. But, quite frankly, if any style of prose is such a barrier then it’s not doing its job. This doesn’t mean the reader shouldn’t have work for it. Prose can do many things – it can declare, describe, imply, suggest, evoke, generate trains of thought only peripherally linked to the text being read… It can create pictures in your brain, moving pictures, stories which not only re-enact those written on the page but go further, outside the story, beyond the story…

Which means prose carries a heavy burden, over and above that of story. Personally, I prize clarity; but I also prize detail. Perhaps even an over-abundance of detail. Prose should not be “transparent” or “beige”, it should evoke as much as it possibly can, using all the tools at its disposal, linguistic and genre. And there are a great number of tools at the sf writer’s disposal – not just the manipulation of scale or the manipulation of affect mentioned earlier in this post.

True, science fiction will never reach the sublime, but no form of literature will. In its use of sense of wonder, it can approximate it (in a peculiarly circumscribed way, that is). Unfortunately, it is also chiefly a commercial genre of fiction, and much of its DNA was drawn from pulp fiction. The genre as it exists today prizes story and plot and all the mechanical things which together form beginning, middle and end; and yet it has the potential to be so much more. Sometimes, it hints at that promise – and it’s not necessarily genre authors who manage to do so…

Science fiction is a broad church. It has room for two-fisted tales of interstellar derring-do just as much as it does for lyrically-written cautionary tales or avant garde explorations of inner space. And in some years, one form of science fiction will be more popular, and win more awards, than another form. Like the alleged variation in lengths of skirts during times of economic hardship and boom, so science fiction cuts its cloth to the world around it. Unlike skirts, however, it doesn’t appear to go up when times are bad, but the reverse. When times are good, sf is typically optimistic; when the future is not so rosy, dystopia and mil sf rule the roost. It is a barometer of our times.

But it still has a long way to go before it gets close to the sublime.