In 2015, I decided to try and watch as many films as I could on the 1001 Movies You Must See Before You Die list, started subscribing to a second DVD rental library, and bought myself an Amazon Fire TV Stick. As a result, I watched 571 films during the year, of which 115 were rewatches (some more than once). In among those were 170 from the aforementioned list.

The bulk of the movies I watched were DVDs or Blu-rays I’d purchased myself. (I bought a multi-region Blu-ray player so I could watch Region A Blu-rays.) But I also watched quite a number from Amazon’s Lovefilm by Post. See below.

In terms of genre, drama seems to have done especially well, although admittedly it’s a broad term and perhaps some of the films I’ve categorised as drama might better be labelled something else. Anyway, see below. 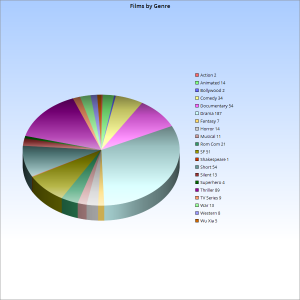 The two Bollywood films were from the 1001 Movies You Must See Before You Die list – or rather, one of them was: the other, Deewaar, proved to be a 2004 film of that title and not the 1975 one on the list (although both starred Amitabh Bachchan). Although last year I rented several of the plays from the BBC’s Shakespeare Collection from the late 1970s/early 1980s, the one Shakespeare movie this year was Laurence Olivier’s Henry V, which I thought very good.

By decade, the films I watched pretty much follows the same graph for books read: the current decade is the most popular (surprisingly), and there’s a steady increase through the decades which peaks at the 1960s. See below. 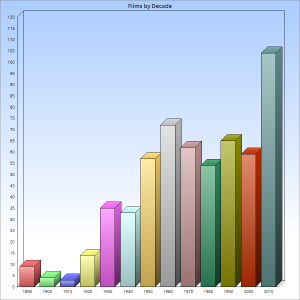 The late nineteenth-century/early twentieth-century were a result of watching some early Dreyer silent movies and a DVD collection, Early Cinema – Primitives and Pioneers, because one of the films on it was on the 1001 Movies You Must See Before You Die list.

By nation makes for an interesting graph. Although I’ve been working my way through the 1001 Movies You Must See Before You Die list, which includes movies from many different nations (but over half are from the US, sadly), I’ve been a fan of world cinema for years and many of my favourite directors work in non-Anglophone cinema. See below. 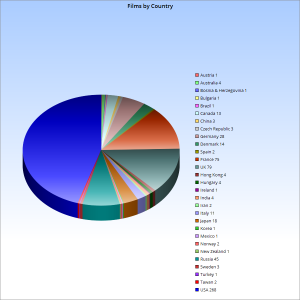 The high number from Russia is no doubt due mostly to Aleksandr Sokurov, a favourite director; for Denmark because of Carl Theodor Dreyer, and for Germany it’s probably Rainer Werner Fassbinder. Only two from Sweden – I obviously need to watch more Bergman…

Speaking of favourite directors, Sokurov comes out top for 2015 with 33 (most, it has to be said, were rewatches). Second is Jacques Tati, a 2015 “discovery”, at 15, then James Benning, another 2015 “discovery”, at 13. The remaining top ten goes as follows: Rainer Werner Fassbinder (12), Alfred Hitchcock (11), Carl Theodor Dreyer (10), Lars von Trier (8), Sergei Eisenstein (6), and lastly George Stevens, Michael Curtiz, Leni Riefenstahl, Jean-Luc Goddard and Jean Cocteau (5).

I finished the year having seen 703 movies on the 1001 Movies You Must See Before You Die list, and a quite large pile of DVDs and Blu-rays on my To Be Watched list. I plan to keep on with the list in 2015, although I think I’ll take it a bit slower, perhaps spend some evenings each week reading rather than film-watching. Plus, it’s getting to the stage now where I have to purchase titles in order to watch them as they’re not available for rental. We’ll see how it goes.