I’m probably the last person who should be giving writing advice, which is as good a reason as any for a blog post on the topic. If you want to know how to write short stories which are guaranteed to sell, look elsewhere. I suspect no one else really knows either, they’re just not honest enough to admit it. “Hey, it worked for me – sure it’ll work for you!” Yeah right. If you’re looking for rules on writing readable saleable fiction, I’m the wrong person to ask. If that makes me a dilettante, then so be it. I’m interested in fiction, I’m interested in how fiction works, and I’m interested in using that knowledge to create fiction which does something different. At least, that is, within my chosen genre.

It often seems wannabe writers can’t make a move without bumping into some “rule” or other: “show, don’t tell”, “prose must be transparent to let the story shine through”, “there are only seven plots”, “use a three-act structure”… They’re all bollocks. Fiction, least of all science fiction, is not a programming language. It doesn’t need to be compiled, and it won’t break the reader if, for example, you chose not to use quotation marks around dialogue.

And no one knows why some fiction succeeds and some doesn’t. It is not true that good novels will always see print (never mind sell by the boatload). There are a lot of excellent novels that have never been published, there are a lot of bad novels that have seen print (and some have even been phenomenally successful). There are also a lot of hugely popular novels which garnered a raft of rejections before someone eventually took a chance on them.

As for posterity… Dickens was a hack, an unashamedly populist writer – he even let his readers choose how one novel ended. And Jane Austen was allegedly neither the best writer of her generation nor the most popular – but her novels have endured, while the others are forgotten. Mary Shelly wrote seven novels, but it is her debut, Frankenstein, which is remembered two hundred years later by most people.

Science fiction should be willing to stretch the boundaries of narrative and genre. That it usually doesn’t is a result of the fact it is, at heart, a form of pulp fiction. It had its beginnings in pulp magazines, and though it has at times tried to throw off its origins – the New Wave being the most celebrated attempt – the basic form usually ends up prevailing. And not necessarily for the right reasons. 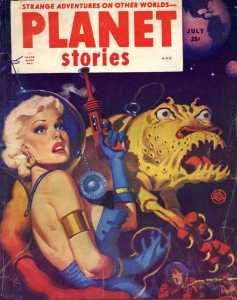 It’s a long-accepted truism science fiction readers are more open-minded, more willing to accept the Other, than readers of other genres… Or are they? Has sf become a victim of its own success? Its most prevalent models have proven so popular across most media that all forms of science fiction are assumed to be of that type. It’s an easy argument to believe – the Sad Puppies certainly fell for it – but it’s not in the slightest bit true. Science fiction is a broad church, and it’s long been my contention that those who take the trouble to admire, and understand, how the genre operates will make better use of the tools available to a writer.

So it’s all very well just blithely introducing FTL into a science fiction text, because the story requires several different locations and the genre insists they be separated by light-years. Except… Firefly put all its worlds in a single planetary system. Not, it has to be said, a particularly plausible solution, but at least it was an attempt to address a common sf stumbling block: space is big, hugely mind-bogglingly big. There are remarkably few science fiction novels which take account of that – notable examples being the current fad (see below) for generation starship stories, such as Aurora and Children of Time.

But if Whedon failed to interrogate the tropes he deployed – no real surprise there – there’s no reason why other writers cannot. There is no GREAT BIG BOOK OF TROPES which must be obeyed. There are no rules which dictate how tropes should be deployed. No matter what some people might insist. Making use of them the same way everyone else has done is just lazy writing, cheap shorthand for complex objects (as is hiding those tropes under a thin veneer of metaphor – but that’s a rant for another time). Each trope certainly exists for a reason, and it makes for much more interesting fiction, to me, if it is the reason that’s interrogated.

The big point about writing, the thing that drives all others, is that you get out what you put in. But your readers probably won’t. There are tricks you can use to trigger a specific reader response, but sooner or later your readers will spot those tricks and they will no longer work. So you might as well write something which meets your own objectives and not those of some mythical reader. The market does not exist, it’s an emergent phenomenon – so it’s no good writing “to the market” because there’s no such thing. And should you decide to try – well, by the time you’ve written your novel, the fad is likely over, unless you’re uncannily good at trendspotting. You can only write to please yourself and hope it pleases others…

It’s not like I’m one to talk. The Apollo Quartet has sold in total some 3000 copies over 3.5 years, of which just over half were sales of Adrift on the Sea of Rains. I was surprised during a conversation at Fantasycon 2015 to be told the Apollo Quartet is held in high regard. It often feels like “regard” should have a number attached and I know – from tracking my own sales – what that number is for the Apollo Quartet. Certainly among my friends and acquaintances, the four books have their fans. But not every review of them has been complimentary or fulsome.

I wrote each book of the Apollo Quartet to deliberately not be what readers of the preceding book had praised. People liked that Adrift on the Sea of Rains was literary, so I wrote The Eye With Which The Universe Beholds Itself to be a science fiction puzzle narrative. With each book I tried to push the boundaries of narrative and narrative structure. I made a number of artistic decisions which readers have questioned – not just the lack of quotation marks, but also the lack of closure, the refusal to spell out acronyms, the use of inference to link two narratives… the choice by myself to make the reader work to understand the story. I didn’t intend the Apollo Quartet to be light reading, and that dictated how I approached writing it.

There is, now I think about it, another reason why I’m a poor choice of person to write about writing science fiction: I can’t stick to the point, and I’m not entirely sure if this piece is in any way helpful. Writing advice is a poisoned chalice at the best of times – success is too individual for any particular technique to be held up as a general guideline. (I’m assuming a basic facility with language, of course). Having said that, one piece of advice I can give: get yourself a sympathetic group of beta readers. They will tell you what works and what doesn’t. Don’t just bang your novel up on Kindle, unseen by anyone else. (And don’t get me started on self-published 99p science fiction novels – that’s a rant for another day.)

There’s an unspoken compact between writer and reader. You can either stick to it… or have a bit of fun with it. Personally, I think the latter makes for more interesting fiction. Unfortunately, the former is more likely to result in successful fiction. You pays your money and you takes your choice…

One thought on “On writing and how to”