The second book of An Age of Discord, my space opera trilogy is now available as an ebook. It’s titled A Conflict of Orders, and follows directly on from A Prospect of War. It can be purchased from Amazon UK and Amazon US (and all the other Amazons too, of course), or the signed limited hardback can be pre-ordered here from Tickety Boo Press’s website. The hardback will be published on 30 October, but you get to download a free book edition in a file format of your choice while you’re waiting for it to appear.

The blurb for A Conflict of Orders goes like this:

Casimir Ormuz and the Admiral, at the head of the biggest fleet the Empire has seen since its founding, are on their way to Geneza to meet the forces of the Serpent.

On Shuto, capital world of the Empire, the Serpent has begun his siege of the Imperial Palace.

Ormuz and the Admiral must win their battle on Geneza, and then travel to Shuto to save the Emperor, to save the Empire. But winning the fight and lifting the siege are only the beginning. Still complicating matters is the millennia-long conspiracy which seems to be driving the Serpent’s rebellion.

So who is the real villain?

And when it all ends, who will be sitting on the Imperial Throne? 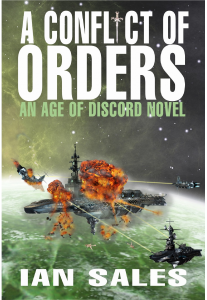 We went for a green theme for the cover of this book – each of the three will be distinguished by colour – and included a sword in the title to make clear that this space opera is not military sf, nor indeed your usual type of space opera.

The third book, A Want of Reason, is going to take a while longer to appear. Publication is scheduled for March 2016, but if I can get it all done and dusted early enough then it might be a little before then – but not by that much, I suspect. Hopefully it will be worth the wait.