I have actually been very good this year. So far, at least. The TBR has been decreasing. Sadly, this is not not because I’m reading more – unfortunately, I seem to be actually reading less. But I have been buying fewer books. And I’ve also given away loads of unread books – that I was never going to get around to reading – at the BFS/BSFA York pub meets and SFSF Socials.

Having said all that, I can’t not buy books for an entire year. Especially when there are ones by authors whose works I like that are being published, or when books I’ve been looking for pop up on eBay for a reasonable price, or when there are sets to be completed.

But at least I’m starting to take control of the collection. I think.

Some fantasy. Which I don’t read all that much, but never mind. Breed and The Red Knight I won in the raffle at the York pub meet last weekend. Which was cool as Karen was one of the authors giving a reading. (Usually, I never win anything decent in raffles.) The Glittering Plain is the first book in Newcastle Forgotten Fantasy Library series, which looks like it might make a good series to collect. And Beautiful Blood is Lucius Shepard’s last book for Subterranean Press. It’s a novel set in the world of the Dragon Griaule.

Some science fiction. I found a dozen or so of the Tor doubles in a remaindered book shop in Abu Dhabi when I lived there, and I’ve been picking up others in the series whenever I find them, such as The Longest Voyage / Slow Lightning. They published 36 books in total, and most of them aren’t that good. Meh. The Carhullan Army I bought in Oxfam while in York for the aforementioned pub meet. Dark Orbit I’m reviewing for Interzone. I’m a fan of Gilman’s fiction, but I’m still trying to figure out what I think to this one.

Some mainstream. About Love and Other Stories and Five Plays I bought late one night after a bit too much wine and having watched Aleksandr Sokurov’s Stone, which is apparently about Chekhov. These things happen. I read Farrell’s The Siege Of Krishnapur a couple of years ago and was much impressed, so I keep an eye open in charity shops for his books. A Girl in the Head I bought in the aforementioned Oxfam shop. Bit of a dodgy cover, though. The Rainbow is one for the DH Lawrence collection. My mother found me this copy. I now have eighteen Lawrence paperbacks with that particular cover design. 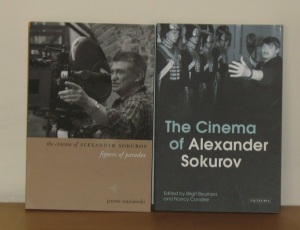 And speaking of Sokurov… The Cinema of Alexander Sokurov and The Cinema of Alexander Sokurov: Figures of Paradox are the only two books on the director I can find. Annoyingly, both discuss both The Lonely Voice of Man, Days of Eclipse and Taurus, three films which have never been released on DVD with English subtitles. Otherwise, very interesting books on a fascinating director.