So I went to see Christopher Nolan’s Interstellar, which some have been saying is the best sf film ever made. But, of course, they always say that about a new film, probably because they’re just shills for the Hollywood marketing machine. But if you wait a bit – or a week, as I did – then a few more honest voices begin to appear… And they gave mixed reviews. Thing is, just because Hollywood decides to have a go at near-future sf, just as they had a go at a space movie last year, there’s no need to scream about how good it is… Having said that, I’ve now seen the trailer for the Wachowskis’ Jupiter Ascending twice and it looks proper awful.

But Interstellar. It is supposed to be a rigorous and accurate vision of interstellar space travel – handwavy vastly superior aliens who create the wormhole notwithstanding. Matthew McConaughey plays NASA test pilot turned farmer Coop, since a global famine has resulted in anything remotely scientific being shut down. As one person puts it, “We’re a caretaker generation, we don’t need engineers, we need farmers”. Except the farming on display is some sort of pastiche of early twentieth century farming, with a small wooden house in the middle of a sea of maize. There are no equipment sheds, no garages, no silos, no storage. Just a house. And even though various events in the film take place at different times of the year, the maize is always just about ready to be harvested – in fact, it is being harvested by robot combine harvesters on a number of different occasions. Makes you wonder why there’s a famine if they can grow maize so quickly 365 days a year…

A “ghost” in the bedroom of Coop’s ten-year-old daughter, Murphy, causes books to fly off the shelf, but Murph works out there is a pattern to it. It proves to be binary, a set of coordinates. Murph, incidentally, was named for Murphy’s Law, “What can happen, will happen”. Except that’s wrong – Murphy’s Law, as popularised by John Paul Stapp, is “anything that can go wrong, will go wrong”. This is not the only little “joke” in Interstellar. At a parent-teacher meeting, Coop is told the Apollo missions were faked in order to bankrupt the USSR, which they did successfully. No mention of the arms race. Or the fact the Apollo missions ended twenty years before the USSR economy crashed. Or that by the second decade of the twenty-first century, the Russian space programme was the only one flying human-rated spacecraft.

Anyway, the coordinates lead Coop and Murph to a secret NASA facility, where kindly professor Brand, Michael Caine, helpfully explains the whole plot. I should note that it’s taken an hour to get to this point – Interstellar is a film in which very little happens for the first third. Thirty years earlier, NASA discovered a wormhole near Saturn, which leads to twelve habitable worlds in another galaxy. Ten years ago, they sent a crew of twelve to explore three of those worlds. Now they want to send a supply mission. And Coop just happens to have test-piloted the spacecraft they’re readying for the mission. So even though he has literally just walked in out of the fields, he’s the best man for the job. Murph doesn’t want him to go, because she thinks he won’t come back. Coop, of course, hates farming and immediately signs up. Also on the mission is Brand’s daughter, played by Anne Hathaway, and two spear carriers, Wes Bentley and David Gyasi. Oh, and a pair of AI robots that look like tourist information kiosks. 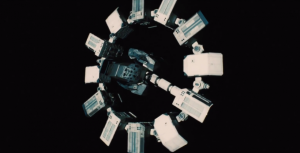 The spacecraft launches, rendezvouses with the Endurance, NASA’s last remaining interplanetary spacecraft, which has been parked in orbit. The crew go into hibernation for the two-year trip to Saturn – in a room which is apparently tiled like a bathroom, something I’d have thought too expensive weight-wise for a spacecraft. The shuttle craft too was unfeasibly large – not to mention a strange and not very aerodynamic shape. At Saturn, the crew wake up, the Endurance enters the wormhole (cue demonstration of how a wormhole works with a folded piece of paper; sigh). On the other side, they discover a planetary system orbiting a supermassive black hole, with three habitable worlds. The previous mission sent teams to all three of these planets. One world orbits inside the event horizon of the black hole, so that time dilation means seven years will pass for every hour spent on its surface. Which is just… WTF. Any such planet would have long been swallowed by the black hole, and radiation would fry everything on it anyway. The planet proves to be completely covered in about half a metre of water, and the previous mission did not survive an encounter with a giant wave – and, in fact, Coop’s mission only just makes it out alive. But they do stay far too long on the planet, and when they return to the Endurance, twenty-three years have passed. The chief effect of this, of course, has been to estrange Coop even more from his daughter… who is now Brand Sr’s protegé and helping him to complete the equations which will marry the theory of relativity with quantum mechanics and somehow or other lift a giant concrete spacestation built on the ground into orbit.

Since water planet was a bust, and it took so long for them to learn this, the Endurance only has enough fuel remaining to visit one of the other two worlds. Brand Jr admits she is in love with the leader of one of the missions – leading to a cringe-worthy monologue in which she declares “love is the only thing which transcends time and space”. But Coop over-rules her and they head for the other world instead. Where they find Dr Mann, Matt Damon. On a world of frozen clouds. Which is just as silly as it sounds – although it does look quite impressive…

Damon admits that Brand Sr solved his equations years before and there is no solution possible without “quantum data” from inside a black hole. So the supply mission is actually a blind – the real plan is to seed the most suitable of the three worlds with the frozen gametes carried aboard Endurance. But ice-cloud world isn’t really fit for colonisation. Cue fisticuffs between Coop and Mann. Coop loses, and is in danger of asphyxiating in the ammonia-heavy atmosphere. Fortunately, he finds the doodad from his helmet that Mann removed which allows him to radio Brand Jr for help. Why he has a little thing on his helmet for long-range comms makes no sense. Brand Jr jumps into the lander and flies to his rescue. Despite Coop and Mann only spending about ten minutes walking away from the base, it takes the lander over five minutes to fly to where Coop is. Mann meanwhile steals the shuttle and heads for the Endurance.

But Coop remotely locks the Endurance, and Mann tries a manual docking but cocks it up – destroying himself and part of the Endurance. Which spins away. So Coop pilots the lander manually into a docking with the Endurance by rotating the lander to match. I’m not sure why he and Brand Jr were shown spinning with their heads pulled to the sides when it had already been established that their seats pivot so their heads would in fact have been toward the centre of rotation. Unfortunately, they’re now too close to the supermassive black hole, and the Endurance on its own can’t pull free. It needs the engines on the lander and the remaining shuttle too. But because plot reasons those spacecraft have to be piloted manually. One is taken by the surviving robot and the other by Coop. Both manfully sacrifice themselves so Brand Jr can head for her lover and take him the frozen gametes to found a new human race. However, the robot is going to try and get the “quantum data” from inside the black hole and transmit it out, so who knows? Maybe Murph will be able to solve Brand Sr’s equations after all…

I’m not entirely sure what to make of Interstellar. The world-building is terrible, despite its claim of scientific accuracy science is sacrificed to drama numerous times, as is plausibility, and its central message about love is the sort of puerile twaddle that Hollywood all too often mistakes for metaphysics. There are some neat ideas, and on several occasions the plot took turns I wasn’t expecting. Although the spacecraft look weird, the film-makers have made a serious attempt at presenting technology that looks plausible and fit for purpose. 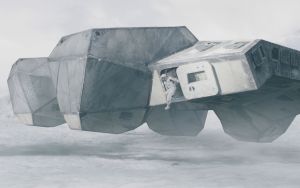 But the pacing of the film is awful – that first third is apparently an entirely separate movie that Nolan bolted onto the front of his… and it shows. Some of the concepts are simplified to the extent they come across as handwavy nonsense. And the ending is a complete let down. Part of the problem is, I think, that the movie bounces from the personal to the bigger picture without any kind of logic or pattern. I suspect it’s an attempt to humanise the big concepts, but it doesn’t work. It just shows how badly shored-up they are by the world of the story. In parts, Interstellar also feels like too much was crammed in, so much that it no longer knows where its focus lies. Clearly it’s meant to be Murph’s story, as we see her entire life through the eyes of her father, Coop. But Coop spends the most time on-screen, as if he were the star of an adventure film. The two stories don’t quite fit – you can certainly have a short linear narrative looping in and out of an episodic story spread over decades, it’s an interesting narrative structure; but for it work you need something to anchor the crossover points. Interstellar tries for this – but the ones that make emotional sense are too few and so Murph’s narrative ends up having to fill in too much story in between breaks from Coop’s adventures. It makes for a third act that is badly unbalanced… which is one reason why the ending has so little impact.

I like that Nolan made an attempt at a serious near-future sf film. And visually, Interstellar is quite impressive. But it’s certainly not the greatest sf film ever made – nowhere close to it, in fact. I’m reluctant to even classify it as a “superior” sf film, as scoring highly on visuals is hardly difficult these days. It has some interesting ideas, but it handles them badly, throws in a helping of philosophical twaddle, and badly mangles what could have been a clever narrative structure. Disappointing.