Once again, there has been some discussion online about self-publishing versus traditional publishing, prompted by a deeply-flawed report by Hugh Howey posted here. Others have already taken apart Howey’s argument, so I won’t bother – although I will point out that equating the quality of a work of fiction with its level of commercial success is a fallacy and not at all useful.

However, on reading Howey’s piece it occurred to me that my own experiences self-publishing my Apollo Quartet over the past two years might prove a more useful example. Especially since I can provide actual numbers – ie, real data. I am an award-winning self-published science fiction author, but my level of commercial success has been very modest. I’m happy with this – I didn’t self-publish in the hope of earning £millions, and I put much greater personal stock in critical acclaim than I do units sold.

The first book of the Apollo Quartet, Adrift on the Sea of Rains, was published on 9 April 2012, and launched at that year’s Eastercon, Olympus 2012 at the Radisson Edwardian Hotel, Heathrow. I priced the signed hardback at £5.99 and the paperback at £3.99, price points I felt were about right for its length, although during the convention it was sold for £5 and £3 respectively. The second book, The Eye With Which The Universe Beholds Itself, was published on 17 January 2013. Since the cover prices for the first book had barely covered the costs of printing the book – and actually resulted in a loss on each sale through Amazon, thanks to its non-negotiable 60% discount – I increased the hardback and paperback cover prices to £6.99 and £4.99. At that year’s Eastercon on the weekend of 29 March 213 to 1 April 2013, EightSquaredCon at the Cedar Court Hotel in Bradford, I sold copies of The Eye With Which The Universe Beholds Itself at £6 and £4. The third book of the Apollo Quartet, Then Will The Great Ocean Wash Deep Above, was published on 30 November 2013, and had the same pricing as the preceding book.

On 30 August 2013, I dropped the price of the paperback of The Eye With Which The Universe Beholds Itself to £3.99 and the ebook edition to £1.99. Initially, the new lower price was only intended to last for the month of September 2013, but I’ve kept them in place ever since. The new paperback price only applies on copies bought through the Whippleshield Books online store. Amazon currently offers the paperbacks for each book at £3.99, £4.84 and £4.97.

When I decided to self-publish Adrift on the Sea of Rains, I was certain that I wanted to do it “properly” – ie, as a small press would do, with a signed limited hardback edition, a paperback edition, and ebook editions in the most popular formats. I did not pay myself as the writer, nor as the cover artist; and I asked a friend to act as editor, with the promise of payment once my small press was in the black. So the only costs associated with Adrift on the Sea of Rains were the actual costs of getting the hardbacks and paperbacks printed up. I used MPG Biddles, a printing firm used by a number of small presses in the UK, and ordered 100 copies of both the hardback and paperback – but only 75 copies of the hardback would be available for sale, the remaining un-numbered copies were for beta readers, family, friends and my agent, etc. I used Biddles again for The Eye With Which The Universe Beholds Itself. Unfortunately, the company went into administration in July 2013, so I was forced to look elsewhere for my hardbacks and paperbacks of Then Will The Great Ocean Wash Deep Above. I chose Lightning Source for the hardbacks, and Amazon’s CreateSpace for the paperbacks. Both are print-on-demand, which meant there was no financial advantage to ordering the full print-run up-front. So for the hardbacks, I have so far had 65 copies printed, and while the paperback has been available for sale through Amazon since 31 November 2013, I’ve only ordered 20 copies to date to hold in stock for Whippleshield Books’ online store. As a result, my unit costs for the books were:

In actual fact, I make £1.55 on each paperback copy of Then Will The Great Ocean Wash Deep Above sold through Amazon, whereas Amazon buys paperbacks of Adrift on the Sea of Rains and The Eye With Which The Universe Beholds Itself from me at 60% discount for £1.60 and £2.00 respectively (and I have to pay postage myself, typically £1.10 for an order of one copy). This gives me a unit profit on each book through each channel of:

So, while it’s possible to make a profit assuming the only costs are printing costs, there’s not enough in it to make it worth the time and effort. However, each book is also available in an ebook edition, priced at £2.99. And that’s where the money lies. The hardbacks and paperback editions of the Apollo Quartet have been, to put it bluntly, subsidised by the Kindle editions of the books. As of 14 February 2014, Whippleshield Books is £939.14 in the black, and I’m pretty sure it’d still be in the red if I’d only published the Apollo Quartet in hardback and paperback. 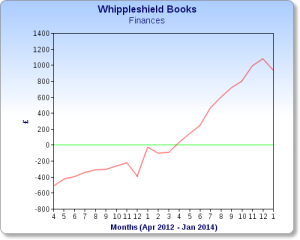 The two dips at the end of 2012 were a result of the invoices from the printers for The Eye With Which The Universe Beholds Itself. Ebook sales were robust throughout 2013 and the dip at the end of the year is the printing costs for Then Will The Great Ocean Wash Deep Above. (The only fixed costs for Whippleshield Books are the annual fee of £143.86 for the ecommerce website and the purchase of ISBNs at £118.68 for ten (each title uses three, one for each edition).) 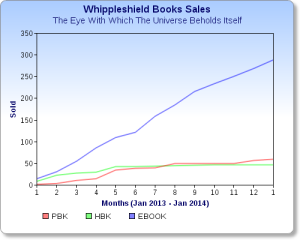 And speaking of Amazon, I can see no relationship between the Kindle rankings and actual sales: 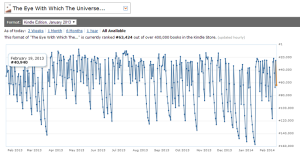 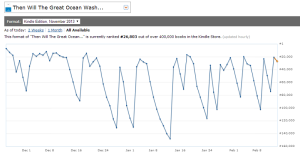 And I’ve yet to be convinced the rankings are in any way useful to the author or publisher.

So, what have I learned publishing the first three books of the Apollo Quartet?

The most obvious lesson is that ebooks are crucial. They subsidise the hardbacks and paperbacks. And of all the ebook platforms, the Kindle is by far the most successful. I never bothered releasing the Apollo Quartet on Smashwords or the iTunes store, but I’m told by other small presses that it’s actually not worth the bother of doing so – over 90% of ebook sales will be from Amazon. I have made the Apollo Quartet available on Kobo, and both epub and mobi editions have been there for purchase from the Whippleshield Books online store from publication dates of each novella. But I’ve sold only single figures of each book from either of those venues.

Secondly, it’s all about eyeballs. If 1,000 people are aware of your book and 1% actually purchase it… that’s 10 copies sold. However, if 100,000 people see it and 1% buy it, that’s 1,000 sales. As a self-published author, it’s up to me to ensure that as many eyeballs see the books of the Apollo Quartet as possible. It’s not just self-promotion. If you’ve built up social capital, you can spend it to spread the word. It is, fortunately, a renewable resource, but it’s also hard work to spend. I put much more effort into getting word out about Adrift on the Sea of Rains, and the sales figures reflect that. (There’s also the possibility that Adrift on the Sea of Rains was a) sufficiently unlike anything else being published in science fiction to stand out, and b) I wasn’t chiefly known as a writer at the time so a little bit of novelty value attached.)

Having said that, timing also plays a part. The Eye With Which The Universe Beholds Itself was published in January, leading many to mistakenly believe it was published in the previous year and so ineligible to be nominated for that year’s award. I published Then Will The Great Ocean Wash Deep Above at the end of November, giving only two months – and over Christmas too – for word to spread before nominations for the BSFA Award closed. The best time to launch a book is between April and August, which gives sufficient time for sales to grow and word-of-mouth to spread. It’s even better if you can launch the book at a convention, as you’ll have a captive audience of your core readership for an entire weekend.

Although everyone says “don’t judge a book by its cover”, I’m pretty sure people do. Several friends and acquaintances have complimented me on the cover art for Adrift on the Sea of Rains but I’ve no way of knowing how much of a factor it was in generating sales. I’ll be releasing a new edition of The Eye With Which The Universe Beholds Itself with new cover art soon, so hopefully that should give some indication of the role played by cover art. I also deliberately chose titles – long titles, which have subsequently proven a bit of an arse to type out all the time – which sounded literary and so signalled the Apollo Quartet was literary science fiction. This may be why the one group of people I thought might buy the novellas have so far failed to do so: space enthusiasts. I sent copies to a couple of space-related websites, but none have so far run reviews. But then I’m not known in that group and have zero social capital there. I still think the Apollo Quartet would greatly appeal to space enthusiasts, but I’ve yet to find a way to get that message to them. Having audiences in two readership blocs can only help sales.

Finally, I could have just published the Apollo Quartet as ebooks and left it at that. That’s all some self-published authors do, and they make a very nice living at it thank you very much. But I felt I needed a small press of my own, and hardback and paperback editions, in order for my novellas to be taken seriously. And that’s precisely what happened. I don’t think Adrift on the Sea of Rains would have been shortlisted for the BSFA Award, and then gone on to win it, if it had only been published on Kindle. But, as I mentioned earlier, I value critical acclaim above units sold, so that dictated how I approached self-publishing.

It’s still my ambition to be published by a major publishing house. I plan to start soon on a novel, and I will not be self-publishing it. When I wrote Adrift on the Sea of Rains I was pretty sure no magazine or small press would publish it – which is why I did it myself. Its success came as a very pleasant surprise; but it has also demonstrated that I can write award-winning science fiction and, just as importantly, helped me find the space in which I want to write, the sort of science fiction I enjoy writing. I’m not a space opera writer, though I enjoy reading it; I don’t want to write cyberpunk or post-cyberpunk, though I admire some sf which is classified as that. I now know the type of science fiction I want to explore in my writing, and that’s what the Apollo Quartet has shown me.

And I also won an award and made around £1000 while doing it.

16 thoughts on “Self-publishing from the inside”