Air, land, sea… and back to air. Space will come later. Here are ten civil aircraft of the twentieth century – because jetpunk is not about dropping bombs on people (it’s just that the military was often the cutting-edge of technology). The only one of the following planes I flew in is the first one, the VC10. 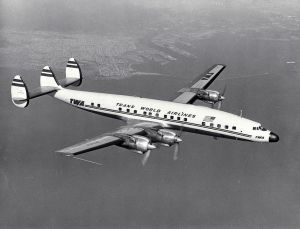 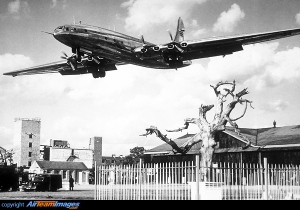 Note: crew does not include cabin staff as that varied; number of passengers could also vary, depending on model of airliner and density of seating.

In 1952, the de Havilland Comet became the first jet-powered airliner in service, but it was grounded between 1954 and 1958 after a series of fatal crashes. As a result, the Tupolev Tu-104 was the only jetliner flying commercially between 1956 and 1958, although it too had a tendency to crash during its early years.

The VC10 should have been much more successful than it was. BOAC demanded an airliner than could take off from the short runways of the airports of nations in Africa, and then complained that the VC10 was more expensive to operate than the Boeing 707. The Boeing required such a long run to take off that a VC10 would be at 1,000 feet before the 707 had even left the ground.

The Boeing Stratocruiser was apparently really noisy – it was piston-engined – so when the turboprop Britannia was introduced it gained the nickname the “whispering giant”. Jets like the Comet were quieter still. And yet James Bond, in For Your Eyes Only, moans that he preferred the Stratocruiser as the Comet crosses the Atlantic too quickly…

One thought on “The future we used to have – special 4”