You know when someone on-line puts together a list – especially for films – and not only do you disagree with the choices they’ve made, but whether or not their choices actually qualify for the list in the first place? Well, someone did that recently with a “top ten space opera movies” list, and half the films on it weren’t even space opera. So here is a proper list of ten space opera films.

Of course, first of all you must define what you mean by “space opera”. According to Wikipedia, it is science fiction “that emphasizes romantic, often melodramatic adventure, set mainly or entirely in outer space, generally involving conflict between opponents possessing advanced technologies and abilities”. For the purposes of my list, I will be even more specific. A space opera must feature interstellar starships, at least one polity that rules tens or hundreds or thousands of star systems (preferably an empire), does not feature projectile weapons, and has some alien races. The exemplar would, of course, be the Star Wars series.

There are a great number of sf films which fit the above definition. Unfortunately, many of them are dreadful. Such as The Humanoid (Aldo Lado, 1979), an Italian rip-off of Star Wars which features Richard Kiel in the title role. Or Starcrash (Luigi Cozzi, 1978), also Italian, which contains the immortal line, “Imperial battleship, stop the flow of time!” There are other films whose focus only implies the existence of space opera characteristics somewhere off-stage, like Stargate (Roland Emmerich, 1994), Barbarella (Roger Vadim, 1968) or even Forbidden Planet (Fred M Wilcox, 1956).

I have not, it must be admitted, seen every film ever made which might qualify as space opera. I have, however, seen a large number of them – both good and appalling. The following ten, I think, are films which clearly meet all of the defined criteria, although perhaps not always in an obvious way. Not all of them, however, were marketed as space opera movies.

Battle Beyond the Stars (Jimmy T Murikami, 1980), makes no effort to hide its inspirations – it’s ripping off Star Wars and The Magnificent Seven Seven Samurai. Nonetheless, there’s much to be enjoyed in it, although none of it can really be taken seriously: the bra-shaped spaceship flown by Richard Thomas, Sybil Danning’s constant double entendres, George Peppard being quite plainly pissed throughout, and Robert Vaughn simply reprising his role from The Magnificent Seven. The ending, it has to be said, does look pretty cheap, but there are plenty of fun moments during the hour and a half leading up to that point. 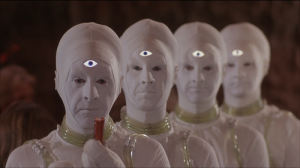 The Chronicles Of Riddick (David N Twohy, 2004) was ostensibly the sequel to Pitch Black, though the only thing they actually have in common is the title character. It’s more Warhammer 40k than your actual space opera, but still close enough to pass. There’s an over-the-top gothic grandeur to the film’s universe – cathedrals in spaaaace! – but the story is little more than a squirming bucket of space opera clichés. Nonetheless, it manages to entertain throughout its length – even if it’s often inadvertently. You have to wonder, however, how much Judi Dench was paid for her walk-on part…

The Empire Strikes Back (Irvin Kershner, 1980) is generally reckoned to be the best of the six Star Wars films. That’s probably because George Lucas left the direction and script in the hands of people who were actually good at them. I’m not a fan of the Star Wars franchise – the original films or the Expanded Universe media juggernaut – although I have fond memories of the first time I saw the original movie. But still, Star Wars and its sequels are the very definition of cinematic space opera. And we know this because they’ve been ripped off so many times.

The Fifth Element (Luc Besson, 1997) was apparently a childhood project of Besson’s on which he worked for decades before finally actually making. And it shows: much of it probably only makes sense inside Besson’s head. It is gloriously stupid – indeed it often revels in its stupidity – and camp, in as much as camp is not something the French do very well (for proper sf camp, see Flash Gordon (Mike Hodges, 1980)). The one thing The Fifth Element does well – and it’s not a quality normally associated with space operas – is leave you with a big grin on your face when it finishes.

Galaxy of Terror (Bruce Clark, 1981). Well, there had to be at least one obscure film in this list. Like Battle Beyond the Stars, this was a New Worlds film and so designed to cash in on the popularity of a film made by a major Hollywood studio – and in this movie’s case, it was Alien. However, Ridley Scott’s Alien is not space opera per se. And for much of its length, Galaxy of Terror doesn’t appear to be. But its ending drags it firmly into space opera territory, given that it’s all to do with some sort of interstellar polity and the quest for a new leader. The special effects are somewhat dated, and the monsters look very rubbery, but the film still has plenty of, well, charm.

Space Truckers (Stuart Gordon, 1996) is a film it’s difficult to say anything nice about as it’s pretty crap. It’s certainly space opera – it has lots of aliens in it, and Dennis Hopper and Stephen Dorff play the crew of an independent tramp space freighter. Nevertheless, treasure the film for Charles Dance’s performance as the villain – he chews the scenery with a insouciant gusto only British thesps are capable of, and also loses body-parts at an embarrassing rate.

Spacehunter: Adventures in Forbidden Zone (Lamont Johnson, 1983) is perhaps best described as Mad Max 2 meets Barbarella, which doesn’t initially suggest much in the way of space opera qualifying characteristics. And given that the story takes place on a single planet, it doesn’t much feel like a space opera film either. But it’s close enough. Ernie Hudson embarrasses as sidekick to Peter Strauss’ title role, but it is Michael Ironside as Overdog, one of the few US actors capable of taking great bites from scenery, who stands out.

Star Trek 5: The Final Frontier (William Shatner, 1989) may well be the most contentious choice on this list. But of all the Trek films it’s the most obviously space operatic – from its opening on a planet where alien scum and villainy congregate to its final confrontation with, er, god. There are those who foolishly think The Wrath of Khan is the best Trek film, but they’re quite clearly wrong. It’s just a submarines in space film, and quite frankly those sorts of movies are much, much better when they feature actual submarines. The Final Frontier is never more than a snigger away from collapsing into farce, and the fact that it never quite does only proves it is proper space opera.

Starship Troopers 1 – 3 (Paul Verhoeven, 1997; Phil Tippett, 2004; Edward Neumeier, 2008). The first is a superb spoof of Heinlein’s execrable novel. The second, subtitled ‘Hero of the Federation’, is not very good and has a plot a little too close to The Thing (John Carpenter, 1982) for comfort. The third – ‘Marauder’ – completely transcends its badness with its gleefully camp fascism, Casper Van Dien reprising his role from the first film with a cheesy knowing grin throughout, and Jolene Blalock playing the best Sigourney Weaver since Alien: Resurrection.

Space opera as a cinematic genre is never going to produce truly excellent films – or even good ones – as should be obvious from the above list. In fact, it is more likely to produce embarrassingly bad ones – such as the incoherent Cosmos: War of the Planets, dull Soldier or confusing Supernova. There are some movies which might have sneaked in, had I been a little more flexible in my definition, such as Dune (though it’s really stretching a point to call it space opera), Serenity (which takes place in a single planetary system), In the Dust of the Stars (AKA Im Staub der Sterne: excellent but bonkers East German sf, but not quite space opera enough), or Humanoid Woman (AKA Cherez ternii k zvyozdam: absolutely mad Russian sf film – or so I assume from the badly-butchered English-language edit I’ve seen, though I am told the original Russian version is actually very good).

No doubt I have missed off some obvious films, but at least I think the ten I’ve chosen actually are space opera. Sort of.