The first programme item I was on at Illustrious, the 2010 Eastercon last weekend, was “Read This Book”. It was, however, cancelled, perhaps because it was scheduled against the BSFA Awards. I can’t say I’m too upset about the cancellation – and the Award Ceremony is one of the few Eastercon programme items I make a point of attending. Also worth noting is that even by Saturday afternoon, right up to the point where I learnt the panel was cancelled, I had no real idea which novel I was going to urge the audience to read…

But right now, on this day of this year, with the benefit of hindsight and more thought than I was capable of during Illustrious, I am going to imagine that the novel I would have chosen for the panel, that the novel I would have chosen until another one comes along and completely blows me away, is actually, er, two novels. And, given what I have written about science fiction on this blog over the past couple of years, they are choices that may surprise people. (Having said that, people who know me also know how much I love these two novels.)

The first one is…

My absolute favourite science fiction novel is Coelestis by Paul Park. I demand rigour in my science fiction. If you can change the background, and the story remains unchanged, then it isn’t sf. Yet Coelestis is completely unconvincing as sf. It is defiantly not-sf science fiction. And that is one reason why it is so brilliant. It is also beautifully written, and extremely unsettling.

Simon Mayaram, a junior consular official, has recently arrived on a tide-locked colony world distant from Earth. At the orders of his boss, he reluctantly takes the consul’s place at a party thrown by the local colonial movers and shakers at Goldstone Lodge. Also present is Junius Styreme and his beautiful daughter, Katharine. The Styremes are aliens, members of one of the two races native to the planet. Prior to the arrival of humanity, they were enslaved by the planet’s other race, the Demons. The humans wiped out the Demons and freed the aliens. Now the aliens show their gratitude – the rich ones, at least – by using drugs and surgery to become human. But not everyone feels the same way. A group of rebels attacks Goldstone Lodge, killing all those present. Except Simon and Katharine. They escape but are quickly captured. The rebels take them across to the planet’s dark side, where they discover a surviving Demon holds the rebels in thrall. The Demon, and the loss of her drugs, slowly returns Katharine to her alien nature. As Simon, who loves her, watches in horror…

John Clute has described Coelestis as a “Third World” novel, but to me it is very definitely post-colonial sf. It is also anti-colonial. The world of the novel doesn’t map exactly onto India – or any other ex-Empire colony – but the parallels are clear. The life-style enjoyed by the humans is very like that of the British in the Raj. The desire of the aliens to mimic their masters bears some similarities with the way India has subsumed elements of British culture – such as the language (which remains the nearest the country has to an official language). Park makes these likenesses even starker by refusing to invent a society for his world. It is the twentieth century in all but name – although there are intriguing hints of a future Earth beyond the characters’ understanding. But for the aliens, the first section of Coelestis could be set in Mayapore.

But once Simon and Katharine find themselves on the dark side, the nature of the story changes. Whereas Park had initially used the colonials-in-situ, and their struggle to remain inappropriate, as commentary, he uses Katharine and Simon in captivity to first deconstruct the identity of the aliens, and then to deconstruct Simon’s identity. It makes for an discomfiting read. Coelestis uses its limited toolbox of science-fictional conceits to address only those areas Park wants to study. The rest is immaterial, and so no attempt at rigorous or plausible world-building is made. It’s not there because it doesn’t matter, because not having it there points up all the more the difference between the aliens and the humans, and humanity’s actions.

Coelestis is not a comfortable read. But it is one of those science fiction novels which can change the way you look at the world. And there are remarkably few of them.

My second choice could only be science fiction. Unlike Coelestis, it has rigour. But I also demand authenticity in my sf. Take Back Plenty by Colin Greenland is proudly inauthentic, it glories in its lack of authenticity. Its story takes place in a Solar system that only ever existed in wildly unscientific pulp science fiction. It features canals on Mars, a Venus of impenetrable jungles, and a cast of colourful aliens. It is a clever postmodern space opera and a rollicking good read. 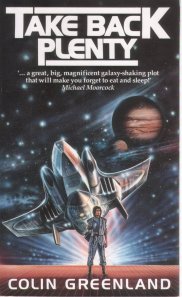 Tabitha Jute is captain of the space barge Alice Liddell. While on Mars, Tabitha inadvertently causes a near-riot, and is subsequently fined by the authorities. But she doesn’t have the money to pay the fine. Fortunately, she meets up with Marco Metz, leader of the cabaret act Contraband, and he contracts her to take him and his band to Titan. First, they stop off at Plenty, an alien artefact orbiting Earth. It had been built by the alien Frasque, but they’d been booted out of the Solar System by the Capellans – highly advanced aliens who’d bootstrapped humanity into space, but now kept everyone sealed within the orbit of Pluto.

Of course, Contraband isn’t really a cabaret act and Tabitha is forced to flee Plenty with the members of the band. They crash-land on Venus, are rescued by pirates, and then delivered to the Capellans.

To say anymore would give away the novel’s climax.

The story of Take Back Plenty is told by a mysterious, and not entirely reliable, narrator – complete with authorial interventions. Sections of the book are also interspersed with conversations between Tabitha and Alice, the space barge’s AI persona. These conversations round out Tabitha’s background and character. They also help explain the Solar system of the story. Tabitha Jute is one of the great female characters of science fiction. She is not feisty, she is not kick-ass. She is not strong because she was raped as a young woman; she is no one’s Perfect Girlfriend. In a book which revels in its inauthenticity, she is stunningly real.

When Take Back Plenty was published in 1990, I remember there being a lot of talk about it. It went onto win both the BSFA and Arthur C Clarke Awards. I’ve argued in the past that it kicked off the British New Space Opera movement. But the more I think about it, the more I think that’s not the case. Take Back Plenty re-appropriated the tropes of pulp space opera, but it used them in a knowing and postmodern way. It didn’t add hard science or “grit” to space opera. It added realness, yes, and dirt under science fiction’s fingernails; but its tropes were still the candy-coloured conceits of early space opera. By doing this, the novel privileged story, not setting –  yet another difference to New Space Opera. So much so, in fact, that Take Back Plenty even aped those old serials by giving poor Tabitha no actual control over the plot.

On its publication, Take Back Plenty promised a new and exciting trend in British science fiction. Sadly, that never materialised. Greenland’s novel was a one-off. He followed it with a pair of sequels, Seasons of Plenty and Mother of Plenty; but the vision had soured and neither matched the joy of Take Back Plenty. Greenland wrote one other sf novel, Harm’s Way, a steampunk space opera, but has written no novel-length science fiction since. Which is a shame.

So there you have it. Two science fiction novels I love and admire. (Science fiction novels I love but don’t admire would be a much longer list.) Sadly, both are currently out of print. Obviously I think they should be on the SF Masterworks list – assuming rights are available and all that. I urge everyone to seek out second-hand copies of these two books and read them. Or perhaps an enterprising ebook publisher might like to consider editions on Kindle (providing the authors are willing, of course).

Coelestis and Take Back Plenty are a pair of novels I am happy to champion. And I can even do that without feeling embarrassed they’re science fiction.

2 thoughts on “Read this book!”