Today is the 50th anniversary of Yuri Gagarin’s flight. Half a century ago, Gagarin was the first human being to leave this planet – albeit for only one hour and forty-eight minutes. Thirty years ago today was also the launch of the first Space Shuttle to reach orbit, Columbia. Which was sadly lost eight years ago on mission STS-107 when it broke up on re-entry, killing its crew of seven. I am choosing to honour Gagarin’s achievement – and Columbia’s crew; and all those who have been in space, however briefly – in my own way:

It will be titled Rocket Science, and it will be published in 2012 by Mutation Press.

This announcement is advance warning. I’m looking for submissions, but I won’t be open to receive them until 1st August 2011. I want stories and non-fiction of up to 6,000 words, which meet the following description: 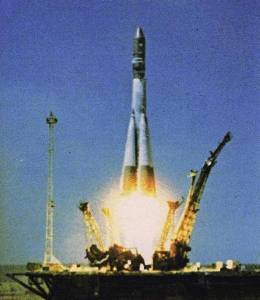 Science fiction does take place in a vacuum. Travel more than 100 kilometres vertically from where you’re standing, and you’ll be in space. Where there’s no life-sustaining air; where the cold, and direct sunlight, can kill. There’s no gravity, and background radiation will cause cancer in one in ten people. Yet the future of our species quite possibly lies up there, or somewhere that will require us to cross space to reach.

Too often, science fiction glosses over the difficulties associated with leaving a planetary surface, traveling billions of kilometres through space, or even living in a radiation-soaked vacuum. The laws of physics are side-stepped in the interests of drama. Yet there’s plenty of drama, plenty of science fiction drama, in overcoming the challenges space presents. Whether it is, for example, an alternate history take on the Apollo Lunar landings; the discovery of an alien artefact on a moon of Jupiter; or the story of a mission to the nearest star.

ROCKET SCIENCE is looking for stories which realistically depict space travel and its hazards. The reader needs to know what it would be like to be there. This doesn’t mean stories must be set in interplanetary or interstellar space; but the technology and science involved must be present somewhere. It could be a story set in a spacecraft, on an asteroid or space station; or about a mission soon to leave Earth’s surface. It could be a first contact, a rescue against the odds, or a study of some unusual space phenomenon. Whatever suits. Don’t be afraid to be literary.

You can find more details on the website here. I’ve also put together four flyers (PDF), which you can print out, hand to friends, stick on the wall of your den / study, etc., etc. You can find them here: one, two, three and four. If you have any questions, feel free to email the editorial address given on the flyers and website.

4 thoughts on “An important announcement”