Actually, it did have a name, Innominate, but since that means “not named or classified”… The con in question was, of course, 2017’s annual Eastercon, which took place at the Hilton Metropole Hotel at the National Exhibition Centre near Birmingham International Airport over the Easter weekend. Hence, er, the Eastercon. Innominate was the sixty-eighth such to take place, and was actually a rescue bid – the Eastercon was originally supposed to be in Cardiff. The Guests of Honour were Pat Cadigan, Judith Clute and Colin Harris, two of which were at least names known to me.

My first Eastercon was way back in 1990, although I missed several during the mid-1990s, and actually dropped out of fandom when I returned to the UK in 2002 until I was persuaded to attend the Worldcon in Glasgow in 2005. Innominate was my fifteenth Eastercon, and my sixty-first convention; it was also my second visit to the Hilton Metropole Hotel, since the 2011 Eastercon also took place there.

In the past, I’ve tended to turn up to Eastercons around 4 pm on the Friday, but they seem to start earlier these days, and I was actually supposed to be on a panel at 4 pm on the Friday, so I bought a train ticket to get me to Birmingham International by about 1 pm. As it was, the panel was cancelled several days earlier after three of its members pulled out for various reasons. It was on the short fiction categories for this year’s Hugo Awards – not a subject you’d think I’d be a natural fit for, but never mind. Unfortunately, it was cancelled after I’d made an effort to read the nominated short stories. Which I did not like (and I didn’t even bother reading the JCW, as its shiteness was a given). I’d still like to read a couple of novelettes, as there are at least two authors on the shortlist whose fiction I admire, but I can’t say any of the nominated novellas appeal (the irony, from the man who thinks the novelette category should be napalmed).

The Hilton Metropole is a deeply weird hotel. I am pretty sure I had to pass through a mirror to reach my hotel room, which was located some ten minutes’ walk away from the reception and main con bar. It was a very nice room, although the en suite had no door and the shower cubicle resembled a telephone box. The television also had only a dozen or so channels, and I found myself somewhat freaked out on the Saturday morning after watching five minutes of Made in Chelsea as I hadn’t realised such vacuous human beings actually existed. 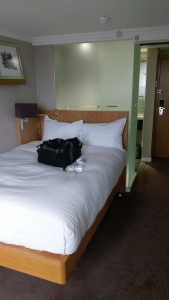 Anyway, after a typically bad train journey on a CrossCountry train to Birmingham, and then a march through the NEC – which has improved considerably since 2011 – from the station to the hotel, I checked in. And was told I’d reserved four nights. This will prove important later. Since Birmingham is only an hour and bit by train from where I live, I’d planned to travel home on the Monday evening. So, no need to book Monday night. And I’m not sure why I did. But cancelling it was easy – at least, it was a lot easier than accidentally booking a night too few, as I did in Mariehamn at Archipelacon…

In the bar, I met up with Will and Jen… And that’s pretty much how the con went: time spent in the bar, chatting with friends, interspersed with expeditions to the dealers’ room, or trips up to my room. The food was generally good, if expensive. There was a real ale bar serving four ales from Purity, at £5 a pint, which I mostly drank, to the extent I think I’d over-hopped myself by Sunday night.

I spent most of my time with the aforementioned Will and Jen, but also Karen and Ewan, and Andy Knighton. Karen is perhaps better known as KT Davies, the author of, among other titles, the very good Breed, and her mention of a sequel led to a series of suggested titles, from Breed 2: The Breedening to the somewhat dubious Breed 2: Breed Harder to the downright nasty Breed 2: A Good Day to Breed. (Only two of those were mine.)

I also spoke to a number of other people, friends and strangers, many for shorter periods than I’d have liked. I was introduced to Pat Cadigan, who I don’t think I’d ever met before, by Dave Hutchinson, and she immediately started calling me “Sales”, which I think is good. I called Dave’s BSFA Award win for Europe in Winter correct, and it was well-deserved. It was, in fact, a good set of winners all-round.

I spoke to Swedish and Finnish fans, most of whom I knew, and even introduced myself to someone I thought was a new fan (from the UK), only for her to admit she followed me on Twitter. (So it’s not all bots, then. Phew.)

On the Sunday evening, I was on a second panel, Optimism in SF. I mentioned this to Kari Sperring that morning at breakfast and she actually choked on her coffee. In the event, I thought the panel went quite well and I only managed one “… I had a point to make but now I can’t remember what it is”. And if at least one person reads Dhalgren or Jenny Erpenbeck’s The End of Days as a consequence of the panel then job done.

The hotel continued to be weird throughout the weekend. If its mind-bending layout were not enough, one morning I stepped into the lift and there was someone already there despite my room being on the top floor. The lift also start giving me electric shocks whenever I pressed the call button. Which was not fun. On the Saturday night, the most desperate survivors of two boybands, Westlife and Boyzone, apparently performed in the hotel ballroom as Boyzlife… so the hotel was filled thirtysomething women trying desperately hard to recapture their teen salad days. It was a little surreal – even more so than the OAPs who filled the Grand Hotel in Scarborough during last year’s Fantasycon.

I bought a dozen books, which is slightly more than in recent years – the dealers’ room was much better than last year’s – although not all of them were by female sf authors, or indeed on the wants list. In fact, I don’t think any were from the wants list. Ah well.

Three for SF Mistressworks. I’ve been after Falcon for a while. I think it’s Bull’s only sf novel. The Killing Thing I bought more for the cover, and because it’s a Kate Wilhelm novel, than because of the story. And I definitely bought The Dancers of Noyo because of the cover, although I’ve read St Clair before. 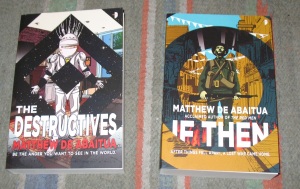 I’ve seen If Then and The Destructives recommended several times by Nina Allan, so I thought I’d give them a go. The author was apparently at the con, but I never bumped into him – not that I know what he looks like…

Some random old sf. The Undersea Trilogy – an omnibus of three 1950s juveniles, Undersea Quest, Undersea Fleet and Undersea City – is on my list of sf set at the bottom of the ocean. I bought Virgin Planet because I have the Beacon edition of the book (ie, the “spiced up” edition) and I want to compare it to the original. I just liked the cover of Purple-6. And Those Who Can: A Science Fiction Reader looked interesting: it contains stories by a bunch of well-known names, followed by an essay by them on an aspect of writing as it relates to the story. And it’s a surprisingly good bunch of names: not just the usual ones like Silverberg, Pohl, Ellison, Knight, but also Delany, Russ, Wilhelm and Le Guin. I’m currently reading it, as can be seen from the bookmark.

I left the con on Monday morning, after giving breakfast a miss. I’d been up late the night before with some Gollancz authors, and when asked if I was a writer, got to use the line, “Yes, an award-winning one in fact.” All three nights were pretty late, but only the first one was bad as I’d eaten little during the day. Although the food and drink was expensive in the hotel, I still managed to spend roughly as much as I usually do at Eastercons. The journey home was surprisingly good – the train from Birmingham was a CrossCountry one, and the platform was very busy, but I actually managed to get a seat on it. Yes, really. In fact, the carriage I was in didn’t look at all busy, even though CrossCountry had done their usual and only made up the train from four carriages. I was home by lunch-time, and as soon as Oscar saw me he ran into his room and stared pointedly at his empty food bowl. I didn’t get a telling-off this time, however.