It’s that time of year again when the blogosphere is suddenly full of awards eligibility posts. Some people consider them useful and some people think they’re a bad thing. I used to believe there was something a little bit off about them, and I put that down to being, well, British. Blowing your own trumpet and all that. Bad form, you know. But my opinion on them has hardened of late. Having seen what a mockery the Hugo Awards were last year – which is not to say they haven’t been for many, many years – but in 2014 I was more than just an observer on the sidelines…

In 2014, I joined the Worldcon, which allowed me nominate works for the award. I took my vote seriously. I read novels I believed might be award-worthy, so I could put together a reasonably well-informed ballot. But the way everything worked out only brought home to me quite how corrupt is the culture surrounding the Hugos. And part of that culture is the awards eligibility post.

So why are they bad?

It’s not a level playing-field. If Author A lists the eligible works they had published in 2014 and a couple of thousand people see that list, and Author B does the same but hundreds of thousands of people see their list… and if 0.01% of those people then nominate a work, guess who’s more likely to appear on the shortlist? Popular vote awards are by definition a popularity contest, so to make it acceptable for those with the loudest voices to shout across the room just makes a mockery of the whole thing.

Awards are fan spaces. Authors should not invade fan spaces. This is not to say that authors are not fans themselves. And there’s no reason why they shouldn’t behave as fans in fan spaces. But an awards eligibility post is an author-thing not a fan-thing. (This leaves posts where authors recommend others’ works in something of a grey area. Big Name Authors have Big Loud Voices, and their endorsement can still skew an award.)

Authors get no say in how their works should be received, and that includes whether it is deserving of an award. (Whatever they might think privately, of course.)

If fans are serious about voting for awards, then they should make an effort to stay informed. They shouldn’t nominate works because they were reminded of that work’s existence by its author. You don’t nominate on a fucking whim. Yes, the field is large, and it’s easy to miss something worthy of an award. But voters have a responsibility to make an informed vote, and while no one expects them to have 100% information – those days are long past – just waiting for their favourite author to provide a list for them to choose from is just plain irresponsible.

And, needing to be reminded of something you consider one of the best pieces of fiction of the year? Seriously? It’s so good, you’ve completely forgotten it a few months later? Awards, as a general rule, are supposed to go to the “best” of something – the Hugo Awards actually include that word in their title. You’d imagine a work which is the best to appear during a year would at least be memorable.

(The above, of course, applies to the nomination process. The actual voting usually settles things out. No matter how bad the shortlist, voters usually pick the right one – as they did last year. But the more shit the shortlist, the more the probability of an unworthy winner approaches one.) 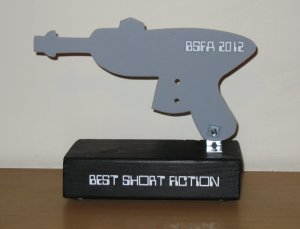 We’re currently in the middle of the BSFA Award nominating period – it closes on 31 January. This year, they’ve changed the rules. Now, we only get four nominations per category, instead of an unlimited number. It’s going to make for a very interesting award. Will the shortlists skew to popularity much more than they have done in the past? Or will they do the opposite… and end up with such a wide spread of nominations that only a handful are required for a work to be shortlisted? I guess we will find out in the months to come…

22 thoughts on “On awards eligibility posts”