More culture splashed across the silver screen… although it’s a pretty loose definition of “culture” for some of the films I’ve seen over the past few weeks. More and more, I find myself avoiding recent Hollywood product (and I use the term “product” deliberately) in favour of arthouse or classic Hollywood films.

Rio Lobo, Howard Hawks (1970, USA) I freely admit Hawks’ Rio Bravo (1959) is one of my favourite films, and certainly my favourite Western, and I was aware Rio Lobo is often considered to be little more than Hawks having another bash at that earlier film. Like Rio Bravo, it stars John Wayne as a sheriff, who must defend a town against a cattle baron’s henchman and… The difference here is that Wayne was a Union officer and the film opens with an ambush by Confederate troops on a gold train he’s responsible for. Later, he meets the Confederate captain who commanded the ambush in a POW camp and the two become friends… and later allies against the evil cattle baron. A solid Hollywood western, but not a patch on Rio Bravo.

Beau Travail, Claire Denis (1999, France) I forget why I put this on my rental list, possibly I’d seen it on some list of top films or something. I’d seen a few by Denis before, and while they were good I can’t say they’d blown me away. But Beau Travail… It’s set in Djibouti among soldiers of the French Foreign Legion, and is framed as the memories of a sergeant after the fact. A new recruit joins the troop and the sergeant becomes envious of his looks, ability and popularity. He tries to kill him by sending him out into the desert with a faulty compass, but the legionnaire survives. The film ends with the sergeant dancing, representing his suicide after failing to adjust to civilian life. It is quite brilliant. I’m pretty sure Beau Travail is going to make my best of the year. It’s also the third film I can think of that’s lifted from good to near-genius by an unexpected dance scene, the other two being François Ozon’s Water Drops On Burning Rocks (2000) and Werner Herzog’s Bad Lieutenant: Port of Call New Orleans (2009).

Star Trek: The Next Generation Season 7 (1993, USA) So I finally got around to watching the final season of Next Gen, and now a week or two later I have very little memory of it all. I think I spent most of the time marvelling at how much make-up Marina Sirtis and Gates McFadden were wearing. The plots of the individual episodes were, I seem to recall, rather dull and it all felt very formulaic and “the [tech] does the [tech] with the [tech]”. There were, as usual, some totally cringe-worthy episodes and, surprisingly, one featuring Lwaxana Troi that didn’t make me want to claw my eyes out (it was a bit barf-inducing, though). Ah well, seen them all now. Seen all of DS9 as well. Voyager next, I guess. Sigh.

Outpost 11, Anthony Woodley (2012, UK) The Second World War is apparently approaching its centenary and three men at a listening outpost – listening to Russian radio traffic (er, they were our allies during WWII) – are slowly driven mad by something strange out in the ice and cold. Everything looks a bit steampunk (er, the Victorian Age ended nearly forty years before WWII), the acting is terrible, and the pacing is abysmal. A film to avoid.

Gilda, Charles Vidor (1946, USA) Glenn Ford is a gambler in Buenos Aires shortly after WWII. He ends up working at an illegal casino – though you’d never guessed it was illegal from all the glitz – as floor manager. Some months later, the casino owner goes away on a trip and returns with Rita Hayworth, his wife. Cue smouldering hatred between Ford and Hayworth. Meanwhile, the casino owner is neck-deep in a cartel among tungsten mine owners. A quality Hollywood noir this one. Hayworth is mind-blowing. Definitely worth seeing.

Queen Of Blood, Curtis Harrington (1966, USA) This was actually a rewatch, but it’s such a good film it’s worth mentioning again. It’s another US movie cobbled together from footage from two Soviet films – мечте навстречу (Mechte Navstrechu) and Небо зовет (Nebo Zovyot), with additional US-filmed material starring Basil Rathbone, John Saxon, Judi Meredith Florence Marly, and, yes, that is Dennis Hopper. Alien crashlands on Mars, Earth sends rescue mission, they find sole survivor Marly, but during journey back to Earth she proves to be a vampire and kills all of crew except Meredith and Hooper, who kill her. Marly is astonishingly good as the titular alien, Meredith is treated like just one of the crew (a gender-equal future society, in a 1966 film!), and the footage from the Soviet movies is weirdly beautiful. I love this film.

Project A, Part 2, Jackie Chan (1987, Hong Kong) When I was living in the UAE, I watched quite a lot of Jackie Chan films – they were readily available there on VCD. It’s nineteenth century Hong Kong and Chan is drafted in as police superintendent in charge of a notoriously corrupt district. With the help of the Marines, he cleans up the  district, battling the local kingpin, an Imperial Chinese spy and his henchmen, and the previous superintendent who has been promoted to a position where he can allegedly do no harm. Also involved are a bunch of Chinese revolutionaries  – which is who the Imperial Chinese spy is after. There’s lots of cleverly-choreographed action, including a brilliant sequence with some chilis, and it’s pretty much a pure hit of Jackie Chan comedy-action. Definitely worth seeing.

20 Million Miles To Earth, Nathan Juran (1957, USA) This was on Film4 one weekend afternoon, so I plonked myself in front of the telly and watched it. My expectations were low and it still failed to meet them. A spacecraft on a mission to Venus crashlands in the sea off Sicily on its trip back to Earth. Some Sicilian fisherman rescue the sole survivor, but a young local boy also finds a specimen jar from the rocket containing a blobby thing, which promptly grows into a Godzillary-type creature and subsequently terrorises the island. This is a B-movie, with a B-movie script and B-movie talent, and notable only because Harryhausen animated the ersatz kaiju. Eminently avoidable.

Gentleman’s Agreement, Elia Kazan (1947, USA) This was a surprise. I forget where I stumbled across mention of it, but it was a good call. Gregory Peck plays a journalist who’s just landed a top gig with a New-York-based magazine. He proposes an article series on anti-semitism, but initially finds it hard to present the subject in a way that will really get it across to readers. Eventually he decides that he will tell everyone he is Jewish, and experience anti-semitism for himself – he’s new in New York, so there’s no one around who’ll know different (except his editor, of course, his mother, and his WASP-y fiancée). And experience it he does. Both conscious and unconscious. The topic is handled intelligently and sensitively. Sadly, I doubt a film like this would be made today. 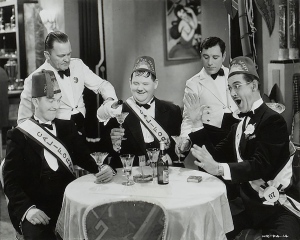 Sons of the Desert, William A Seiter (1933, USA). Also, by various hands, We Faw Down (1928), Their Purple Moment (1928) and On the Wrong Trek (1936), which were all on the same disc. Sons of the Desert sees Stan and Ollie pull a fast one on their wives in order to attend the titular organisation’s annual bash in Chicago, which their wives have forbidden. Ollie fakes an illness, and the pair are allowed to travel to “Honolulu” to recuperate. Everything goes as planned… Except the ship the pair are allegedly returning on sinks. Just after they’ve lied their way out of trouble on that, the wives sees a newsreel about the Sons of the Desert parade in Chicago… and there are Stan and Ollie whooping it up. We Faw Down is a silent with an earlier version of the plot – Stan and Ollie want to attend a poker game so lie to their wives… only to get caught up in various shenanigans and consequently caught out. I thought it funnier than Sons of the Desert. Their Purple Moment is another silent – this time Stan & Ollie are out for some fun with some of Stan’s saved cash, they end up having dinner in a club with a pair of women (not their wives), but it turns out Stan’s wife has replaced his cash with coupons. Also a good one. Laurel and Hardy only make cameos in On the Wrong Trek, which is actually about another actor back from holiday telling his office mates about the disastrous week he’s just spent on the road to California with his wife and mother-in-law. There’s a quite good musical number, but that’s about all.

Red 2, Dean Pariscot (2013, USA) A bunch of oldies run around like twentysomethings, committing implausible mayhem and I completely forget what the actual plot was about. I’d dismiss this as complete tosh, but the script was pleasantly witty and though it trod a fine line it actually managed to avoid falling into stupid. It felt more like a European action thriller than a Hollywood one (amusingly, it featured a Russian aircraft masquerading as a USAF one, the precise opposite of all those Hollywood Cold War films…). For a beer and pizza night, you can do a lot worse than this film.