Whippleshield Books is now just over one year old and has to date published two books, one of them an award-winner. Although I started up the press in March 2012, and published Adrift on the Sea of Rains on 9 April 2012, Whippleshield Press’s online presence didn’t happen until 25 May 2012. So that’s a handful of days over twelve months, plus or minus a month or two. It has been… an interesting year.

Any discussion of self-publishing is sure to be over-shadowed by the likes of Hugh Howey and Amanda Hocking. They have been amazingly successful at it – and, to be honest, I can’t see why. I’ve read Wool, it’s not very good. Which pretty much demonstrates there is no magic formula to success at self-publishing. Something in Wool clicked with a large number of people, but whatever it was it’s far from obvious. What this means is that Howey is not an expert on self-publishing, and has very little that’s useful to add to the debate. And, in all fairness, he has admitted as much: this is what worked for me, he has said, but it doesn’t mean it will work for you. The media, however, are only interested in success stories, as if somewhere in every one of them is an obvious recipe for success. There has been some discussion recently of such “survivor bias”, and to anyone with any common sense it’s plain that luck is not a transferable skill. If one ticket wins the lottery, buying the ticket with a number one up from it does not mean you will also win.

Commercially, Whippleshield Books has not been a “winner”. I’m okay with this – I didn’t set it up to make me pots of money. If anything, I expected it to be a financial burden for much of its life. Happily, it went into the black in March this year… but then the ecommerce annual fee came due and I also had to reprint Adrift on the Sea of Rains. But it’s been back in the black since the beginning of May and seems likely to remain there. Whether it’ll have earned enough to pay the cost of producing book three of the Apollo Quartet is a different matter, however. I’ve been funding Whippleshield Books out of my own pocket so far, so if it doesn’t it won’t affect my planned publishing schedule.

Speaking of which, I’ve received three submissions in the past twelve months. One I bounced immediately as not meeting the guidelines. The other two I rejected after requesting the full ms. To be honest, I had expected to be sent more, even if most would prove completely unsuitable. I can only surmise I’m the only person writing the type of fiction I want to publish. Happily, I’m not the only person who wants to read it, as sales for the first two books of the Apollo Quartet have shown: 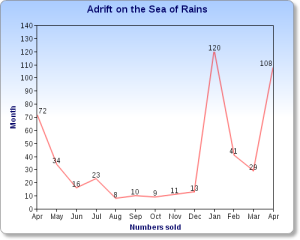 The two spikes are due to mentions in the Guardian (here and here). The second one coincided with Adrift on the Sea of Rains winning the BSFA Award, so the win may also have contributed. But given that the full novella was published in the BSFA Award booklet for members, I suspect it didn’t have that much effect. I’ve added “WINNER OF THE 2012 BRITISH SCIENCE FICTION ASSOCIATION AWARD” to the product description on Amazon, but I’ve no idea if that has had any impact.

Adrift on the Sea of Rains continues to sell well on Kindle – better in the UK than in the US, it must be said. The number of Amazon paperback orders has also picked up, typically now around one a week. Of course, I’d sooner those sales took place on the Whippleshield website, but I know of no way to drive customers there from Amazon. When I mentioned in a previous blog post that Kindle sales were “more or less pure profit”, someone on a forum responded: “I had to laugh at this one. Shows a real lack of understanding of the costs involved in running a successful website. Electronic files take up disk space which has to be paid for. The transfer of electronic files uses bandwidth that has to be paid for”. To which I can only say, if you’re paying for storage of a single electronic copy of your book, and can actually work out the cost of uploading that file to Amazon, then I suspect other people are laughing at you. 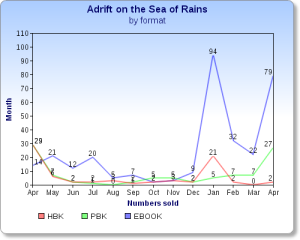 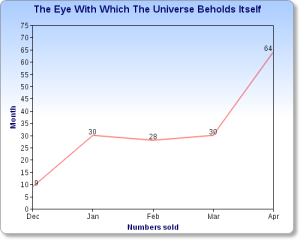 Of course, The Eye With Which The Universe Beholds Itself has only been available since late January this year, so around four months in total. And word about Adrift on the Sea of Rains is still making its way throughout the genre landscape – such as making an appearance on SF Squeecast here, courtesy of Paul Cornell. Two books is a slim presence, especially given that they’re novellas too. I’ve had no short fiction published in genre venues with large audiences, at least not yet. So my platform remains small, and still chiefly confined to the UK.

Interestingly, Wunderwaffe, a short story of 9000 words which originally appeared in Anarchy Books’ Vivisepulture anthology, and which I produced as a chapbook limited to 12 copies before publishing it on Kindle, has been selling surprisingly well in the US. This may due to its low price. The $1.16 price-point, and the clearly stated length of 27 pages, however, hasn’t prevented a couple of people from leaving one-star reviews complaining that it isn’t a novel. I’m especially impressed by the review which states “stick to established authors that don’t give short stories under the cover of a book”. I think you’ll find “established authors” have also been known to publish short stories on Kindle too. In fact, John Scalzi’s latest novel was serialised, with each chapter sold as a separate ebook (not entirely the same thing, I know, but you know what I mean).

So there you have it – Whippleshield Books after twelve months. More or less. Plans for world domination may have to be put back another year or so. I believe Adrift on the Sea of Rains is the first self-published work to win a BSFA Award – although there are a couple of self-published works in this year’s Hugo shortlists. The stigma attached to the word “self-publishing” is slowly being eroded, but that doesn’t mean the self-published market is still not full of badly-written and poorly-edited derivative rubbish. But the good stuff is getting easier to find. I like to think that Whippleshield Books is, and will be, seen as a purveyor of that “good stuff”.

11 thoughts on “Self-publishing – one year on…”