Liz Williams is one of those British sf writers who was first published in the US. Her debut novel, The Ghost Sister

, was shortlisted for the Philip K Dick Award in 2001, but has never received a UK edition. It wasn’t until her second novel, Empire of Bones

, that she had a novel published in the UK. And yet, despite writing more than a novel a year since then, and even being shortlisted for the Arthur C Clarke Award in 2006 for Banner of Souls

, she’s not a writer who seems to have impinged much on my map of the genre. I’m not entirely sure why. As far as I could tell, her science fiction was of a variety that would appeal to me. Yet I never bought or read one of her books. Perhaps it was because she seemed focused on her Detective Inspector Chen series of Chinese fantasy novels, which don’t interest me in the slightest.

Whatever the reason, it’s a lack I’ve now rectified. Winterstrike

is the first book in a planned trilogy. It was first published in 2008, although no sequels have yet to appear. It is set on a far-future Mars which bears very little resemblance to the Mars of science fact. Parts of the story take place on Earth, which is also greatly changed. 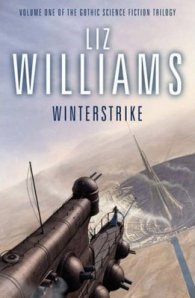 There’s a lot of praise for Winterstrike

and Liz Williams reproduced on the covers of the paperback edition I read. So it would not have been unrealistic to have high expectations of the book. Perhaps they were too high. While I enjoyed Winterstrike

, and thought parts of it very good, it left me overall feeling a little underwhelmed. It may well be that the misleading back-cover blurb didn’t help. It claims the novel is about Hestia Mar who has been sent to Caud, an enemy city-state, “to recover details of an ancient weapon”. Which she finds and passes to her home city of Winterstrike, an act which “has virtually guaranteed the use of the weapon”. Her cousin Essegui, meanwhile, “discovers a plot by creatures who hold the secrets of the Martian past, and its future”. Which all sounds very exciting and science-fictional, but is no real preparation for what the story actually describes.

Hestia is indeed a spy for Winterstrike, looking for data on an ancient weapon in Caud. But when she finds it and passes the data back to her handler, the effects of the weapon’s use are not described until near the end of the novel; and even then it’s peripheral to the main plot. Hestia’s story meanwhile goes off on an entirely different path: while returning to Winterstrike from Caud, she finds herself in the ghostly city of the Noumenon, and stumbles across the army of Mantis, a clone of an ancient despot. Essegui, on the other hand, is searching for her sister, Shorn, who has escaped after being imprisoned in her room for consorting with a man-remnant. But Shorn is not really Eseegui’s sister, nor in fact is she really human. Also important is Earth’s Centipede Queen, who has come to Mars to find Shorn, for reasons not fully disclosed, but which result in Hestia travelling to Earth to tell them their queen has gone missing…

The two main narratives of Winterstrike

, Hestia’s and Essegui’s, frequently come close to touching but never quite meet. But they do overlap, often taking place in the same parts of Mars. Such a carefully-braided plot is not especially unusual, but the voices of the two characters are so similar it is sometimes hard to distinguish between them. It’s only when Hestia reaches Earth that the locales differentiate the two threads sufficiently to keep them separate in the mind of the reader. Even then, the novel never quite reveals what’s going on. When Shorn is revealed as a bio-engineered experiment, it comes as a surprise because there’d been no foreshadowing in her character, nor had the existence of the technology to do it been mentioned earlier. Admittedly, this does remain true to the points of view of the narrators, but the revelation still feels abrupt.

As indeed do many of the book’s other revelations. It’s difficult to sense the shape of the story because Hestia and Essegui are in thrall to forces they don’t understand, and their narratives do not allow for an omniscient viewpoint to give the reader greater knowledge. This is not as claustrophobic as it might suggest, but it does mean much of the story has to be read on faith.

, Williams uses an invented vocabulary to describe many elements of the world,  her word-choices often giving the novel a flavour similar to Gene Wolfe’s The Book Of The New Sun

. Unlike Wolfe, Williams has not used real obsolete or antique terms. For example, the Changed, the bio-engineered races of humanity on Mars and Earth, include vulpen, kappa and demothea. I googled the last word, wondering if it had any mythological meaning… and discovered that  it’s apparently a boy’s name from the Wild West and means “one who talks while walking”. Which, I suspect, was not the intended meaning in Winterstrike

. None of Williams’ invented terms are glossed, or entirely clear from context; and it often takes a while for their precise meaning to come clear.

more than I did. The Mars Williams has created is bizarre and fascinating, but, while described as a matriarchy, there didn’t seem much that was, well, especially female about it. In fact, for much of the story, Mars might well have been an alien world and its inhabitants entirely unrelated to humanity. I’d like to read the next two books in the trilogy, but I shall not be waiting with bated breath for them. This is not to say Winterstrike

is a bad book, just that I didn’t take to it as much as I had expected. But I may very well try Williams’ other sf novels should I come across them.