After reading the 2011 science fiction novel which prompted my Whores in Space post (see here), I read a 1950s sf novel: This Island Earth by Raymond F Jones. I’ve seen the film several times, and it’s fairly typical of its period – manly hero, women there only to scream, ugly mutant, flying saucer. I read the novel because I’d been toying with the idea of adapting part of it for a short story, and because I wanted to see if it was different to the movie. 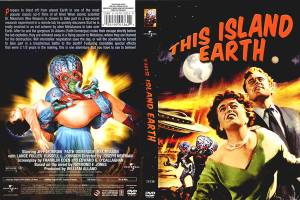 The first half of the film more or less follows that of the book. Cal Meacham is a manly electronics engineer in California. When an order for parts for a project goes awry and he receives instead some devices which are decades ahead of what he is expecting, his curiosity is piqued. He orders a catalogue, and from it he then orders the parts necessary to build an “interociter”. Without actually knowing what an interociter does. The bits are delivered, he figures out how to put them together… and it’s a communications device. Which is promptly used by someone to offer him a job as he has “passed the test”. 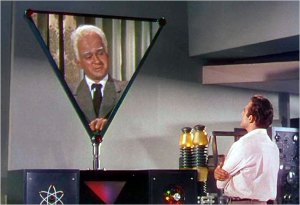 In the film, this is a man called Essex Exeter, but in the book he’s called Jorgasnovara. Exeter is head of a secret thinktank with access to technology more advanced than that known to 1950s USA. Jorgasnovara is head of an industrial plant which builds interociters using technology more advanced than that known to 1950s USA. Both, it transpires, are actually alien and are using the Earth as a supply depot in a war. In the book, the war is intergalactic and between a good bloc, the Llanna, and an evil bloc, the Guarra (whose members also smell bad). There is no Metaluna in the book, and no mutant monster.

This Island Earth was originally published in 1952. It’s a fix-up of three stories published in 1949 and 1950: ‘The Alien Machine’, ‘The Shroud of Secrecy’ and ‘The Greater Conflict’. Meacham fought in WWII, and is determined that the devices invented and built by scientists or engineers should never again be used as they were in that conflict: “like careless and indifferent workmen they have tossed the product of their craft to gibbering apes and baboons”. He is not only an engineer but also fervently anti-war. (But not anti- the occasional need for fisticuffs, however.) His engineering know-how and can-do-it-iveness therefore means he is better than everyone else. Only he knows the rightful use to which the devices he builds should be put. (It is this very arrogance which Jorgasnovara uses to recruit engineers to his organisation.)

And then there are the women…

The lone female in the novel is Dr Ruth Adams. She has a doctorate in psychiatry, but is employed as the assistant to the head of personnel. Meacham is immediately attracted to her. When he picks her up for a dinner date, he considers it “impossible to think of a MD and PhD in that dress”. Surprisingly, Ruth keeps her job after she marries Cal, though she does all the cooking – despite a mention earlier that Cal is capable of cooking for himself. Perhaps it’s unrealistic to expect a strong female character with agency in a 1950s sf novel written by a man, one which elevates engineers to the status of special universe-saving snowflakes. But Ruth’s portrayal still offends – she may be educated, but she’s very much Dale Arden and not Hildy Johnson.

It’s not the only aspect of the book which should upset modern sensibilities. The working class fare badly too. When the plant manager fires an incompetent employee, the union pulls everyone out on strike – despite what appear to be reasonable grounds for termination. And then someone sabotages the assembly line. Meacham immediately accuses the shop steward. Because, of course, manly men of science fiction despise anything that smacks of socialism, and so it naturally follows that a union man would obviously destroy the very factory where he works because management won’t meet his “unreasonable” demands.

Meacham’s manliness and engineering expertise means he never surrenders – always there is a solution, or a means of escape. Ruth, of course, is always the first to scream and give up when the couple find themselves in jeopardy. This also applies to the “Greater Conflict”, which by the final quarter of the book is threatening to destroy Earth. Despite the war having raged for millennia, and involving uncountable alien races far more advanced than humanity (they have giant computers!), it takes a can-do engineer like Meacham to spot why the Llanna have been steadily losing. They rely on their giant computers to determine strategy and tactics. As a result, they’ve become predictable, and the Guarra can guess their every move. They need to act randomly! Like randomly saving the Earth from the approaching Guarra battle fleet!

This Island Earth is not even tosh. It’s desperately old-fashioned, and probably felt so back in the 1950s. The pilotless aircraft which carries Meacham from his company lab to Jorgasnovara’s factory near Phoenix, Arizona, is propeller-driven, though you’d have expected such an advanced organisation to have jet aircraft (which had been flying for nearly a decade by 1952). The science throughout is nonsense: the journey to the Moon, for example, takes all day in one chapter, and mere minutes in another. In the same spaceship. Earth is apparently only a few hundred light years from the edge of the Milky Way (it’s closer to 25,000 light years). But then Jones doesn’t seem entirely sure what a galaxy is, or how great the distances between them (clue: The Andromeda Galaxy is about 2.6 million light years from Earth). Oh, and the interociter turns out to be a telepathic communications device – its use as a videophone is just there to disguise its true function. Except it is later revealed to be a weapon which fires devastating telepathic blasts… which also kill the interociter user…

No wonder the Llanna were losing the war. If only they had recruited a manly engineer from Earth a couple of thousand years earlier.