I forget where I first came across mention of The Steerswoman

by Rosemary Kirstein. It was in the last year or so, although the book was originally published in 1989. I do know that it’s not well known in the UK. But whenever, and whatever, I read about it, I decided it might appeal, and so determined to keep my eyes open for a copy. Which I found several months later in a local charity shop.

It is not a book , if I had known nothing of it, that I think I would have looked at twice. Had I not known of it when I found it in that charity shop, I would not have bought it. I’d heard it was quite good – but how often do you hear that about books, which promptly disappoint? I’d heard it read as fantasy but was really science fiction – but there’s so much room for manoeuvre in that statement, it’s hard to take it as any kind of useful description. Something brought The Steerswoman

to my notice, something persuaded me it was worth reading…

And I’m glad I did. The Steerswoman

is a gem. It’s by no means great literature, but it is most definitely appealing. 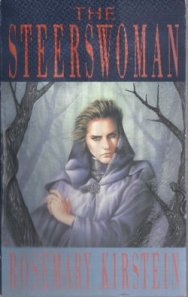 Rowan is the steerswoman of the title. Quite what these are, or how they came about, is never fully explained. They travel the land, observing, gathering facts, drawing and redrawing maps. Any one can ask them questions, and they must answer to the best of their ability. Should, however, they ask a question and are refused, then they can ban that person from ever being answered by a steerswoman again. There are, incidentally, steersmen, but they are greatly outnumbered. (In fact, The Steerswoman

states there are three during the period the story takes place, and that it’s the largest number they’ve had in the organisation’s history.)

While investigating the origin of a strange blue jewel she has found, Rowan comes to the notice of the wizards. She is attacked by one of their soldiers but, with the help of new-found companion, Bel, a barbarian warrior woman from the Outskirts, she fights off the attacker. This only makes her more determined to solve the puzzle presented by the jewel. She returns to the steerswomen’s Archive to discuss her problem with her colleagues.

Bel has told her of a large bed of such jewels in the Outskirts. Rowan and Bel head for that bed, in disguise since the wizards are still after Rowan. En route, they are joined by William, a fourteen-year-old boy who has run away from home with the intention of being taken on as an apprentice by a wizard. He has magic of his own – charms which can do everything from crack stone to make things disappear noisily. En route, they are attacked by more soldiers, but win the fight. They trail the surviving soldier to the wizards’ keep and infiltrate it. But Rowan is captured, and subsequently learns some of the secrets behind the wizards’ powers…

The world The Steerswoman

presents is a standard Dark Ages fantasy. People fight with swords, use candles to light their homes, and ride on horses when travelling great distances. There’s nothing especially original or distinctive about it. The wizards are not the rulers of the world, but they are an elite who appear to control everything. They are also split into two factions, Red and Blue, who periodically fight each other.

is cleverly revealed as science fiction as the story progresses (unlike the cover art to the US paperback). There is nothing overt about this. William’s “charms”, for example, from their description are clearly chemical explosives. The magic lighting in the towns is plainly powered by electricity. The wizards, then, are a technological elite, presenting their science and technology as magic (rather than as, say, divine powers, as in Roger Zelazny’s Lord Of Light 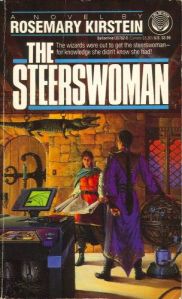 , which opens up its story’s universe in a series of appendices and so becomes almost a space opera; or even the hints dropped regarding the Age of Legends in Robert Jordan’s bloated Wheel of Time series.

is not a novel whose prose shines; but neither does it put a foot wrong. It may resembled some sort of McCaffery sf lite/romance, but it is not in the slightest bit mushy – it features several graphically-described swordfights and a torture scene, for one thing. The protagonists are engaging and the mystery is enticing. I thoroughly enjoyed it.

Kirstein went on to write three sequels to The Steerswoman

and The Language of Power

. All four are available in an omnibus volume, The Steerswoman’s Road

. I shall have get me that omnibus volume. (Edit: apparently the omnibus only contains the first two books. Ah well. I shall try to find all three books, then…)